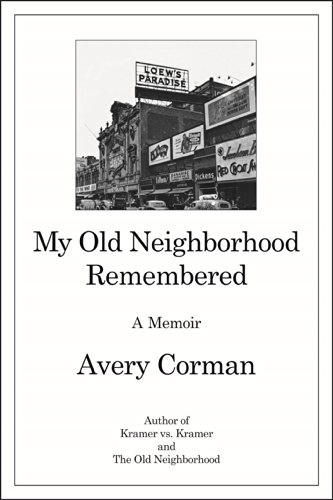 “Corman has brilliantly captured how people spent their time, faced their challenges, and had some fun in the Bronx.”

If you were asked to write a memoir of the place in which you grew up and the events that shaped your early years, could you do it?

Would you remember the details of everyday life, the tone those places created, the feelings they engendered, and your relationships with family and friends? Bits and pieces would come to you but the full story would be hard to access.

A good  “early years” memoir is a difficult one to write. Fortunately, noted author and Bronx, New York, native Avery Corman has skillfully brought his past to the present in  My Old Neighborhood Remembered. Corman catches the borough of the Bronx in a wide-angle freeze frame, infused with rich and succulent memories and observations of this urban landscape.

Why are early years memoirs so difficult to write? An early years memoir is composed of just about everything that is now gone—things that once were, and are no more, but taken together, make up the narrative of the memoir. Much is forgotten and the rest is skillfully suppressed.

If you’re lucky, the place survives (and in this case the Bronx is still very much there), the people (some of Corman’s relatives and friends are still around), and some of the institutions still stand (let’s hear a cheer for De Witt Clinton High School!).

To succeed, the early years memoir requires a certain blend of objective and subjective observation to make it worth reading, as well as to be accurate and believable. While some stories are more compelling than others, they all need to have a reason to put the reader in that place and time, whether it’s the Bronx, San Francisco, or Lawrence, Kansas in the 1860s.

Compare an early years memoir to a professional “look back.” Dean Acheson had an easy time of it in his autobiographical study of the origins of the Cold War and his years at the State Department, Present at the Creation. Records of events, oral histories, conversation notes, regulations and printed decisions were numerous.

Few things are better documented than diplomatic history and government affairs. And few things are more poorly documented than social history and the history of childhood. The place and time in which you grew up—home movies, pictures, errant yearbooks, and old reports cards notwithstanding—the remembrance is almost never rich enough to make a complete story.

Historians, sociologists, psychologists, and those who want to know about an urban childhood would do well to read My Old Neighborhood Remembered, as Corman details the variety of places, things and feelings that made up the everyday world of those who moved from first-grader to teenager in the Bronx of the 1940s and 1950s.

Corman, the author of an eclectic collection, including Oh, God!, Kramer vs. Kramer, and The Old Neighborhood, offers a delicate social and political remembrance. His work demonstrates the gemeinschaft that was the Bronx of immigrants, working and waiting to go up to the next rung, which was often an apartment building with an elevator.

Corman’s inventory of Bronx artifacts is extensive: from the palatial Paradise movie theater, to the small art house The Ascot (where I saw Trash, my first Andy Warhol film in 1969), from Castle Hill Day Camp to the Shorehaven beach club, various “street” games, “Spaldeens,” candy stores, the Yankees, the Giants, the best pizza anywhere, the art deco buildings of the Grand Concourse and what it meant to live on that boulevard, and on and on and on. Corman has brilliantly captured how people spent their time, faced their challenges, and had some fun in the Bronx. It’s different today, but what place isn’t?

The details of his own life are intertwined with his experiences because he’s ably shown us you can’t have one without the other.

A father who left the family when his son was only five, the apartment he, his mother, and sister shared with his deaf-mute aunt and uncle; the less-than-genteel poverty in which he was raised; the tone set by the Jewish and Catholic populations of the Borough; being a kid on the home front; the professional opportunities that were closed to educated Jews; and the small but steady rise in upward social mobility that allowed him to see past the provincial nature of the Bronx to the larger world of NYU and Madison Avenue’s advertising industry—in all this he almost reminds us of Don Draper (but only in good ways).

These are only some of the reasons why Avery Corman is who he is, because not every Bronxite became a distinguished novelist and gave us the character of Ted Kramer, the modern father who fought to be with his son and help put us on a new path of parental rights.

What set Corman apart? Probably many things, and some luck. Perhaps most important was his sense of place in his family. In a direct hit on the third rail of childhood in My Old Neighborhood Remembered, he writes:

“I was always being gathered up. I had no father. I was watched over. The people around me, my mother, my aunt and uncle, would take me along to the movies. And my sister, my cousins, their boyfriends who became their husbands, would take me with them when you might not necessarily take a child, such as when they were going to a baseball game within their own social lives.”

Corman was loved and blanketed with the security of his immediate and extended family, that  probably in the long run helped him to  develop his talent.

A memoir of this quality is an important contribution to what we know about the social history of the Bronx and New York City in the 1940s and 1950s. Those looking to complete the picture which was on the other side of the Bronx political machine of that era will find it in My Old Neighborhood Remembered.