My New American Life: A Novel 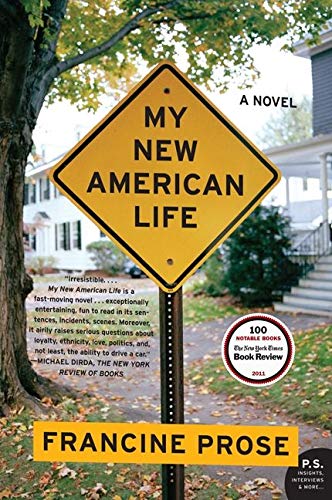 Francine Prose takes the reader right into her story with the very first sentence. Then she goes retro, flitting back and forth between her heroine’s American present and her Albanian past. The writing is stylish, with imaginative metaphors like “too young to have her life fall away in chunks like the crumbling glaciers” and “tears bubbled through the curtains of her little son’s lashes,” and the social satire has a faint echo of Sinclair Lewis’ Main Street about it, as the strong female protagonist tries to take control of her life in a new place.

Lula is 26 and hired as nursemaid, companion, and mentor by Mister Stanley for his 17-year-old son, Zeke. She is a young woman with an answer for everything and a philosophy on life beyond her aseity. The story is set in the Bush-Cheney era to give the satire a certain moral stance, but this immediately begs the question—what’s changed since then? Don’t half-naked fashion models still drink mojitos out of pitchers with their stockbroker boyfriends? Don’t right-wing godfearers on Fox News still call for the repatriation of The Pilgrim Fathers? Doesn’t Guantanamo Bay still exist?

Mister Stanley is an obscure, lonely character. We don’t learn much about him, except that he was once an academic who was headhunted by Wall Street, and he hates his job and the fact that he sold out for the money. His wife, Ginger, went a little crazy with OCD and left him for the cold cleanliness of Norway and, subsequently, the clean dryness of Arizona. Their son, Zeke, personifies that subsection of American youth that would rather watch 70s vampire series on TV than the news—not that the news he’s fed is much more than alarmist fiction. Zeke is a forlorn boy, who doesn’t want to go to college and who likes the music of groups like My Chemical Romance, Sweat Bees, and Dog Breath.

The family has a lawyer friend called Don Settebello, who is doing all he can to get Lula a green card, in between heroic work on the part of political detainees who are being tortured in Black Sites and Guantanamo Bay. There is some emotional and sexual interplay between Lula and the two senior men, but nothing ever comes of it and Lula can’t seem to make up her mind about it.

The daily routines of American life are constantly compared with their parallels in Albania, as Lula contemplates her past life and tries to imagine her future one. To begin with, she gives us facts about her home country in a way we hardly recognise as pontificating and the pretty similes continue “like drinking velvet or pipe smoke or liquefied brocade” but, eventually, the juxtaposition gets a little intrusive and only serves to slow the pace down.

When three Albanian “brothers” turn up at Mister Stanley’s house and ask Lula to do them a small favor, this sets in motion Lula’s longing for their leader, Alvo, a man with just the right combination of brooding danger and perfect gentleman to fit straight into a Catherine Cookson or a Jane Austen.

Lula’s adolescent feelings for Alvo, obsessing over him like a schoolgirl, clashes awkwardly with her woman-of-the-world persona and, by the halfway point in the book, the story begins to get just a little blasé and the dialogue a little constructed and lecturing. It reads, at times, like a pleasant conversation between a few loosely associated acquaintances and the constant boasting, albeit humorously, about the terrible quality of life in Albania during and after Communism, begins to get a little tired.

Although someone keeps visiting Lula’s room while the house is empty, nothing much happens until halfway through Chapter 10. Lula’s detailed thought processes and memories become a little repetitive, with every little step and pause and nuance being analysed into oblivion, and I desperately wanted the story to move faster.

Then, all crazy hell breaks loose when the hilarious Ginger turns up and, for a few pages at least, the reader gets a glimpse of blue in an otherwise grey sky. I wanted to read more about Ginger. Were her sunken loins and her droopy ass and her foul mouth and her crazy shit-and-chocolate-covered body a metaphor for America itself? Sadly, she disappears into the backstory as quickly as she emerges from it and, after her, Lula’s girlish wishful-thinking and Zeke’s callous adolescence and Mister Stanley’s greyness and even Alvo’s charm seem to become even more insignificant than they were previously.

Luckily, the book retains its sense of humour and the hilariously coincidental episode at Zeke’s college and the subsequent courtroom sequence restored my initial enthusiasm. Eventually, the too-good-to-be-true Don Settebello and Mister Stanley show their true colors and a life with Alvo turns out to be a dead end. Lula’s temporary salvation finally comes in the pseudo-sophisticated form of her old Albanian friend, Dunia, who falls on her financial feet in an unexpected and unlikely way.

My New American Life is chick lit with an aroma of pickled cabbage and fërgesë e Tinanës about it, tracking Lula, as she metamorphoses from a third-world immigrant who’s happy to have her own room and en-suite in a nice house, into a bored and self-obsessing American who longs to be like everyone else in her new home. It’s a behind-the-curtains look at American middle-class life, through the eyes of a stranger—a lenient exposé of modern America, drawn against the bleak backdrop of modern Albania and posing the premise that, although it may suck here sometimes, it sucks far worse in other places.

Despite its shortcomings, I liked this book—something I rarely get to say nowadays.