My Name Is Victoria 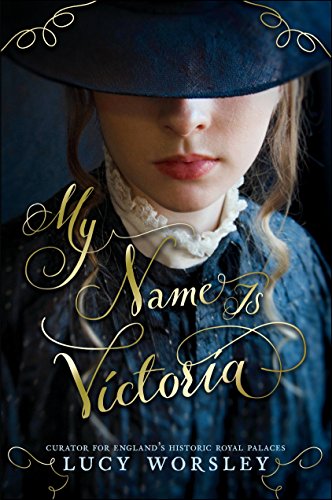 At the age of 12, Victoria Conroy is brought to Kensington Palace by her father, Sir John Conroy, as companion to another little girl, also named Victoria.  To differentiate between the two, Victoria Conroy is forever after referred to as “Miss V” even by her father. She also brings her pet dog, Dash, not realizing she will be forced to present the little animal to Victoria as a gift. Miss V relinquishes not only her pet but part of her identity to her future queen.

Though she rationalizes otherwise, Miss V is to be a spy for her father, reporting daily on what the princess and those around her say and do. That is one of the Kensington rules, she is told, and though she may disagree with part of them, she follows as best she can.

The princess is of a delicate disposition, prone to fits of temper, and all fear she carries the same seeds of madness as affected old King George.  Indeed, any time the princess veers from expected and required behavior (as 12 year olds occasionally do), everyone worries that this madness is manifesting itself.

At this stage in her life, Princess Victoria doesn’t want to be queen. It’s the adults in her life who hope for that prize.

“I don’t want to be queen!’ she bawled. “I just want to go to balls and parties and live like other children do, with a mother and father.” Floods of tears ran down her face.

“There is no ‘want” about it,” Lehzen said, sternly. “Girls in your high position cannot want things. They can only do their duty.”

Miss V is both startled and surprised by this reaction.

“I looked at her and tried to imagine that sulky little figure wearing a crown. It seemed impossible that such a thing should ever come to pass.”

Miss V isn’t entirely unsympathetic to her sovereign-to-be’s plight, however, and the two eventually become close. The girls occasionally rebel and get into minor scrapes for which Miss V is severely reprimanded by her father. There’s an assassination attempt, veiled threats from Victoria’s Cousin George. Once in a while, someone actually mistakes Miss V for the princess and that also leads to serious problems. (Miss V even impersonates Victoria at a party and the guests are none the wiser.) Miss V and the Baroness Lehzen become allies of sorts in their concern for Victoria.

Although it seemed conceited to admit it, and I would never have said the words aloud, I realized it was true. Lehzen and I counterbalance the powerful personalities of the counte4ss and my father, and made Victoria’s life possible. Not happy, not carefree, but possible.”

It’s only when Victoria comes of marriageable age that problems really start.

Victoria falls in love with Prince Ferdinand of Saxe-Coburg, only to discover he’s already betrothed to the Queen of Portugal. In spite of this, he carries on a very serious flirtation with the English princess, capturing, then breaking her heart when he marries. Soon afterward, another potential suitor appears, Prince Albert of Saxe-Coburg, but he’s even less suitable as far as Victoria’s concerned. With his brother, he comes to visit, and falls madly in love, not with Victoria but with Miss V.  Victoria thinks him dull and uninteresting, “soft and girlish”, and not handsome. Miss V reciprocates Albert’s love. They correspond. He visits again and asks her to marry him.

What’s a girl to do? It’s obvious Albert is destined for Victoria though neither cares a whit for the other. Miss V’s heart is breaking. She begins to question whether the things her father is doing are right. Then she discovers a Conroy family secret that has been kept well-hidden. With it, Victoria herself offers a solution no one would ever have imagined.

Though aimed at the teen audience, this delightful and imaginative story will also entertain adults. Told from Miss V’s point of view, it paints Victoria and her entourage in ways history books have never done, especially Sir John Conroy, who is a more subtle schemer when entrusting his daughter to be his spy, than he is in his dealings with adults.

This Victoria isn’t the feisty young monarch as portrayed on Masterpiece Theater, but a spoiled, high-strung child accustomed to be given her way in anything that doesn’t go against Conroy’s wishes, while being cosseted and protected from the real and supposed dangers of her other relatives hoping to become supreme monarch.

Author Worsley, curator for England’s historic royal palaces, brings to live those inhabiting Kensington Palace, as well as the other residences where Victoria lived before becoming queen. She’s given this story historical relevance and accuracy, while weaving a delightful fantasy about the woman who became one of the United Kingdom’s most famous monarchs. The relationship between the two main characters as well as the imagining of a love triangle is a most delightful and original twist to an alternate history novel.

How does Victoria resolve the problems for herself, Albert, and Miss V? That, dear reader, is for you to find out on your own. Within the pages of My Name Is Victoria lies the answer.