My Name Is Lucy Barton: A Novel 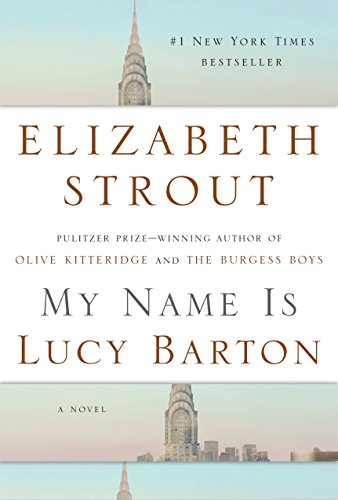 The simple sentences and unspoken words of My Name Is Lucy Barton are deceptive. Between the lines, from the presumably limited vantage point of a young woman confined for nine weeks in a hospital bed, this new novel by the Pulitzer Prize-winning author Elizabeth Strout brilliantly reveals depths of pain, yearning, love, and insecurity stretching across three generations.

Consider the complex mother-daughter relationship evoked by one typically exquisite and understated passage. Lucy narrates in first person as her mother opens her eyes from what was probably a feigned catnap in a chair by Lucy’s hospital bed:

I said to her, “I have a friend, Jeremy. He used to live in France, and his family was part of the aristocracy.”

My mother looked at me, then looked out the window, and it was a long time before she said, “So he says,” and I said, “Yes, so he says,” in a tone of apology, and in a way that let her know we need not discuss him—or my life —any further.

A less-skilled writer would have stopped with the first “So he says,” emphasizing the daughter’s futile bid for admiration (I have a friend who’s a French aristocrat!) and the mother’s put-down. But Strout twists the spiral again and again, until the mother ends up being an object of pity, not power.

Throughout much of the novel, Lucy is recalling her childhood of almost incomprehensible poverty in rural Amgash, Illinois. For the first 11 years of her life, Lucy, her parents, her sister, and her brother lived in a garage with “only a trickle of cold water from a makeshift sink.” Even when they moved into a house with “hot water and a flush toilet,” there was little heat, not enough food, and no television, books, or magazines.

It was a rough life emotionally, too. The hospitalized Lucy tosses off a few quick memories of being locked for hours in her father’s truck and a passing reference to how her mother “on occasion and without warning . . . struck us impulsively and vigorously, as I think some people may have suspected by our splotchy skin and sullen dispositions.”

One of the books’ few jarring missteps is that Lucy seems to spend more time regretting the social graces that she missed out on. “How do you know if you are chewing with your mouth open if no one has ever told you?” she muses. “If you have never heard a living soul say that you are pretty, but rather, as your breasts develop, are told by your mother that you are starting to look like one of the cows in the Pedersons’ barn?”

Lucy escapes her upbringing in the classic manner of fiction, by being such an outstanding student that a school mentor helps her win a scholarship to college. Marrying into the middle class, she lives in Manhattan with her husband and two young daughters.

Yet when mysterious complications from appendicitis keep Lucy in the hospital, it is her mother who suddenly appears and stays besides her bed, almost nonstop, for nearly two weeks. And although her mother can never say the words “I love you,” it is that reunion that breaks Lucy’s heart with joy:

My mother shook her head, looked out at the lights. “Wizzle, stop.”

“When your eyes are closed,” she said.

“You love me when my eyes are closed?”

“When your eyes are closed,” she said. And we stopped the game, but I was so happy—

As an adult, Lucy will repeat her desperate grasping for love by projecting onto the doctor at the hospital and her writing teacher an emotional connection they may or may not actually share with her.

In her relationships—with her mother, her father, the doctor, the teacher, an artist friend, and her husband—the strongest emotions come from the words that are not explicitly spoken. That is this novel’s greatest strength, as well.

The major flaw, in fact, is that the author tacks on too many words in the last 20 or so pages.

But overall, Strout—the bestselling author of Olive Kitteridge and The Burgess Boys—has produced another masterpiece.