My Mother. Barack Obama. Donald Trump. And the Last Stand of the Angry White Man. 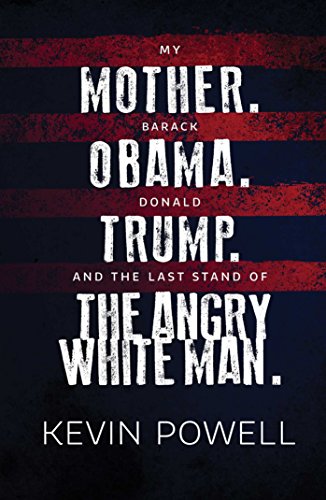 “This book of essays reaches out to Americans of varied ethnicity and backgrounds with the goal Powell’s mother set for him as a child: to overcome all obstacles to tell the unvarnished truth.”

Author Kevin Powell first made a name for himself appearing in the debut television season of The Real World: New York more than a quarter of a century ago. Now he is far better known for his writing—he has more than a dozen books to his credit, is a blogger with his own podcast, and has penned scores of articles for leading periodicals such as the New York Times, the Washington Post, Utne Reader, Esquire, Ebony, ESPN, and Newsweek. Here he has gathered a baker’s dozen of some of his most trenchant essays over the past three years, revealing ugly episodes in his own life while sharing his candid perspective on celebrated black athletes and musicians, American history, race relations, rampant sexism, and divisive politics.

This collection of essays should captivate readers from the get go. He starts with a brutally honest self-evaluation, “Allow me to re-introduce myself.” Life for him began with few prospects for success—a poor, black, only child raised in a rat-infested New Jersey ghetto by a single mother on welfare.

His evocative writing style seems perfectly matched to his personality and the hip-hop music scene he has covered throughout his career. Yet he now sees most of his life and the macho American culture he grew up in through a different lens: the #MeToo movement.

Powell has evolved into a widely traveled activist for social justice and motivational speaker. He takes pride in his extraordinary accomplishments in a world where he was conditioned to believe he would die young. But Powell also shares the personal demons he battled to reemerge today with an urgent message dedicated to “the rainbow children—today, tomorrow, in the future,” a message that echoes the motto of BK Nation, the civil rights organization he co-founded: “The leadership is us.”

In “Letter to a Young Man,” Powell reveals an ambitious goal--challenging entrenched misogyny, sexism, and homophobia to recognize women and gays among his equals, while acknowledging his own past failures: “There are lessons everywhere, if we are willing to look, willing to listen.” Readers are urged to take that journey of self-exploration, too.

He then takes the reader back to his—and America’s—roots. “Will Racism Ever End? Will I Ever Stop Being a Nigger?” and “Why is Baltimore Burning?” are as soul-wrenching as Ta-Nehisi Coates’ 2015 bestseller, Between the World and Me.

The essay on O. J. Simpson’s rise and fall is just as strong. Like Coates, Powell demonstrates both historical perspective and a keen eye for how current events fit into centuries of the white supremacist narrative that is our cultural heritage. Despite recurring setbacks, he notes substantial progress, citing Obama’s 2008 election as a previously unimaginable pinnacle of success for Americans dreaming of a post-racial nation.

Unlike Coates, Powell believes racism can be eradicated with sustained effort. Yet he sees it as a Herculean task given the baggage he himself carries after years of therapy, the baggage that weighs down so many poor black men in America who “inherited nothing except the color of your skin and a target on both your forehead and your back.” Powell has seen too many friends doomed to short lives, prison or drug addiction after being “drop-kicked into a globe dominated by a mountaintop of things White male-ish and rinsed in power and privilege.”

Even among those who seemed to have made it, he notes many felled by “self-hatred and self-sabotage.” Powell sees men like Bill Cosby and O. J. Simpson emulating the worst traits of sexist white men of wealth and power. He calls their predatory behavior “toxic manhood” naming among numerous practitioners former President Bill Clinton, movie mogul Harvey Weinstein, and President Trump.

Powell is as comfortable when focused on superstar athletes as he is when writing about music, American racial history, and politics. He sees hip-hop as a cultural prism encompassing “our language, our value system, our way of seeing the world.” His assessment of quarterback Cam Newton brims with illuminating detail. Praise of Newton’s successes on and off the field comes with unflinching criticism of his failures--mirroring Powell’s own penchant for raw self-critique. Again, Powell steps back to condemn the gladiator sport that leaves so many former athletes broken and forgotten.

The lengthy essay on Cam Newton also places the loved and hated black superman in historical context. Powell draws from a wealth of sports knowledge as he compares Newton to trailblazing African American athletes dating back more than a hundred years. These include Muhammad Ali’s controversial idol, heavyweight champion Jack Johnson, the Jim Crow era boxing phenomenon whom filmmaker Ken Burns brought back to national consciousness in 2005 with “Unforgiveable Blackness: The Rise and Fall of Jack Johnson.”

(The recent pardon of the Galveston Giant by President Trump illustrates Powell’s point about the black-white divide; President Obama would clearly have faced heavy backlash if he pardoned Johnson for flouting the mores of his day by taking a white woman across state lines for immoral purposes).

The final essay is new and bears the same name as the book, the personal/political musings Powell pledged on the cover about his complex relationship with his tough-loving mother, the extraordinary promise and shortcomings of her hero Barack Obama, and the ugly familiarity to people of color of the Trump presidency. Powell views Trump as simply resurrecting more crassly the “racism and hate and fearmongering” that white male politicians have relied on since this nation’s founding to maintain a capitalist system “built to protect a few at the expense of the rest of us.”

Yet Powell remains hopeful that we are seeing “the last stand of the angry white man.” Why? He points to the #MeToo movement, the #TimesUp surge of female candidates and the emergence of dynamic young activists on the national scene like the passionate spokespersons for gun control who survived the massacre at Stoneman Douglas High School in Parkland, Florida. But he does not expect them to succeed alone.

In another essay in the book Powell recalled his astonishment at Lin-Manuel Miranda’s audacity in casting blacks and Hispanics in Hamilton as the nation’s founding fathers. But then Powell got the point. The cast best fit lyrics drawn from the streets and written to be rapped to hip-hop music or sung as R&B ballads. Miranda revolutionized Broadway musicals to match the multiculturalism of the American people and to electrify (largely white) audiences with the fierce urgency and daring of the colonists who risked their lives to establish this country. Powell seeks to carry forward that revolution.

This book of essays reaches out to Americans of varied ethnicity and backgrounds with the goal Powell’s mother set for him as a child: to overcome all obstacles to tell the unvarnished truth. Powell does indeed speak with a powerful, authentic voice like those he admires in Muhammad Ali and Colin Kaepernick: “A Black man who is able to look you square in the eyes, say what he feels without apology, and smile in a . . . way that . . . will make you uncomfortable.”

Lise Pearlman's most recent book is Call Me Phaedra: The Life and Times of Movement Lawyer Fay Stender, winner of the 2018 International Book Award for Biography. Her other literary awards are for books on law, history, and multiculturalism. She has practiced law and from 1989–1995 and served as the first Presiding Judge of the California State Bar Court.