About My Mother: A Novel 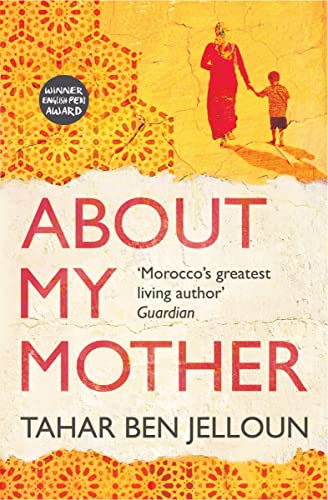 Moroccan writer Tahar Ben Jelloun is an award-winning internationally bestselling author who has been regularly shortlisted for the Nobel Prize, among others. Readers who enjoy cross-cultural novels, have been to Morocco (or wish to go), and want to know more about life in a conservative Muslim country will be drawn to his story about a devoted son and the life of his dying mother.

There are some wonderful episodes recounted by Tahar, the son-narrator. They have to do with everything from family relations, friendships, gender roles, marriage rituals, mother love, and more. That’s the good news. The bad news is that like the narrator, readers must suffer through the long, slow, agonizing demise of his mother who has end-stage Alzheimer’s.

Lalla Fatma, the narrator’s mother, thinks she is in Fez in 1944 where she grew up throughout much of this rather laborious mother-son story. She speaks to and about family members both living and dead, yearns for her first love, berates her nasty caregiver, and occasionally returns to lucidity.

Tahar visits regularly (unlike his siblings) and listens to his mother’s long-hidden secrets and stories, including those of her widowhood at age 16 and the two husbands who followed. He comes to know about his mother’s life in post-war Morocco and to understand why resignation to her fate in a culture of female containment was her only way to survive.

He also listens to her imaginary conversations, hallucinations, and redundant rants with extraordinary patience. The problem is readers are unlikely to share his good grace. After all, Lalla Fatma is not their own suffering mother and therefore the repetitive nature of this tale renders the author’s work a challenge and a disappointment.

The strength of this novel lies in explaining Moroccan culture. For example, in comparing how elders are treated there in comparison to other places, Ben Jelloun writes, “In Morocco, besides the love of God, we’re taught an almost religious reverence for our parents. . . . We live in fear of one day being denied our parents’ blessing. In the west [this] seem ridiculous, or psychologically unacceptable. . . . That doesn’t mean there are no problems or arguments, but we cultivate love above all. . . . Filial love is a bond that can’t be quantified. You accept it as life’s gift and do your utmost to be worthy and proud of it.”

This kind of passage, which occurs early in the book, is enlightening, purposeful and promising. But the story soon offers less of this kind of insight and devolves into pitifully repetitive whining sessions with Tahar’s mother, coupled with the verbal aggression of her caretaker, Keltum. It seems to serve no purpose and to offer no new enlightenment.

Given the accolades this author has garnered, it seems disrespectful to say that the story needed more character development, perhaps a subplot or two, or more humor. But as Tahar’s mother proclaims near the end of the story, “Keltum’s bored. [A relative] is bored. And I’m bored.” Alas, it seems likely that many readers will be, too. That’s a sad way to leave a book that could have been truly beautiful.

Elayne Clift’s award-winning short fiction has appeared in numerous literary magazines and anthologies. She has just completed her first novel, Hester’s Daughters, based on The Scarlet Letter. She reviews fiction as well as nonfiction for the Brattleboro (VT) Reformer.