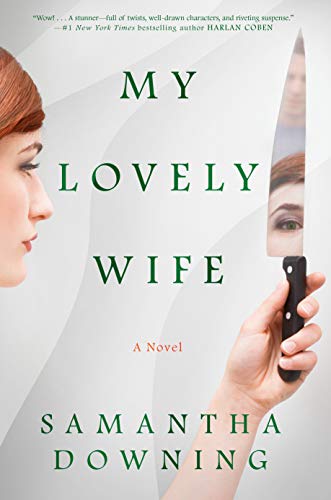 “My Lovely Wife is a fascinating combination of reversals, reveals, and bad behavior that keeps us on the edge of our seats.”

What kind of woman commits an unspeakable crime? Can a loving mother be a murderer? Would she kill, not to defend herself or her family, but simply because she can? Samantha Downing answers all these questions and more in her startling debut novel, My Lovely Wife.

Told from the point of view of the nameless husband, My Lovely Wife

turns domestic suspense on its ear. Though the husband participates in the increasingly violent acts, it is the wife, Millicent, who dictates the rules of the game.

Early on, a friend of the couple makes a statement that perfectly explains both the events in the book and our own compulsion to keep reading.

“What’s necessary is the promise of sex. Or violence. Or both. And a story line—you have to have a story line. It doesn’t matter if it’s real or fake or who’s telling it. You just need people to care what happens next.”

What’s real and what’s fake aren’t clear. Both Millicent and her husband lie to each other and everyone around them. They make plans—horrific plans—then change them, making outcomes even worse.

But we definitely care what happens next, so much so, that we’ll keep reading, even when we think we shouldn’t.

A compulsive page-turner, My Lovely Wife is part guilty pleasure, part dirty little secret, because admitting you want them to get away with it makes you complicit in their heinous acts.

Neither partner is innocent, but as you become immersed in their unfolding story—unable to put the book down—neither are you.

Downing’s ability to surprise the reader and focus in on the darkest aspects of human nature combine to create a standout in the crowded list of domestic suspense titles. It also makes for a very scary marriage.

“I replayed (her) murder in my head. Every time I did, I thought about how fantastic that day was, how we came together and did what needed to be done to protect ourselves. To protect our family. It was amazing. And so very sexy.”

And what a family it is. The children aren’t typical suburban kids. But what would you expect with sociopaths for parents? Part of what makes the novel so terrifying is how “normal” the whole family appears on the surface.

Dad is a tennis instructor. Millicent sells real estate. The children are . . . well . . . children. Except one behaves badly and the other hides a knife under the bed.

As the narrator remarks about his son, “I should have seen this coming. Should have seen it the day he was born. He was so quiet at first everyone thought he was dead. When he finally did cry, it was so loud it made my ears ring.”

We feel a little bit like that each time the plot twists and turns. We think, why didn’t I see this coming? But the story takes both the narrator and the reader by storm, hitting so fast it’s impossible to stop and think.

There are two ways to show character development in fiction. One is to have a character change, so the reader experiences their personal growth. The second is to reveal deeper truths about a character. The character hasn’t changed, only the reader’s understanding has.

Downing capitalizes on both. The characters do change, especially our first person narrator. But even more compelling is how little he knew about the woman he married and what she is capable of.

Hand-in-hand with our guide, we peel back layers of Millicent’s story. As we come to know her, we begin to forgive the crimes the husband commits because hers are so much worse.

My Lovely Wife is a fascinating combination of reversals, reveals, and bad behavior that keeps us on the edge of our seats. A book that will keep you guessing, force you to keep reading, and might just make you go to bed with the lights on.

And it’s definitely guaranteed to make you wonder a little bit more about your neighbors and what they might be doing behind closed doors.