My Life in Middlemarch 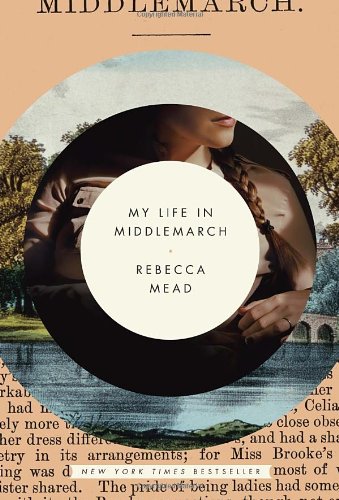 “Consider the brilliance of this dynamic that Mead has brought to bear on the novel, on her own life, and on literature! A vast range of intersubjectivity is suddenly energized, waking up the reader’s mind, powering thought. This is what literature and the reflection on literature is all about . . .”

In the novels of Vladimir Nabokov two characters dispute most of the action, but it actually takes place in the mind of a third character, who remains imminent and invisible to both the protagonists of the novel and the reader.

This state of affairs, says Rebecca Mead in My Life in Middlemarch, is what all life is like. We observe reality in the form of a dialogue between ourselves, the characters we create (our “personae,” if you like), and art. The book is the liveliest consideration of life and literature that we’ve seen in decades, and deserves a serious critical reading.

The complex network of ideas that Mead builds up in the book goes well beyond any discussion of “mimesis,” or the way in which art imitates life. The boundaries between life and art cease to exist, and we confront intersubjective, intertextual space.

Mind you, the narrator of My Life in Middlemarch would vehemently deny that anything like this is happening. Like the narrator of Nabokov’s Pale Fire, who builds up a wild fantasy about being himself a king and making the poem that begins the novel into his epic, the “I” of My Life in Middlemarch carefully constructs a kind of “Olde England of the mind,” filled with bourgeois reflection and pedestrian literary tourism related to the novelist.

The narrator mentions only in passing that she “studied the application of the tools of psychoanalysis or feminism to reveal the ways in which the author was blind to his or her own desire or prejudice, or they used the discipline of deconstruction to dispense with the author altogether . . .” The narrator is scornful about such influences, like the would-be king in Pale Fire dismissing those awkward reminders that conflicted with his fantasy. . . .

You see how the varied narratives that comprise our consciousness mingle, and how adept Mead is at pulling them all together. But what of Middlemarch in all this?

George Eliot is one of the greatest novelists who ever lived, and fellow novelist D. H. Lawrence hit on the reason why in a nutshell: “It was she who started putting all the action inside.”

The movement of the narrative to interior monologue, which began in France, took a giant step forward with Eliot’s work. She was not only intent on the description of feelings, second by second, but she was fantastically artistic at conveying them: “Dorothea glanced quickly at her sister. Across all her imaginative adornment of those whom she loved, there darted now and then a keen discernment, which was not without a scorching quality. If Miss Brooke ever attained perfect meekness, it would not be for lack of inward fire.”

Describing the character in Middlemarch Will Ladislaw: “When he turned his head quickly his hair seemed to shake out light, and some persons thought they saw decided genius in this coruscation.”

Writing of the hypocritical character in Middlemarch, Bulstrode: “He was simply a man whose desire had been stronger than his theoretic beliefs, and who had gradually explained the gratification of his desires into satisfactory agreement with those beliefs . . . If this be hypocrisy, it is a process which shows itself occasionally in us all, to whatever confession we belong.”

Compare this kind of writing with the Dickensian characterisation of Pecksniff – great in its own way, certainly, but you see why novelist Virginia Wolff wrote of George Eliot that she was the first English novelist who “wrote books for adults.” Her work is traversed by a range of social, philosophical and ethical themes, and, in Middlemarch, these find expression in the portrayal of a classic and almost timeless British country town. All its social strata, class issues, economic conflicts, and the kind of fine emotional and social observation that we associate with Jane Austen—all are brought out in this novel.

And, yes, as the blurbs have it, there’s more! Not enough can be said about the German influence on Eliot, who also brought Bildung into English novel. And there is ample room for feminism and the development of women as well.

Middlemarch is, indeed, a novel that one reads more than once in one’s life, and which contributes to one’s thought in different ways at different times. Even the limited and boring narrator that Mead creates in My Life in Middlemarch manages to bring this out, and it was masterful of Mead to create the two-sided Hegelian dialogue with its unspoken third dimension in this way.

But from Mead’s point of view, this does not matter, because we can regard the narrator’s experiences, in reaction to reading Middlemarch, much more accurately if understand the narrator’s limitations. The narrator is, at least, a learned biographer of Eliot, and she is astute at relating the biography to passages in Eliot’s writing.

For example, she tells the story of Mark Pattison, the Rector of Lincoln College at Oxford, on whom the character of Casaubon, the middle-aged man who marries the young protagonist of the novel, Dorothy, is probably based. This is fascinating work, tying history to fiction, but the narrator sees Dorothy-Casaubon-Pattison as part of her own life as well.

At 20, she did not find Casaubon to blame for marrying one so much younger: She too would have considered marrying someone older to get guidance and an intellectual ticket to ride. At 30, on the other hand, rereading the novel, the narrator had only scorn for Casaubon. At 40, approaching middle age, there is empathy.

All of this intertextuality, history, life, and literature is beautiful. But there is still the dynamic of the author and the imminent viewer to bear in mind. The author may see her narrator as a purveyor of limited conventional reactions— in fact, just the sort of reader that Eliot would not have wanted.

The viewer, on the other hand, could be male: Now males are known for a very different sexual attitude toward younger women. Surely the male view of the narrator would be quite different? But even allowing for a female viewer, a broader, more sophisticated range of reactions could be brought to bear.

Consider the brilliance of this dynamic that Mead has brought to bear on the novel, on her own life, and on literature! A vast range of intersubjectivity is suddenly energized, waking up the reader’s mind, powering thought. This is what literature and the reflection on literature is all about, and it is Mead’s achievement to have made it happen outside the halls of academe, where we can all enjoy it.