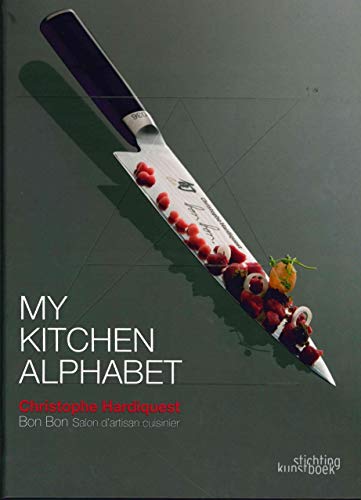 “This is how modernism works. It is an ongoing conversation among the chef, the diner, the ingredients, and our collective memories.”

Because the best of the genre—like My Kitchen Alphabet by Christophe Hardiquest—have something to teach us.

Mr. Hardiquest, the chef and owner of the two Michelin-starred Bon Bon in Brussels, Belgium, has written this cookbook to mark the 15th anniversary of his acclaimed restaurant. A still young chef at 35, Hardiquest is firmly in the modernist camp.

Like his cooking, the book is a work of art. It is thoughtfully conceived as an A-Z filled with insights into his creative process, his cooking philosophy, and beautiful photographs of his favorite dishes. And like the trilingual city that is Brussels, it has been written in French with English and Dutch translations conveniently included on the same page.

Take your time with this book and you will begin to appreciate what modernist cuisine has to offer. In fact, that may be why he chose the A-Z format in the first instance—it reminds us that just as you need to learn the alphabet before you can begin to read, you must break down the modernist style of cooking into its component parts before you can fully appreciate the whole.

Modernist cuisine is to the culinary world as conceptual art is to the art world: Both take us out of our comfort zone and require us to look or experience something familiar in a new way.

For example, things are not always as they appear: Under “R” for Rock ’n Roll the dish Metal ica Red Snapper looks like the fish is wrapped in aluminum foil. The diner might be tricked into thinking she has to unwrap it. But no, it’s edible silver. Or as in Malines Asparagus à la North Sea under “A” for Asparagus what looks to be a line of sand on the plate is actually an edible mixture of buckwheat flour, ground almonds, butter and salt. When eating in a modernist restaurant, check your assumptions at the door.

You might also find dishes that are old standbys that have been completely deconstructed like Beef Tartare as I Like It: All the familiar elements are there (beef, capers, shallots plus a few surprises) but instead of being incorporated each ingredient is scattered separately on the plate. It’s both familiar and yet not quite.

Which brings us to the notion of past and present. For Christophe Hardequist—and his modernist brethren—borrowing from the past to create something new as a bridge to the future forms the basis of his creative process. Under “I” for Identity and Inspiration he writes, “It’s important to have a memory for flavours. We need yesterday to comfort us today and to take pleasure in the food of tomorrow . . . but the interest in going back to the source is about being able to move away from it.”

Which is why you will find some typically Belgian dishes at Bon Bon that have been completely reimagined. As in “G” for Gauffres (waffles) for instance. Instead of a sweet waffle with whipped cream, Chef Hardequist takes our memory of Belgian waffles and turns it into Brussels-style Smoked Eel Waffle with Argan Oil and Chantilly Cream. It is informed by the past, but has moved beyond it.

This is how modernism works. It is an ongoing conversation among the chef, the diner, the ingredients, and our collective memories. And it is often quite playful. This conversation is why Christophe Hardequist works in an open kitchen—a workshop full of artisans as he prefers to think of it—that looks out onto the diners. His aim is to be completely transparent and open to his customers. What you see at Bon Bon is an experienced team who quietly (albeit intensely) perform their work in plain view of the diners. There is no room for drama during the dinner service at Bon Bon.

But lest you think this book is all work and no play, take time to study some of the plating compositions or the photo of the Bon Bon staff under “E” for Equipe (team) that is either a riff on George Seurat’s A Sunday on La Grande Jatte or a still from a Wes Anderson movie. Either way it’s a good reminder that whether you are an acclaimed chef or eating in an elite restaurant, none of us should take ourselves too seriously.

Modernist cuisine may not be for everyone. But if you want an evocative experience rather than just another meal, then knowing something about what a chef who cooks in the modernist idiom is aiming for, you are bound to get more out of the evening than someone who is just there because they want bragging rights for having eaten at a top-rated restaurant.

It may not have been Chef Hardequist’s express intention when he set out to write an anniversary cookbook, but My Kitchen Alphabet is one of the best explications of modernist cuisine that has been written. Even if you never plan to travel to Brussels, this is a book that is well worth your time.

But if you do go, be sure to remember that in Brussels, “B” is for Bon Bon.