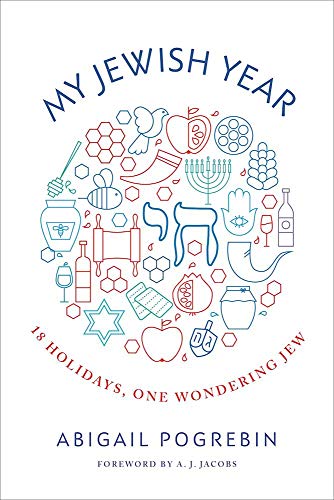 “Nearly every holiday magnified not just a personal gratitude, but a larger one . . .

. . . That a people survived: the siege, the breach, the burning, slavery, crusades, pogroms, camps, ambushes, bus-bombings and Kosher market attacks.

. . . That we get another day, not just to live more, but to love fiercely.

. . . That we gather repeatedly to pound on our chests in unison, eat in makeshift huts, cavort with Torahs, light menorahs, break matzo, recite names, study into the dawn.”

There are many Jewish holidays during a year, beginning with Rosh Hashanah. Each holiday has a separate meaning, including relevant rituals, prayers, cultural observances, and community interactions. Any learning experience into the heart of the Jewish people requires immersion within the history, customs, duties, and dictates of each holiday.

Abigail Pogrebin has produced a book filled with wide-ranging explanations from the scope of contemporary Judaism. My Jewish Year is a tender, inspiring and educational adventure into a year of devotion and understanding. Pogrebin admits that she knew little about the purpose and relevance of each holiday. This curiosity produced My Jewish Year, based upon intensive investigation, reflection, and writing about the milestones of each holiday.

Each major Jewish holiday carries a specific, often poignant meaning. These holidays pull at our heartstrings and motivate us in ways that might be difficult to comprehend absent the experience of growing up in a reasonably observant Jewish home. Most Jews learn the basics of holidays, but without comprehending the deeper meaning underlying them. Author Abigail Pogrebin immerses herself into the history of each holiday, focusing on its deepest meaning as a way not only to extend and make more relevant her experiences as a Jew, but also to reflect upon it and share her results with the world.

Jews are very good at recalling their struggles, from slavery in Egypt to receiving the Ten Commandments; from captivity with Babylonians, Greeks, and Romans; to destructions of the Temple in Jerusalem. From the Crusades, Spanish Inquisition, English Expulsion and the Reformation . . .  eventually to the Shoah and the terror tribulations of contemporary Israel, the struggle to survive seems endless. And observing holidays is arguably the foundation of what it means to be a Jew.

Many people raised in a Jewish home assume that they know what it means to be a Jew. But in most cases, it’s a struggle to comprehend the deeper meaning of holidays. As the scaffolding that has supported the Jewish people for more than 3,000 years, Jewish holidays helped Jews to continue to observe their religion during the Diaspora, when synagogues and Jews alike were burned; when the punishment for being Jewish was often death. And the same holidays serve to enlighten Jews today.

Most of the minor holidays put an average Jews’ knowledge to shame. A lifelong Jew, for example, might easily explain the roots of major holidays, such as Rosh Hashanah, Yom Kippur, Hanukah, Purim and Passover. That same person, however, may be clueless to the meaning of Lag B’Omer, Tu B’Shvat, Shmini Etzeret and other minor holidays. Author Pogrebin produces Jewish wisdom as explained by gifted historians, sages of the ancient past and from the insight of today’s rabbinical leaders. It’s an intimate journey into Judaism that will enlighten and engage every reader.

In My Jewish Year, author Pogrebin completes a one-year sojourn into the heart of Judaism by immersing herself into each of the Jewish holidays as deeply as possible. She illuminates signposts left for us by learned Jews and ancient rabbis. We learn by doing and Pogrebin does each holiday with gusto, revealing history and customs so that their ultimate message is understood.

Abigail Pogrebin is a gifted wordsmith. Her one-year exploration into Jewish holidays is at times amusing, irreverent, evocative, fascinating, and enlightening. She proffers an intimate and deeply personal understanding of her own Jewish experience; and she delivers a depth of understanding of Jewish holidays, laws, rituals, prayers, and behaviors, made more relevant by commentaries and explanations from wide-ranging perspectives. Perhaps the book would be made somewhat more personal by adding pictures, maps, diagrams, and other visual aids. But it doesn’t suffer much from their absence.

My Jewish Year also examines the cultural traditions of Jewish holidays, including holiday-centered food, rites, behaviors, rituals, and duties. For 3,000 years, Jews have documented how and why they observe certain holidays. Thousands of enlightened rabbis have produced tens of thousands of pages of useful commentary. There’s obviously a lot to learn. Pogrebin provides a focus on what each holiday is supposed to mean for every type of contemporary Jew.

Here we find a wide range of clergy, historians, professors, and reference material, delivering a deeply personal, yet comprehensive explanation of how and why Jews relate to each other and to the world. The book produces insight for the Ultra-Orthodox Jew, the Humanistic Jew, and everyone in between, as well as for the gentile or atheist. Whether you’re just slightly curious about the meaning underlying Jewish holidays, or you seek a vast and deep repository of knowledge, My Jewish Year will be of significant value.