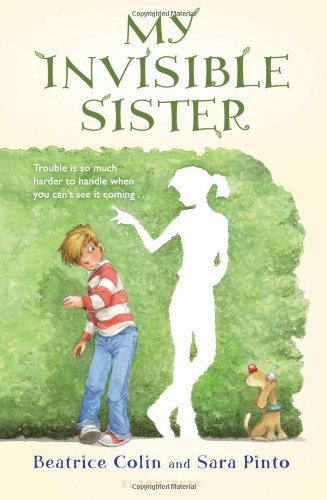 Frank is tired of moving. After living in eight different places in the ten years of his short life, Frank wants to live someplace where he can make lasting friends and stay for a long time. When he moves to 44 Morningvale Circle with his parents, his 13-year-old sister, Elizabeth, and his dog, Bob, he hopes they can live there forever. Their new house has a big two-car garage where he can store all his things, and the backyard sports a huge tree where Frank envisions building a great clubhouse.

For some reason, the family never seems to stay in one place for too long, and Frank blames it all on Elizabeth. She has a condition known as “Formus Disappearus,” which means no one can see her. It also means she can easily pull tricks on Frank and get him in trouble, not only with their parents, but with their neighbors and in school, too.

Frank befriends Charlie, the kid next door, and after a rocky start, they become inseparable, making Frank even more determined to make sure they stay put. When he and Elizabeth have an argument, she retaliates by going to each of their neighbors’ houses and knocking on their door. Only thing, no one can see her, so Frank has to frantically up with an excuse for the knocking. He does not want his new neighbors to run them out of there, so he makes a point of befriending them.

It’s not easy having a sister that no one can see—as well as one who constantly causes problems.

As Frank and Charlie happily build their clubhouse, Elizabeth is miserable and looks for ways to make both boys unhappy, too. Can Frank and Charlie put their heads together to come up with a solution to prevent Frank’s spoiled and snarky sister from causing them to move again? Will Elizabeth ever be happy or feel like a “real” kid?

Though this whimsical tale is a bit farfetched, it is a read elementary-school–age children will enjoy. Even if there is no such disorder as invisibility, the pranks she pulls are somewhat humorous and add a bit of fantasy to My Invisible Sister.