My Grandfather Would Have Shot Me: A Black Woman Discovers Her Family's Nazi Past 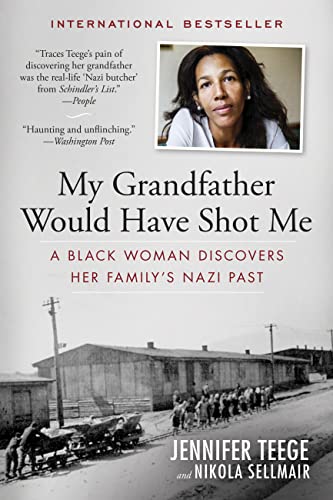 “What is family? Is it something we inherit, or is it something that we build? The book was the key to everything, the key to my life. It revealed my family secret, but the truth that lay before me was terrifying. I went to Kraków to get closer to the overwhelming figure of Amon Goeth, to understand why he destroyed my family. I didn’t have the courage to admit who I was to a Jewish tourist I happened to meet. I couldn’t even tell my friends in Israel who I really was.”

More than 60 years after the end of the Holocaust, Jennifer Teege selects a book from a shelf at her local library in Germany. In an instant, her life changes permanently. Recognizing names and pictures of her mother and grandmother, she realizes that her maternal grandfather is the vicious Nazi war criminal Amon Goethe, made famous as the brutal SS commandant in Schindler’s List. Teege, whose mother is German and her father Nigerian, enters an emotional chamber of horrors.

Amon Goeth is among the vilest perpetrators of the Holocaust. In this book, Jennifer Teege gives readers an opportunity to revisit that dark history and its consequences through the eyes—and with the curiosity of—his granddaughter. Because of this knowledge, Teege’s mental health and emotional security deteriorates rapidly.

The book opens old wounds with Teege. She recalls the sadness of living as a black child in a German orphanage and hoping that some family might find her worthy of adoption. This harrowing experience is more deeply explored as Teege continues to research and comprehend who her grandfather was. It reminds her that her mother gave her away and that she could not have a “normal” life as a small child. The trauma ran too deep.

Jennifer realizes that her mother has kept many dark secrets from her. With uncertain steps over the next two years, Jennifer reconnects hesitantly with her mother, Monika, who placed her into the orphanage. The foster parents who love her never realized the true identity of the little girl they took home.

This memoir offers readers some insight into the Nazi concentration camp at Płaszów run by a ruthless SS officer made famous by his mass murders. At the same time, it reveals the depth of depression that Teege was cast into after becoming aware of this knowledge. She soon fathoms that she has entered a chamber of horrors.

Teege states: “Slowly I begin to grasp that the Amon Goeth in the film Shindler’s List is not a fictional character, but a person who actually existed in flesh and blood. A man who killed people by the dozens and, what is more, who enjoyed it. My grandfather. I am the granddaughter of a mass murderer.”

Recognizing that her grandfather was the man who enjoyed killing Jews in cold blood sent Teege into an agonizing depression. The realization that she has many of Goeth’s physical features petrifies her as she questions whether she might resemble the mass murderer in some other way.

Teege learns that her grandmother once lived in luxury thanks to her relationship with Amon Goeth. She was served by Jewish slaves who were assaulted mercilessly inside the villa. Her grandmother must have understood what was happening to the Jews held captive in forced labor at Kraków and Płaszów and who were indiscriminately murdered by Goeth. She must certainly have witnessed Goeth shooting Jews for the fun of it. Yet she apparently did nothing to prevent it, or to escape from it.

Although Teege is raised in an orphanage and later adopted, she has contact as a child with her mother and grandmother. Neither of them reveal anything about her grandfather, the “Butcher of Płaszów.” As a black woman at age 38, Teege comprehends that if her grandfather could meet her now, he would murder her as well.

Jennifer returns to Israel, where the thought of telling her Israeli friends who she really is becomes terrifying. This knowledge sends Teege into a severe depression from which escape seems impossible. In a desperate attempt to resolve her despair, Teege begins a quest to revisit the locations of her grandfather’s crimes and then to return again to Israel.

Jennifer travels to the Płaszów concentration camp and the former Jewish ghetto in Kraków. There, she tours the decrepit ghetto where Amon Goeth “cleared out the Jews” by murdering hundreds of them over 24 terrifying hours.

She walks upon the grounds of the Nazi concentration camp where her grandfather brutalized and murdered innocent Jews for amusement.

She tours the villa where her grandmother and Goeth lived in luxury. This is where Oskar Schindler pays Goeth untold riches to rescue his list of Jews, saving them from certain death.

The alternating narrative between Teege and co-author Sellmair offers a refreshing and ultimately impartial analysis. Teege’s heartfelt commentary and Sellmair’s objective narrative produce a layer of balanced interpretation and insight. Here we find Teege seeking to understand her grandfather’s horrific crimes against humanity while pursuing her own private absolution. And we absorb Sellmair’s impartial interviews with key figures.

Like most books about the Holocaust, My Grandfather Would Have Shot Me leaves the reader with many unanswered questions. It offers a glimpse of the depth of depravity and brutality that Nazis inflicted upon innocent people.

Yet the reader is left wondering how millions of Europeans (not just Germans) were pleased or at least indifferent to see their Jewish neighbors disappear and/or die. We are reminded that racism and intolerance continues to exist today.

The authors confront us with the certainty that people can change—that tolerance is worth striving for and achieving. Teege eventually travels to Kraków and Płaszów to speak to a group of Israeli students about her experiences. Through that catharsis, she tells us that, “There is no Nazi gene. We can decide for ourselves who and what we want to be.”