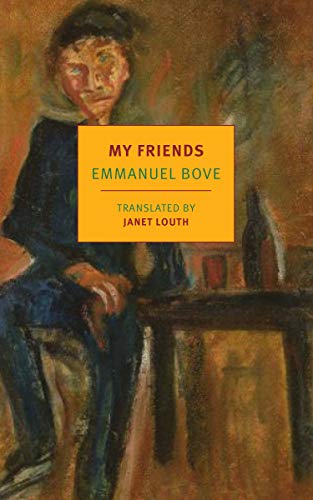 In the dazzling 1915 novella, The Metamorphosis, Kafka’s anti-hero Gregor Samsa wakes one morning and finds himself turned into an insect—as punishment for incest, some critics have suggested.

In My Friends, first published in French in 1924—and newly translated into English by Janet Louth—Emmanuel Bove’s anti-hero, Victor Baton seems to have been born to be a louse. A wounded veteran of World War I, he’s an outsider, a misfit, and a sketchy character that the reader loves to hate, or at least loves to loathe. He’s definitely loathe-able, though the characters he meets can’t resist adopting him and trying to fix him.

Emmanuel Bove, the author of My Friends and other works, was born Emmanuel Bobovnikoff in 1898, when France was still an imperial power. He died in 1945, when the French colonial empire was largely shattered, and as the existentialism of Albert Camus and Jean-Paul Sartre emerged from the shadows of World War II.

Had Bove lived beyond 1945, he might have become as famous as the European intellectuals who stormed European and American intellectual life in the late 1940s and early 1950s.

A near contemporary of Kafka, Bove wrote under pseudonyms as well as under his given name. Over the last 50 years or so, he has largely been forgotten, though republication of My Friends may help revive his reputation.

Janet Louth’s translation has the feel of the original French. It’s also reminiscent of the sound of American noir that one hears in the books of Jim Thompson, the author of The Grifters, and other novels about criminals and the down-and-out.

Whether they’re French or American, noir characters often follow a spiral that descends slowly until they hit rock bottom. Victor begins at the bottom and neither rises nor falls. At the end of the tale he’s in the same place where he started, though he’s able to look back at his journey and reflect on it.

Members of the Facebook generation will appreciate the ironic title of the novel. Baton has no real friends, merely a series of acquaintances—including maids, prostitutes, and an industrialist—he meets in bars, restaurants and on the streets of Paris, at sometime after World War I.

Bove provides no exact date for his story, though the narrator and main character, Victor Baton, says of the proprietor of a café who has a glass eye, “He would like the war to be forgotten. He is sorry it is no longer 1910.”

Victor himself shares that sentiment.

A series of seven linked vignettes, My Friends follows Baton as he drifts from apartment to apartment, street to street and bed to bed, where he has casual sex. Indeed, his life is made-up of one-night stands, none of them satisfying in any sense of the word.

Victor sees himself, perhaps accurately, as a victim of circumstances. At the same time, he doesn’t see that he’s the author of his own fate, and that he has arrived at his lowly position in Parisian society because he has chosen it every step of the way.

Victor tells his story in his own words. His sentences, made up mostly of nouns and verbs, are short and to the point. They don’t have many adjectives and adverbs.

An untrustworthy narrator, Victor invites the reader to hunt for meaning between the lines, write in the margins and piece together the invisible strains in his biography from the visible clues that he provides about himself.

Victor wants to befriend Lucie, Henri, Neveu, Blanche, and Lacaze. Or so he insists. But nearly everything he does—whether it’s a slight gesture or a decisive act—leads him to sabotage his potential friendships.

He might be lying to himself and in denial. He also could be telling himself stories to pass the time of day and prevent himself from catching a serious case of ennui.

Bove describes his appearance, his clothes and the few items he possesses, including his precious wallet, which never contains much money. When it does have money, it’s from the pension he receives from the government, as a war veteran.

Victor offers a brilliant description of the Gare de Lyon, which he visits because railroad stations “disclose the private life of rich people.”

He loathes the working poor and the unemployed and reveres the wealthy. He’d like to be a member of the French bourgeoisie.

On one of his many journeys he encounters a beautiful young woman, then stalks her and terrifies her. Not surprisingly, she runs off. Victor doesn’t seem to know what’s appropriate and what’s inappropriate behavior. But perhaps he does know and simply breaks the rules of deportment.

When he has really lost it, he says, “I was the madman everyone wanted to be.” He’s definitely mad, though no one wants to share his madness.

Darwin would conclude that he was unfit to survive. Freud might call him delusional, neurotic, and narcissistic. Marx would say he as a “lumpenproletarian” and would never revolt. Sartre would suggest that he was a zero who lived on the edge of a world of nothingness.

At the very end of his narrative—which offers a group portrait of Parisians and a stark picture of the city itself—Victor calls solitude, “a sad and beautiful thing.” He adds, “How beautiful when we chose it! How sad when it is forced upon us year after year!”

Fortunately, his tale is short. For 150 pages he’s bearable and sometimes even entertaining and endearing. For much longer than that, he’d be a bore and a drag.