At My French Table 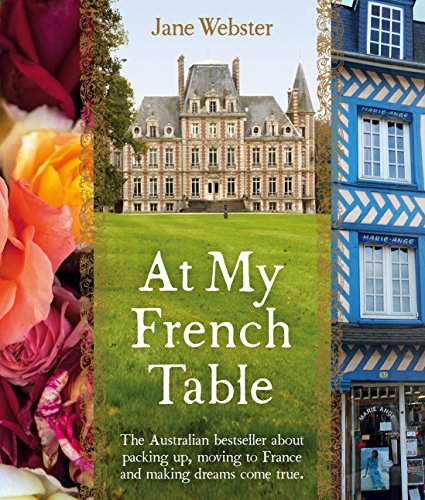 If as a child you loved fairy tales and dreamt of being Cinderella, or if you yearned to be the handsome prince with a turreted castle, you’re going to adore Jane Webster’s gloriously illustrated At My French Table: Food, Family and Joie de Vivre in a Corner of Normandy. The book imparts the warm feeling you get snuggling up in bed with a magical story and a steaming cup of sweet cocoa.

Along with Anne Willan’s From My Chateau Kitchen (Clarkson Potter, 2000), Susan Hermann Loomis’s On Rue Tatin (Broadway Books, 2001), and Amanda Hesser’s The Cook and the Gardener (W.W. Norton, 1999), Jane Webster’s At My French Table provides intimate glimpses of French life through the eyes of an expatriate brave enough to follow dreams that so often are never more than wistful yearnings.

Previously published in Australia in 2008, and more a memoir of a dream made real than a cookbook per se, At My French Table recounts Australian native Jane Webster’s move with her four children and husband Pete from Melbourne, Australia to Bosgouet, a Norman village 10 minutes from Rouen, France. As Webster so succinctly put it, “On Easter Sunday in 2004, during one of those walks, it hit me: I don’t want to wake up when I’m seventy-five and wish we had done this.”

Ms. Webster describes how she and Pete fell in love with everything French on their Paris honeymoon. When they returned to Melbourne, she signed up for cooking classes at the French Kitchen and the Lake House. So smitten by cooking that she eventually quit her day job as an elementary school teacher, she opened La Gare, a small café serving French food and pastries.

When her sister married a Belgian and moved to a town on the outskirts of Paris, Ms. Webster says, “I sternly told myself that it was my familial duty to visit them—often.” And Jane and Pete and their children found excuses to visit, so often that Webster began dreaming of chateau life.

But how could that play out?

Reality being another thing altogether, Ms. Webster finally hit on the idea of buying a chateau with the goal of opening a cooking school, but one with a slightly different twist: She would also offer tours of the area’s markets and other foodie sights. She and Pete decided that Normandy offered the most ideal location, being relatively close to both London and Paris.

Soon the hunt was on for a property. What they found was a stunning 19th-century red-brick chateau with 50-acre park, built over a spot where another chateau, dating to the 17th-century, had stood before burning to the ground. The original stables, however, still existed on the estate. Other outbuildings built by Nazi occupiers remained on the property as well. But the commercial kitchen in the basement (really the first floor) clinched the deal for Webster.

Unlike some memoirists who, like terriers after rats in a hole, worry over every small setback, Ms. Webster focuses mostly on the positives of the experience of setting up house in a country where she didn’t speak much of the language. After scrubbing oak parquet floors with a mixture of water and tea leaves, she set to learning to speak French, saying “I had only known enough French to get me through my stays in Paris.”

Written in the relaxed style of a personal letter, At My French Table reveals much about living la vie française without seeming pedantic or pretentious.

Recipe sections filled with traditional seasonal dishes sandwich the six chapters of narrative. Ms. tells of planting and designing her potager, or kitchen garden. She delves into the niceties of French social etiquette and the intricacies of a decent Camembert. Everything from the game of pétanque to Linden tisane comes under her flowing pen. Her teaching skills and her current métier as a tour guide become apparent as she introduces an auction house in Elbeuf and the weekly markets of Normandy, from Bosgouet to Dieppe to Honfleur.

But the greatest splendor of At My French Table lies in the superb full-color photography of Nikole Ramsay. From the cover, with its triptych of street scenes laced with gold and roses to pictures of her family, students and the chateau itself, the visual kaleidoscope never ends. Three smooth ribbon bookmarks, in the colors of the French flag, attest to Webster’s sense of detail and taste.

Not all is perfect in paradise. At the book’s price of $40.00, you might have a few quibbles with At My French Table, namely the relatively few recipes and the annoying lack of captions on many of the pictures.

From the very first words, “Pourqoui? Why?” this soul-soothing book is impossible to put down, such a visual and verbal feast it is. Be prepared to spend a lazy Saturday afternoon reading, and dreaming, followed by a busy Sunday cooking some of the 40 recipes in your kitchen.