My Fair Lazy: One Reality Television Addict's Attempt to Discover If Not Being A Dumb Ass Is the New Black, or, a Culture-Up Manifesto 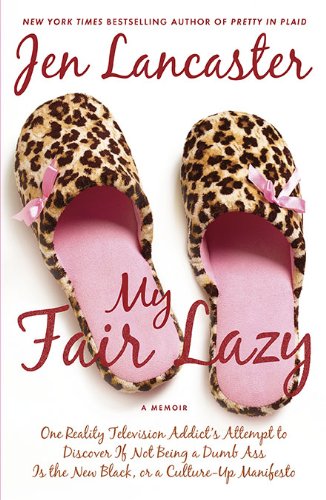 After Ms. Lancaster interviews with Candace Bushnell, author of Sex and the City, and becomes embarrassed by not knowing who Baudelaire is, she decides to embark on a new phase in her life, determined to become more cultured.

Calling this phase her “Jenaissance,” she often compares herself to Eliza Doolittle from My Fair Lady, thus her spoof on the title. When she realizes she has spent far too much time watching reality TV and consuming greasy, fast-food hamburgers, Jen decides to expand her sophistication by educating herself through dining on ethnic cuisines and patronizing museums and the theater to gain insight into the arts.

Written as a memoir, the book demonstrates the author’s wit by drawing the reader in as though she is talking to a close friend. Her eloquent prose commences with hysterical description of her tiny rat- and mold-infested apartment, from which she and hubby, Fletch, move partway through the completion of book.

She also pens much about her menagerie of pets, including her “stinky” pitbull, Maisy; her German shepherd, Loki; and her four cats—one of which passes away during the writing of this tale—and her adoption of three feral kittens from a friend, the disclosure of their antics providing much cause for laughter.

Prior to embarking on her month-long book tour, she endures an extensive makeover. Her experience with torturous hair extensions and Botox is enough to make any reader decide never to go that route. Then, when she reinvents herself into a 1980s gal, it can only make one wonder if this transformation is worth the effort, though her presentation of this is comical. Ms. Lancaster depicts herself as being offensive, overbearing, and condescending, making this reader wonder if she is real, or just a persona used to sell books.

There are several humorous anecdotes in this book, but some also cause speculation. The facts that Ms. Lancaster feels the need to change herself and become more “cultured” to fit in with her colleagues is rather heartrending. Add to this her bouts with insomnia—which have her ingesting sleep remedies along with wine—and her proclivity for making a fool of herself on Twitter, and one almost feels sorry for her. Moreover, though she does try to evolve through her intellectual activities, most of her references deal with her obsession with reality TV and old movies, making one consider if she has much of a life outside of the small screen.

Though her writing proves to be amusing and engaging, most of this memoir appears brash and somewhat offensive. Maybe Ms. Lancaster really is what she claims.