My Dear I Wanted to Tell You: A Novel 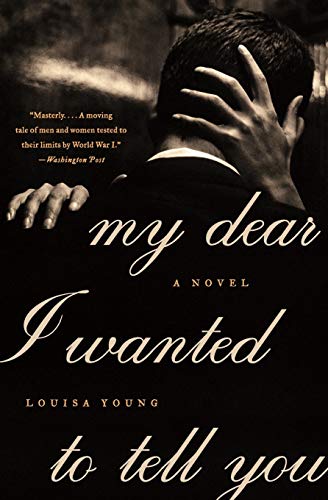 Few literary tropes are as familiar as star-crossed lovers. Hero and Leander. Catherine and Heathcliff. Even the Sharks and the Jets manage to sashay their way through knife fights and amoire, bringing Romeo and Juliet to a modern audience as Shakespeare intended, if the Bard had only envisioned the literary potential of coordinated street dancing.

In My Dear I Wanted to Tell You, author Louisa Young uses this theme as the structural backbone to her novel, which is set against the grisly backdrop of World War I. Her novel follows two star-crossed couples as they attempt to find and define themselves within the crumbling world of Edwardian Britain.

Ms. Young picks up the narrative threads of these two couples and weaves together a complex, yet simple, story of two men who go off to the Great War and leave behind women they love. The two couples—Riley and Nadine juxtaposed with Peter and Julia Locke—function as types on myriad levels.

Early in the novel, Ms. Young situates a young and inquisitive Riley Purefoy as the boy from the wrong side of the tracks who becomes quickly infatuated with Nadine Waveney and her relatively posh, bohemian family. Riley and Nadine study art together as adolescents before Riley joins the Army to prove his worth to himself and to Nadine’s family. The use of aesthetics and artistic presence is an interesting frame for the novel’s themes of beauty and disfigurement amid the backdrop of war.

Peter and Julia Locke are interesting, albeit underdeveloped, foils to Riley and Nadine. Peter and Julia show the reader a world of strict order and gentility, where the aristocratic characters have no means for making sense of the Thomas Hardy-esque maddening crowds that surround them.

The two stories of the two couples intersect about halfway through the novel, when Peter becomes Riley’s commanding officer, Riley and Nadine decide to marry, and Julia is left perpetually waiting for Peter, as she knew him, to return home. Here, the overlap of character personality becomes more apparent than originally anticipated. Throughout this literary milieu, the reader sees the characters responding to the advent of a modern world.

The climatic point in the story centers on Ms. Young’s use of allusion and symbolism of beauty, truth, and aesthetics. Riley is seriously wounded and sent to a plastic surgeon to try and restore part of his face. His physical disfigurement begins to “eat away” at his psyche and soul; he is left feeling that a world capable to this kind of cruelty holds no promise, no betterment for himself or humanity. Julia, worrying about her physical appearance—maintaining her beauty for Peter’s return—actually destroys her face through a disfiguring beauty cream, literally stripping away the part of her that was part of the old British order.

What makes this turn of events so symbolically compelling? Ms. Young is playing with the classic line of John Keats’s Ode, with: “‘Beauty is truth, truth beauty,’—that is all Ye know on earth, and all ye need to know.” The chiasmus of aesthetic ideals of Truth and Beauty (playing off the characters’ training in art) is a way for all of the star-crossed characters to make sense of the ugliness and decay they are fronted with in World War I.

My Dear I Wanted to Tell You picks up several themes through an interesting twist of symbolism. Ms. Young’s characters give the reader a tale of love and heroism. It is a story that ends when “All’s right in the world” and the Edwardian Romeos and Juliets find happy endings of sorts.