My Dad, Yogi: A Memoir of Family and Baseball 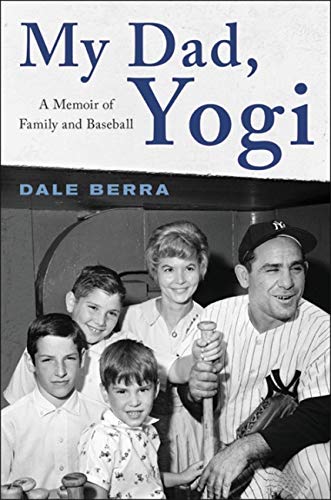 “You all right, kid?” This is the question directed by Yogi Berra throughout his life to his son Dale. In what can only be described as a heartfelt, warm, and moving memoir, My Dad, Yogi is a book that makes the playoffs. The legendary Yogi Berra won ten World Series championships as a player. He won the American League Most Valuable Player award three times. He also gave us enough memorable quotes to create a category known as Yogi-ism. Dale Berra book doesn’t accomplish as much but it has to be considered an excellent tribute to his father and the Berra family.

In My Dad, Yogi Dale Berra writes about family, baseball but also drug addiction, guilt, and career disappointment. This is a memoir filled with considerable honesty and reflection. Berra writes not just about his own life and that of his famous father, but of a time when the idea of family was important to the character of America.

“During his Hall of Fame career, he wasn’t Yogi to me. That was more like a public thing, a brand name, one perfect for him. He’d worn it since he was a kid, meaning that even back then he was a wise man, not a wise guy. Even Mom called him Yogi, but to his sons he was Dad, the guy who came home after Sunday home games and sat at the head of the table, tearing into veal parmigiana. He always had to sit at the head of the table and have both ends of the Italian bread. No one could touch a heel of that bread but Dad.”

Dale Berra let’s his brothers Larry and Tim talk about the Berra family from their own perspectives. He includes their voices in the book. This works well and creates a nice balance to the overall pacing and storytelling aspect of the memoir. Near the end of My Dad, Yogi we are introduced to Whitney Berra, his oldest daughter. It’s her comments that perhaps moves this book onto the list of recommended reading.

My Dad, Yogi is a book about addiction. It’s about how the strength of family is often essential if one is to overcome the illness. It cannot be done alone. Dale Berra shows us how it begins and how it can end. It’s a journey through the 1980s.

“I never used hard drugs up until the early ’80s. As a teenager, I’d sneaked a few beers, like all kids but my drug of choice was baseball. It would always be. But you never know how much circumstances will change you when you get older, especially when you become a key player on a big-league team who’s just at the tip of the iceberg of how good you can be, and you’re suddenly making big money, and you’re only twenty-five.”

When players started using amphetamines (greenies) they began to move beyond beer guzzling. Cocaine was next, and Dale Berra writes about how it was addictive, life-threatening, and illegal. How and why Berra began to use drugs is also a story about the changing urban landscape. When he writes about Montclair, New Jersey, he could be writing about many cities during this time in America.

But Dale Berra writes about his growing use of drugs as if he was carrying a flashlight inside his mind. We don’t trip in the darkness, he illuminates the decisions he made. He let’s us know how he hide his addiction from his family. Berra writes about how he felt he was only an occasional or recreational user.

In the 1980s it wasn’t unusual for ball players to use drugs. Chapter 6 is the key “base” in Berra’s book. It’s here where one might put the game of baseball on trial. It comes after Dale talks about his father and his family. It comes after he writes about what the Berra name means. Since we know his father is Yogi Berra there is sadness and heartbreak that is impossible to bypass. How much grief and disappointment did Dale Berra bring to the ones he loved? Why? Yogi Berra was a man who took pride in his family and his sons. He is the hero in Dale Berra’s memoir. One also cannot overlook the love stories in My Dad, Yogi. In this book primarily about baseball, Carmen Short Berra, (Yogi’s wife for many years) was as legendary as her husband according to her son. How does one fall from grace when surrounded by goodness?

“What I was fooling myself about was the cumulative effect. Cocaine will eat into your brain, your systems, your reactions. All of them will slow down. The insidious thing is that it takes time for that to happen, so you have to look for warning signs. I wasn’t looking. But even though I had kept telling Dad I was all right, I wasn’t. What he didn’t know – because I didn’t know- was that I was sabotaging my career and my life, and dirtying the surname I wore so proudly on my back.”

It must have been difficult for Dale Berra to mention the names of other baseball players on the Pittsburgh Pirates caught in an FBI investigation of cocaine use. Writing a memoir is never easy. Words affect not just individuals but families. They also affect not just the living but the dead, and children to be born in the future.

Yogi Berra died on March 5, 2015. He was able to save his son from drugs not with a Yogi-ism but by being very direct while he was alive. After another public downfall and setback, after another arrest, Yogi Berra said to his son:

“I want to be your dad, but if you keep on doing this, you’re not a Berra anymore. That’s it.”

The fear of forever losing his family was the wakeup call Dale Berra needed. This is why his memoir is about baseball and family, and not just baseball. One can only imagine how Dale Berra felt when his oldest daughter Whitney began to have problems with alcohol and drugs. We are fortunate to learn about his feelings because of My Dad, Yogi. This book should be helpful to other families struggling to keep their family safe, protected and loved. Dale Berra by the end of his memoir appears to be as wise as his father.

“If you don’t know where you are going, you’ll end up someplace else.”

Dale Berra knows where he is going, it simply took time and the direction from his father Yogi Berra to get there. His memoir tells the story that needed to be told.