My Crazy Century: A Memoir 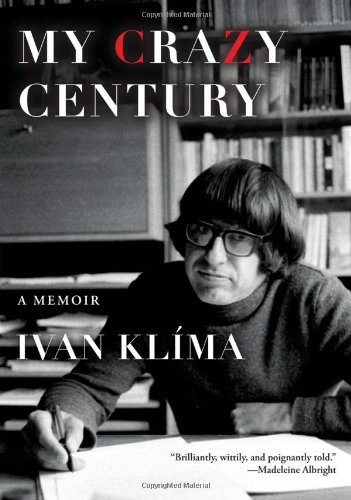 The Czech novelist Ivan Klíma’s experiences under both Nazi and Communist dictatorships provide ample material for his writing.

My Crazy Century is a memoir of his life from earliest childhood to becoming a grandparent in the seventies and the eventual collapse of the Communist regime in Czechoslovakia. Beyond the merely autobiographical, Mr. Klíma includes a series of supplementary essays in My Crazy Century.

This is an innovative approach since his essays are more intellectually wide-ranging than a memoirist's recollections. Mr. Klíma's essays combine humor, anger, and serious topics such as an examination of the instances of intellectuals selling out to the allure of totalitarian movements or the parallels between ideological fanatics and religious fanatics.

Although not raised Reviewer: Karl Wolff

in a religiously observant household, Mr. Klíma becomes acutely aware of his Jewishness when his family is forcefully resettled in the Terezín ghetto. Once the Second World War ends his family is freed, but he soon discovers upon re-entry into the school system that he is woefully behind.

The Red Army is seen as a force for liberation as the Nazi war machine crumbles, but the afterglow of liberation soon begins an to fade as the Communist Party tightens its grip on Czechoslovakia.

At an early age, he joins the Communist Party and gets an assignment writing news stories for the local Communist Party disseminator of propaganda. He relates how he joins a work brigade and spends a summer in an undeveloped region of the country. He witnesses other brigade members in bouts of drunkenness, resentment, and sexual licentiousness. When he tells his superior of what he uncovers, he gets chided for his negativity and is ordered to write how the brigade is fulfilling its quota by 200%.

Beneath the facade of proletarian liberation, he finds corruption, institutional dishonesty, and classist favoritism. Under Nazi rule, one's place in the hierarchy involved the proper racial background. Under Communist rule, one's class background becomes the metric for placement.

Years later, Mr. Klíma's daughter would get rejected from admission in the state university because she lacks the proper class background. Despite propaganda about equality, the Communist Party espouses a kind of vulgar reverse snobbishness.

He again witnesses the might of the Red Army when he sees Prague Spring from a Michigan TV set. After getting invited to teach at Ann Arbor, he has the challenge of finding appropriate figures from Czech literature who aren’t Party-approved hacks and second-rate writers.

This memoir is a vital resource to anyone interested in the literature of Eastern Europe during the Cold War. It is also vital for those who want to know more about Czech literature since Mr. Klíma lends his opinion on everyone from Karel Čapek (author of R.U.R.) to Václav Havel (his personal friend and later Czech President).

Some of the funniest moments come at times of severe personal distress. Mr. Klíma witnesses his father's desperate attempts to have his Communist Party membership re-instated. At this point, Mr. Klíma has been so disillusioned by the Party, especially in its intellectual dishonest reason for imprisoning his father, that the scene seems tragic. Why would anyone want to gain re-entry into a political party that led to imprisonment and personal disgrace?

Later on, Mr. Klíma is interrogated several times by the security apparatus. His refusal to incriminate himself and his mental adeptness put the interrogators in a bind. Luckily these incidents occur after Prague Spring.

While the Red Army clamps down on the protests, the Communist Party, as the embodiment of the people's will, loses any and all legitimacy. The Communist Party comes out against Western imperialism and the corruption of capitalism, yet lords over an impoverished nation and subjects the satellite states (Hungary, Czechoslovakia, and Poland) to brutal imperialist policy orchestrated from Russian Communists. In his essays, Mr. Klíma is particularly lacerating at Soviet hypocrisy.

My Crazy Century is a wonderful introduction to Czech literature and the comic genius of Ivan Klíma. It is a personal indictment of the empty rhetoric employed by both Nazi and Communist ideologies. The memoir also exposes the danger that artists and intellectuals have if not properly inoculated against the allure of promises that totalitarian regimes sell. The memoir is funny, bitter, hopeful, and raging.