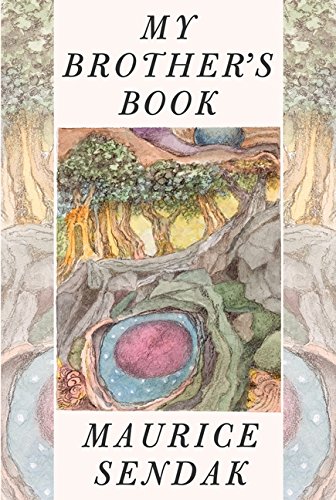 “The author has reclaimed love and loveliness from an eternal winter—if only in a lyrical dream.”

Forged by a wild melancholy, My Brother’s Book represents Maurice Sendak’s mythic journey from this grievous world to a timeless land where loved ones are reunited.

The last book completed before his death on May 8, 2012, revels in small, rapturous watercolor paintings that illuminate the author’s startling symbolic language reminiscent of old hymns, fairy tales, and nursery rhymes. With such tools, sharpened by a lifetime of creative work, Mr. Sendak claims territory that is universal but very much his own.

He takes us back to the very beginning, as a “blazing light!” splits the earth asunder and separates two brothers. The taut, haunting lines, akin to those of William Blake’s “Songs of Innocence and of Experience,” go forth in an exploration of the dichotomy of a universe encompassing both beauty and cruelty, fire and ice, eternity and temporal life, a living brother and one deceased. His small paintings, too, alive with billowing clouds, shafts of light, sinuous trees, and muscular loins, hearken back to images by the revolutionary British poet and artist.

Known for his humorous but fearless imagery, Mr. Sendak points readers to the nose—yes, nose—of his brother Jack. He highlights “a snow image stuck fast in water like stone.” As in his groundbreaking We Are All in the Dumps with Jack and Guy, which featured homeless children, Mr. Sendak gives a prominent role to Jack.

Jack Sendak, who died in 1995, wrote six children’s books, two of which were illustrated by Maurice. In his last years, Maurice Sendak often grieved for his lost loved ones, especially Jack, whom he called his “savior” and a crucial influence on his emergence as an artist.

In the 2012 interview with British journalist Emma Brockes for The Believer, Mr. Sendak traced his love of noses to the early years when he and Jack shared a bed. They had bed bugs, he said. “And to protect me, my brother said, ‘Lie on top of me.’ And I said, ‘I’ll fall.’ And he said, ‘No, you won’t, not if you clamp your teeth on my nose.’ I didn’t fall to the left, I didn’t fall to the right. The bed bugs didn’t get me. They got him. Maybe that’s where the love of noses began.”

While Jack and his nose freeze, Guy (representing Maurice) drops down “on soft Bohemia,” one of the two settings of Shakespeare’s The Winter’s Tale. A mammoth polar bear threatens to devour the boy, but Guy persuades the bear to play a game with him: “Answer my riddle and I will give you my life!” Many readers will find the opening couplet of Guy’s winter riddle familiar: “In February it will be/ My snowghost's anniversary.”

Those lines parrot the lyrics of one of Maurice Sendak’s lighthearted Chicken Soup with Rice poems: “In February it will be/ my snowman’s anniversary/ with cake for him and soup for me!/ Happy once, happy twice/ Happy chicken soup with rice!”. Fifty-one years after the tiny book’s publication, the writer has transformed the bouncy rhyme into an eerie expression of mourning for his dead brother.

Craftily avoiding the bear’s murderous appetite, Guy finds himself “Diving through time so vast—sweeping past paradise!” and then sinking upon blossoms and finding “Jack’s nose and rooted toes/ Deep-buried in veiled blossoms/ And he bit that nose—to be sure.”

In Mr. Sendak’s final surreal painting, the entwined brothers lie beneath spring’s bright tendrils and sunbeams. The author has reclaimed love and loveliness from an eternal winter—if only in a lyrical dream.
This last, strange poem of Mr. Sendak’s will likely puzzle young readers, but fans of the author must seek out My Brother’s Book, as it could have been created by only one man in the company of his own literary heroes.