My Bad: A Mile High Noir 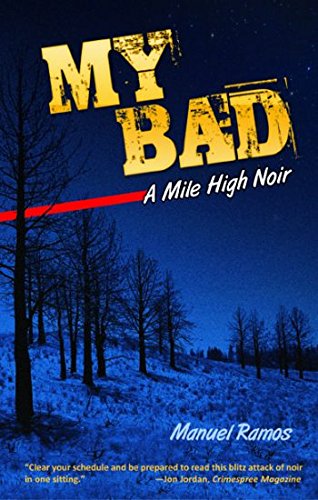 My Bad is Manuel Ramos’ fun follow-up to Desperado from 2013, which won the Colorado Book Award for best mystery. In between, Ramos published The Skull of Pancho Villa and Other Stories, named a finalist for the same award in the short story category two years later.

Both Desperado and now My Bad are dubbed “A Mile High Noir.” But there are 245 days on sunshine, on average, in the Mile High City of Denver so both books beg the question, just how noir can a “Mile High Noir” be?

If you know Ramos’ work, the answer is: plenty.

In My Bad, Ramos brings back a lawyer from his early books, Luis Montez, and a character from Desperado, a guy named Gus Corral who is now an ex-con. (Corral was also featured in The Skull of Pancho Villa.)

My Bad flips back and forth between Gus and Luis’ first-person accounts, but every chapter starts with a verbal lick from a classic blues or rock song. (The book includes a handy “Soundtrack” at the end listing the sources, from Los Lobos to Muddy Waters to Ramón Ayala). The brisk lead-in song quotes are a lot of fun—“Well baby I can never be satisfied / and I just can’t keep from cryin’” or “Don’t start me talking / I’ll tell everything I know.” My Bad is fast on its feet to begin with. The quotes add a bright note to the occasionally grim business at hand.

Ramos starts us out with Gus, and lays down the moral stakes from the first paragraph: “I stepped away from prison trying to convince myself that I was on the way to a new and better life. My mind had turned to mush but my body was hard. The pen will do that. I told anyone who asked that I was okay, considering. And I had every intention of doing the right thing.”

Luis is getting ready to retire from the “lawyer racket” but takes on Gus because he’s from a good family and that counts for something. Luis can afford to be picky about his clients. It’s been 40 years since he left law school, and now he’s winding down. He’s still keenly interested in “professionalism, competence, quality” and wants to quit, at some point, when he’s ahead. There’s a wistful, melancholy tone to Luis’ chapters that are unmistakable.

Immediately, two cases surface. One is brought by a friend of Gus’s named Jackie O., the former Javier Ortega who has changed his name and sex, for starters. Jackie O wears bright orange lipstick, orange capri pants, and white stilletos. She is blowing the whistle on a former employer, a tech support company called Dyanmic-Tec with nefarious business practices. That is, scams.

The other case comes from a new client named Maria Contreras, whose husband was killed a few years earlier following a pirate attack on a fishing boat—not a drug or money-running boat—off the southern Baja coast.

Luis remembers Sam well. “He could make you run out of his bar simply by looking at you at closing time, especially if you were drunk.”

For Maria, a “money problem” has reared its head. Maria is getting letters out of the blue from a man she doesn’t know who claimed he was in business with her husband and believes he is owed some money but can’t get to it. There’s some sort of fuzzy “import business” in the background.

In starting to investigate the case for Luis, Gus sees some things he shouldn’t see—a house on fire, a dead body—and he is in no position, given his ex-con status and a no-funny-business parole officer, to call in the cops. Gus’ decision-making skills make Luis question whether he’s made the right choice of charity cases to take on.

Ramos captures the fast-changing landscape on the west and north sides of Denver, largely due to gentrification, and brings Gus down to an overlooked neighborhood. “Westwood was one of the few remaining neighborhoods in the Denver city limits where the word ‘barrio’ still fit. Working families who’d been residents for decades, damaged but proud houses and small shops that dealt in everything from motorcycle repairs to marijuana cookies, all mixed together in a crooked rectangle bordered by Alameda, Mississippi, Federal and Sheridan. Tattoo artists collected books for neighborhood kids, Mexican taquerias sprung up and died like mushrooms, while the public art of Chicano artist Carlos Frésquez welcomed visitors to the community at Morrison Road, the diagonal street that cut through the heart of Westwood.”

The plot thickens like a slow-simmering pot of pozole. There’s a growing dread like those heart-pounding episodes in Breaking Bad when Tuco Salamanca’s cousins were headed north to hunt down Walter White and avenge Tuco’s death.

The contrast in characters is vivid. Gus is eager to do the right thing, to shed his old skin as troublemaker, a banger. Luis knows the end of his career is coming, but doesn’t know what’s next. He’s looking ahead, a bit anxiously, and taking in the fast-changing city with a touch of nostalgia.

For all the Denver trappings that Ramos sketches so well, My Bad leads the players to some dicey moments on a frozen winter lake. The characters are suddenly not only fish out of water, they are frozen fish way out of their element. The scenes in Summit County are a treat. The producers of the recent re-tooled television version of Fargo would have plenty to work with in the entire book, but especially as this bunch tries to put themselves over as ice-fishing pros.

The ending of My Bad, back down in Denver, delivers a sweet twist. Can a Mile High Noir finish on the upbeat side? Don’t forget, the sun shines more often than not.