My American Dream: A Life of Love, Family, and Food 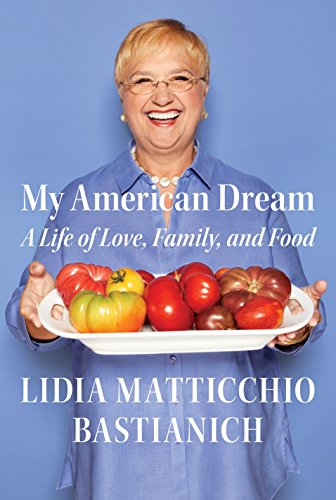 When Julia Child and James Beard first ate at the acclaimed Manhattan restaurant, Felidia, eight months after its opening in 1981, a star-struck Chef Lidia Bastianich came to their table to introduce herself and enquire about their meal. They had sampled many dishes that night, but what Julia Child was most eager to talk about was the wild mushroom risotto. Think about it. In 2018 to we cooks (and diners) mushroom risotto is old hat, but in 1981 it was a novelty.

Risotto is a Northern Italian dish and back in the 1980s Northern Italian restaurants were having a moment after years of red sauce Italian-American fare. As it turns out, Lidia Bastianich was born in Istria, originally a part of Northern Italy, that came under the control of communist Yugoslavia. She learned to make risotto (and many other authentic dishes) from her grandmother. She and her husband, Felice, opened Felidia at just the moment when diners were open to a different kind of Italian cuisine.

Julia Child couldn’t get the mushroom risotto out of her head. Several years later she came to dine at the home of the Bastianichs and specifically requested a lesson in how to make mushroom risotto. Then, in 1993, Julia Child asked Lidia Bastianich to appear as a guest chef on her PBS series, Master Chefs to make—what else—mushroom risotto. The episode was nominated for an Emmy Award in 1994 and undoubtedly launched Lidia’s own Public Television series, Lidia’s Italian Table which began airing four years later.

The story of Julia Child and the mushroom risotto that made Lidia Bastianich a staple on public television is just one of the many stories you’ll find in My American Dream, a heartwarming memoir that fills in the gaps of what we think we know about America’s favorite Italian cook, known affectionately by her fans as simply, “Lidia.”

At its core, though, My American Dream is the American immigrant story—the one that is told over and over again about the hardships and sacrifices made by one generation for the betterment of the next. More than half the book is devoted to the telling of her family’s story from her early childhood in Tito’s Yugoslavia, to the two years she and her family spent in a refugee camp in Trieste, Italy, and then as newly arrived immigrants in New York thanks to the help of Catholic Charities.

Her parents made enormous sacrifices at great emotional cost so that she and her brother, Franco, could have a better life in America. Whether by design or coincidence, it is impossible to read My American Dream without seeing it through the lens of our current political climate. Would the Matticchio family even be allowed in today?

Written in a straightforward, linear narrative, My American Dream is—like her cooking—accessible. Yes, there are a few transitions that are clunky or awkward, and descriptions about her family life are superficial at best, leaving the reader with more questions than answers. Still, the book conveys her enormous sense of gratitude to her parents who risked everything to give her and her brother a better life in America. And in that sense, it is a touching (and timely) read.

Woven throughout the narrative are the threads that made Lidia the acclaimed chef and then cooking teacher we all know and admire. At each stage of her life she has had a strong connection to cooking, whether it was foraging for wild asparagus as a little girl in Istria, spending time in the kitchen with her Nonna Rosa, helping out in the school kitchen when she was a refugee in Trieste, or her first job as a teenager working in a bakery in Queens, Lidia seemed destined for a culinary life.

But not just any culinary life, one that is deeply informed by her Northern Italian roots. After establishing two modest Italian restaurants in Queens, she and her husband, Felice, began to dream of opening a restaurant in Manhattan. “I had a story to tell,” she writes, “and I wanted a forum from which to tell it. I wanted to serve real Italian food. Not American Italian food, but Italian food.”

Which brings us back to the mushroom risotto. Like many of us cooks know, cooking is storytelling. And that is what makes Lidia Bastianich so appealing. One can search through the PBS archives and find the 1993 episode of Julia Child’s Master Chefs filmed at the home of Lidia in Douglaston, New York, in which she teaches us how to make mushroom risotto. It is utterly charming.

There is Lidia, by then in her 40s but looking quite young, a little nervous in front of the camera, but completely self-assured in her homey kitchen. She is not glamorous, she is plump and wearing one of her signature big, flowery blouses. She looks like everyone’s idea of an Italian mother cooking for her family.

As she talks us through the process she gives us some background on risotto and the different mushrooms that go into the dish; we feel as if we are in the kitchen with her. As you watch her, a sense of I can do this, washes over you, and you come to understand that mushroom risotto will become a part of your story as well.

In her memoir, Lidia describes that first encounter with Julia Child at her restaurant, Felidia: “I was immediately disarmed by Julia’s warmth and modesty. She spoke with the same warbled voice I had heard on television, but she was without airs. There was no pretense with Julia. She was direct, open, and extremely curious.” Reading that description, she could have been describing herself.

In 2017 Lidia Bastianich turned 70. Her mother (known as Grandma to TV viewers) was 97. She decided to write her memoir out of a deep sense of gratitude for the life her parents gave her and as a way to pass down her story to her grandchildren. In the end though, it is we, her devoted fans, who are grateful to her for sharing her cooking with us. We may never have learned how to make mushroom risotto without her. Her story is now a part of ours, which is just as she intended. America is indeed a melting pot.