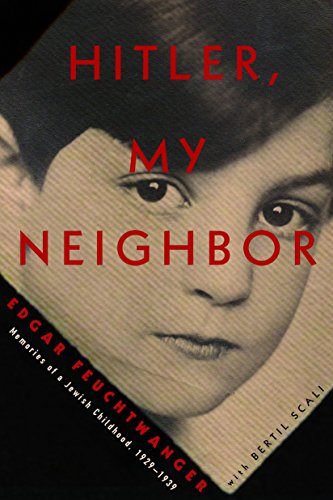 “You can’t walk along the sidewalk in front of Hitler’s house now because there are barriers—and behind them soldiers standing to attention, watching the Mercedes cars in the street. I recognize the guards because I pass them every day, but they don’t notice me, an invisible little Jewish boy. I have been walking past this building all my life and I watch them closely. I imagine what it must be like being Hitler. I wonder what he eats for breakfast. I see his shadow pass behind a window frame. He hates us. He hates me. Without even knowing I exist.”

In 1924, Edgar Feuchtwanger was born to Jewish parents in Munich, Germany. During his first five years, Edgar plays with toys, listens to his mother playing piano, and eavesdrops on adult conversations between his editor father and his famous uncle, author Lion Feuchtwanger.

Across the street, a new neighbor with a little black mustache moves in and keeps to himself. For the next ten years, Edgar chronicles his life as a young Jewish boy in Nazi Germany, living next door to Adolf Hitler. Through these years, Edgar watches the famous Hitler from his home as the world around him crumbles.

At age 91 today, Edgar might be the only German Jew alive who grew up within an arm’s reach of Hitler. As history strutted patiently past Edgar’s windows, he and his family grew ever more frightened. The danger of being a Jew in Nazi Germany is not to be understated. But to live across the street from the Fuhrer himself was astonishing.

Edgar’s father, Ludwig, misread the Nazi menace. Like so many other Jewish heads of family, he assumed that this Nazi menace would soon dissipate. It did not.

In school, Edgar was forced for hours at a time to stand with arm out in the Nazi salute. Painful as it was, Edgar was not terrified. He was not forced to join the Hitler Youth, as his friends had been required to do. But he was forced to copy the swastika many times and to honor the government that increasingly made Jews the most despised people in the nation.

On Kristallnacht, Edgar’s father was arrested and interned at Dachau. Amazingly, the camp administration failed to comprehend that Ludwig’s brother was the famous author, Lion Feuchtwanger, who was hated by Nazis.

In 1939, just before Nazi Germany attacked Poland and WWII began in earnest, Edgar was sent on his own to England, where his family eventually found refuge. There he found a new life, a new career, a wife, and a new family of his own.

Edgar studied at Cambridge University and taught history at the University of Southampton until he retired in 1989. His major works include From Weimar to Hitler, Disraeli and Imperial Germany 1850–1918. In 2003 he received the Order of Merit of the Federal Republic of Germany for promoting Anglo-German relations.

When he was 88, Edgar decided that it was time to recall his childhood and his famous neighbor and to produce a book about those experiences. This book is the result. It is a historian’s view of the Nazi rise to power, but through the eyes of a child, from ages five to fifteen. Edgar went from a pampered five year old in an upper middle class home in Munich to a frightened, disparaged child whose Jewish family barely survived by leaving Germany.

This is a well-written, cogent book about ten years in the life of Edgar Feuchtwanger. By the time he was 15, he fully realized the danger that Nazis brought to Jews in Europe. Edgar writes from the heart and the mind. His recollections are both thorough and extremely well reproduced, making the book read like these important scenes had just occurred and with frightening detail.

Added to the effective manuscript are pages of pictures of Edgar, his family, the neighborhood, and Hitler. This enhances the value of the manuscript for visual learners. Feuchtwanger is an excellent writer. He wisely focuses on the senses, an especially significant technique for authors of childhood experiences. He sees the world through the eyes of a child, yet delivers from the aspect of an adult trained in writing history. The result is an exceptionally powerful and emotionally charged story.