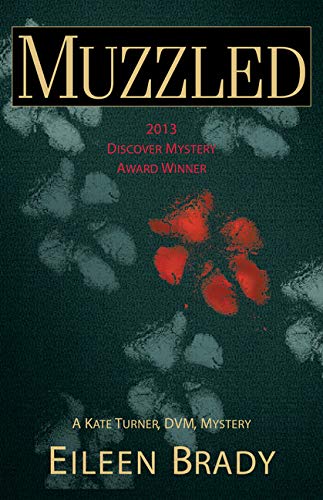 “Muzzled is an enjoyable read for both the mystery fan and the dog lover, and if they are one and the same, it’s a double delight . . .”

Kate Turner, filling in at Oak Falls Veterinary Hospital, is used to the unusual, such as retrieving hamsters from vacuum clean dustbags. When she arrives at the Langthorne resident to check on King Charles Too, a very ill champion King Charles spaniel, she walks into a mystery as the house call turns into a discovery of murder.

“It looked like a horror movie tea party. Vivian slumped in a brocade armchair, her skin bluish white. A large dark stain over her heart . . . Thomas had fallen against the side of his chair . . . An identical stain covered his polo shirt.”

As the police arrive, and Animal Control takes custody of the dogs until next-of-kin is notified, Kate realizes another shocking fact. Charles Too is missing . . . and things go downhill from there.

Between juggling appointments with eccentric pet owners and their equally rambunctious animals, repulsing advances from her ex who doesn’t want to be, and attracting the interest of three of the little town’s most eligible men, Kate finds herself drawn into the investigation. Unfortunately it’s in the wrong way because now there’s a rumor going around that the Langthornes’ deaths weren’t a murder-suicide as originally thought, and Kate herself may have killed them.

‘Only new person around is that lady vet working at Doc Anderson’s place . . .’”

The Langthornes’ daughter claims the dogs, stating Charles Too is among those at the shelter, and has already been sold for the tidy sum of one million dollars. Kate gives the spaniel his final physical and discovers an unsettling fact: Charles Too had a shaved leg from an IV insertion during his illness.

“Only one problem. I had shaved the other leg. This wasn’t Charles Too.”

At a local dog show, friends outside the arena turn to enemies inside it.  When another dog owner is shot and wounded, Kate is soon up to her eyebrows in counterfeit spaniels, the tangled relationships in a small town, and more accusations of murder…all aimed at her.  And the evidence isn’t helping.

“What usual stuff do you carry around, Kate?”

I thought for a moment. “You know, my wallet and credit cards, duct tape, syringes, a bag of fluids, some sterile needles, epinephrine, dexamethasone, Advil, some extra socks. . . .”

“That sounds like the stuff serial killers carry around.”

The investigation is getting nowhere but Kate’s been doing some poking around on her own, and stirring up more questions than answers. She’s starting to wonder if she should just butt out and let the local police take their sweet time in solving the case.

“Should I continue asking questions about the Langthorne deaths? Maybe I should shut up and mind my own business . . . Why did someone switch another dog for Charles Too? What if Thomas didn’t kill Vivian? Maybe someone staged their deaths to look like a murder-suicide?”

And then a little dog is brought in, victim of a hit-and-run.

“The hair on his legs and tail was matted and dirty . . . The shave mark where I’d put the catheter in was growing back nicely. It was Charles Too.”

Since Charles Too is reportedly on his way to Hong King, Kate now amps up her investigation. The suspects start pouring in, among them the Langthorne’s daughter, with a history of stealing money from her parents, a couple of rival dog breeders, and several local renters on whom the Langthornes were foreclosing so they could rent their land to more lucrative businesses.  None are cooperative and most are unashamedly glad the Langthornes are dead.

“‘Fate intervened.’ He broke off another piece of bread. ‘I’m a lucky guy.’”

Abruptly everything falls into place, and Kate finds herself face-to-face with the person responsible for everything, someone she never suspected, the one person she trusted, who is now setting Kate up to be the last victim.

Whether you’re a canine enthusiast or not, the descriptions of dog shows in general and King Charles Spaniels in particular, as well as the eccentricities of many pet owners will keep you entertained. Kate’s dialogues with herself, ostensibly carried on with her patients as she tries to unravel the reasons behind the deaths keep the storyline in a lighter vein in true cozy mystery style.  Though there are little hints here and there for the astute reader, the revealing of the culprit will definitely come as a surprise.

Muzzled is an enjoyable read for both the light mystery fan and the dog lover, and if they are one and the same, it’s a double delight.