The Mutual Admiration Society: How Dorothy L. Sayers and her Oxford Circle Remade the World for Women 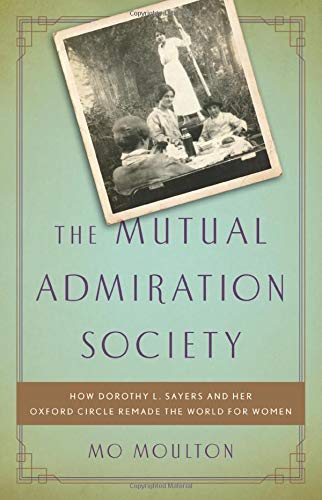 Detective fiction author Dorothy L. Sayers is the best-known figure in this new book by Mo Moulton, who studied at Brown, taught at Harvard, and who now lectures at the University of Birmingham in England. Eight other women, less well known than Sayers, and a couple of men, including Sayers’ husband, Atherton Fleming, known as “Mac,” appear in this group portrait.

Many of the women, including Amphilis Throckmorton Middlemore, have names the likes of which belong to era when London was still the financial capital of the world and Oxford and Cambridge universities were the envy of students from New York and Boston to Chicago and Los Angeles.

The Mutual Admiration Society, abbreviated hundreds of times in these pages as “MAS,” tells the story of a generation of women born in the 1880s and 1890s, who were well-educated, upper class, literary, and academic. If they did, indeed, remake the world of women, as Moulton claims, they did not remake it as profoundly or as dramatically as their overtly political sisters, including Emmeline Pankhurst, who were suffragettes, who were arrested and jailed, and who won the right to vote for British women—not all at once but gradually.

In the copy on the flyleaf of this book, Moulton is refered to as “their” and “they,” as in “they live in England” and “Their previous book was the runner-up for the Royal History Society’s 2015 Whitfield Prize.”

Mouton is the author of a column in the Toast, titled “Watching Downton Abbey with an Historian.” This new book has some of the ambiance of Downton Abbey. It could be transformed into a drama for Masterpiece Theater. After all, it has love, sex, money, intrigue, English settings, and in the background, World War I and World War II.

Sayers isn’t the only colorful figure who belonged to the Mutual Admiration Society. Charis Ursula (Barnett) Frankenburg made a name for herself as a midwife, birth control advocate, and pundit on parenting. Dorothea Ellen Hanbury Rowe, known as D. Rowe, worked as an English teacher and founded the Bournemouth Litle Theater Club.

Moulton says that the motivation to write this book came from a desire to give this group of women its rightful place in the annals of history. The author admires Sayers and Co., though at the end of the book, explains that members of the MAS were “not always comfortable with the results of inequality and class division” and “not dedicated to changing that hierarchy.” That's putting it mildly

MAS members were also sometimes uncomfortable around Jews, blacks, and Catholics, and Sayers could be cavalier about fascism, as when she noted Hitler’s “nasty habit” of bombing Britain. But perhaps that phrase is simply characteristic of British understatement.

Readers might like to know what working class women in the East End of London were doing in this same time period that began just before the start of World War I and that ended with the advent of Margaret Thatcher, who was in some ways a beneficiary of the social changes wrought by the MAS.

Moulton moves deftly from Sayers to D. Rowe, to Frankenburg and the others, and also transports them graceful though the decades, though surely there was a way to be less circumspect about sex and gender. Now and then there are insightful comments are Sayers and Mac, for example, who apparently slept not only in separate beds, but separate rooms. A reader cries out for more.

Despite the limitations and omissions, The Mutual Admiration Society offers valuable information about Sayers’ career as a detective novelist who created the aristocratic sleuth, Lord Peter Wimsey, a whimsical character, indeed, who has pleased legions of TV viewers.

Moulton argues that Wimsey is an “idealized version” of Sayers with “fantasies woven in to make a genuinely fictional character.” Perhaps that’s so.

While The Mutual Admiration Society weighs in a bit too heavily on the pedantic side of storytelling, the details definitely take readers back to a time and place that no longer exists, except in fiction and history.

Viewers of Downton Abbey will enjoy Mouton’s portraits of the young women who first gathered in November 1912 “over cocoa and toasted marshmallows” at Oxford, went their separate ways, and yet maintained their loyalties to one another. With real affection, the author amplifies the message that Sayers herself broadcast: “the friendship of which the female sex is said to be incapable.”

Take that male chauvinist pigs at 10 Downing Street and in the House of Lords. English sisterhood has been, indeed, a powerful force for good.