Mustard: A Treasure from Burgundy 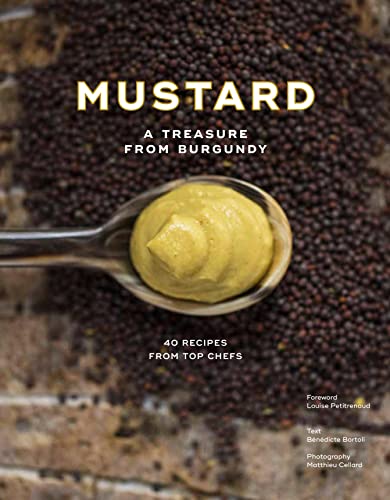 “Students of culinary history will find this a fascinating combination of recipes and historical narrative. Mustard: A Treasure from Burgundy is certainly a must-read for mustard lovers.”

The humble mustard seed has a very unassuming appearance. Yet this tiny seed packs a powerhouse of flavor.

Mustard: A Treasure from Burgundy by Bénédicte Bortoli is a lively celebration of this spice. This coffee table book is also an extended appreciation of Maison Fallot, the famous French mustard company. This company is known for producing pots of tangy mustard, which is the inspiration of countless chefs.

The mustard seed, also known as sénéve or sinapi has a long and revered history in medicine, religion, and cuisines. In fact, evidence suggests that the black mustard seed was used as a foodstuff nearly 5,000 years ago. Archeological evidence also shows the seeds traveled from Central and Western Asia to Europe (via Germany) and by fifth century BCE the Greeks were using ground mustard as an everyday spice. As Romans conquered Europe, they brought with them the tiny condiment and mustard vines were planted throughout mainland Europe, including Burgundy, France, by first century, CE.

The book employs inviting photos and illustrations to explain the history and use of mustard seed. Different oils, vinegars and finally verjus (juice from green grapes) was added to ground mustard to create a mouth-watering condiment. The term mustard (from Latin mustum ardens, meaning “burning must”) was coined sometime in 1233 and soon became part of the common lexicon. The book has a longer and more amusing explanation of the word mustard. The story about Charles VI, King of France, is not historically proven but makes for an interesting read.

Mustard-making was a serious business and in the 13th century, Étienne Boileau, provost of the merchants of Paris, granted Parisian vinegar makers the right to make mustard. Previously, the condiment was prepared exclusively in Dijon, based on a recipe and methods described by Palladius in the fifth century CE.

Mustard soon became the spice of choice and was promoted from accompaniment on the side of the plate to the king of condiments. Mustard seed, unlike other exotic spices, was never traded for money. It also turned out the mustard plant had multiple uses from greens, seeds, oil and flour. This seed with low market value was considered a precious offering in Egyptian sarcophagi.

From medicine to green manure, the mustard plant was used worldwide but the plant has firm roots in France. The Industrial Revolution brought about mass production of this condiment and one company saw the potential in the tiny seed. The House of Fallot was established in the early 19th century and started making mustard with addition of pure Burgundy verjus. The House of Fallot, one of five mustard makers still in operation in the region, has become a household name with its ubiquitous pots of mustard now available in 70 countries.

The first half of the book is a look at the history, botany, and preparation of mustard. It is also full of interesting tidbits like why does mustard go up your nose? That’s because when mustard seeds are ground up with verjus or vinegar it releases molecules that trigger a chemical reaction to produce allyl isothiocyanate (also found in horseradish and wasabi) and this travels up the nasal cavity and tickles or irritates the trigeminal nerve.

The second half of the book consists of recipes from 40 well-known and respected chefs. Each recipe contains this spicy condiment, and it turns out mustard can stand up to scallops, shellfish, ham, aspic jelly, veal, steak, rabbit, mullet, and fish.

The recipes are challenging and home cooks with creative abilities will admire the artful presentations and photographs.

The Chef’s Note at the end of each recipe provides entertaining and informative reading.

Students of culinary history will find this a fascinating combination of recipes and historical narrative. This is certainly a must-read book for mustard lovers.