Must Love Dogs: Who Let the Cats In? (Volume 5) 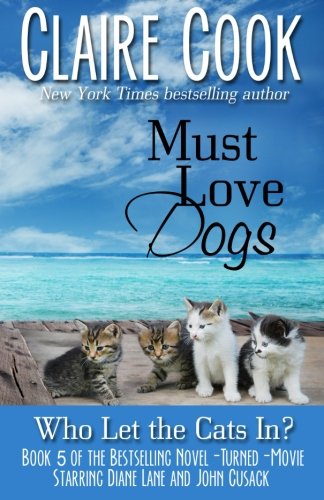 Sarah Hurlihy and boyfriend John Anderson purchase Sarah's childhood home with a massive renovation in store. Billy, Sarah's dad, will get his personal space, which he calls his man cavern.

Meanwhile, Billy enjoys driving the ice cream truck, handing out doggie treats with business cards for the three ladies who run Bark & Roll Forever to promote their dog walking and boarding services. He gets compensated with casseroles for which they are thrilled as Sarah proclaims she is not a cook!

The temperature is getting cooler, and Sarah discovers a mama cat under the front porch where she has given birth to four kittens. Sarah names her Pebbles, due to her markings, and hopes to save all the felines from cold and starvation.

Grabbing a wild animal is not easy, so she devises a plan to lure Pebbles into the house then get her babies. Sarah coerces her trust little by little giving her Fancy Feast and Slim Jims, and every time she feeds her, she puts the food bowl closer to the house, where she can lure her inside and into a carrier. She describes the feat and Pebble's reaction in the hilariously funny text:

“The nanosecond the door slammed shut, Pebbles exploded. Instantaneously and completely, like that exact moment when the flame reaches the end of the fuse on a Fourth of July bottle rocket. She slammed into the windows on the kitchen’s single French door with mind-boggling force. The ancient panes of glass rattled but held on.

“Pebbles spun around and whooshed down the long hallway, a super-feline whirlwind powered by fear. She hit the beveled glass inset in the heavy oak front door and bounced off. I thought she’d crumple to the ground from the impact, but instead she leapt into the living room, climbed the full-length drapes, digging her claws in as the dusty drapes swung back and forth. She perched on the valance, looking around for an escape route . . .

“. . . Pebbles dashed back out to the center hallway. Instead of climbing the stairs, she scaled the family photo gallery as if it were a rock-climbing wall. Picture after picture crashed to the steps, glass splintering, pieces flying everywhere...

“. . . By the time I caught up to her in the family room, she was scaling one of the built-in bookcases, trying to hide herself behind the contents of the shelves. I made it just in time to get one last look at the hand-blown glass vase we’d bought for our mother on her final Mother’s Day. Remembered that we’d filled it with a huge bouquet of purple lilacs we’d cut from the ancient bush right outside the kitchen door, their sugary springtime smell filling the room.

“And then the vase crashed to the floor and splintered into a gazillion pieces.”

Billy arrives witnessing the mess. “Jesus, Mary, and Aloysius . . . Who let the cats in?”

Sarah can't remember her dad being so angry, but when he borrows a friend's "canned ham" trailer and holes up in the back yard, she realizes she'll have to work hard to make amends.

John isn't too happy because Billy snatches his pooch, Horatio, after Sarah asks him to keep him away from the kitties until they are settled. Irritated, John becomes so distressed with the upheaval in the household he grabs Horatio and heads to Florida to visit his folks.

While Sarah deals with the chaos of the new feline family, she worries about the renovations as well as her job. The mom of one of her preschool students is bent on causing her trouble. Sarah doesn't know if she can handle the stress and also wonders if she's lost John.

Book five in this series offers another heartwarming tale of a boisterous, close-knit Irish family. Cook, writing in the first person, has the flair for pulling the reader into the story to feel a part of the happenings. This novel, filled with humor and astute characterization stands alone, yet one would be remiss by not reading the prior installments.

Must Love Dogs has already been a major motion picture, and now New York Times bestselling author Claire Cook’s hilarious and heartwarming series is begging to hit the screen again as a miniseries or a sitcom.