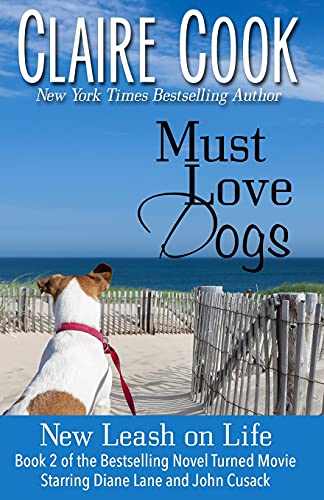 “The closeness of this large Irish Catholic Massachusetts family highlights all the laughter—along with the frustration—that goes with loving, close family bonds. Cook's penchant for humor is evidenced . . . making this a delightful and fun read . . .”

Claire Cook's novel Must Love Dogs released in 2002 was such a huge success that it was made into a hit movie starring Diane Lane and John Cusack. Now Cook is back with a sequel in Must Love Dogs: New Leash on Life, which proves just as delightful.

Sarah Hurlihy is employed as a preschool teacher and when not working deals with her boisterous, close-knit family. Through the coaxing of her siblings and father, she had allowed them to post a personals ad for her to meet men. Now in a six-month relationship with John Anderson, Sarah is content. Then her brother Michael along with his dog Mother Teresa descend on her to stay while his marriage crumbles, putting any thoughts of intimacy or privacy with John on the back burner.

John's condo in Boston, which is some distance from Sarah's home in the coastal village of Marshbury, is where Sarah and he can capture alone time. Only problem is that John's new puppy Horatio dislikes Sarah—dislike being an understatement. John tries everything to get the wily canine and Sarah on good terms, but every occasion they are together proves disastrous.

On summer break from teaching, Sarah is offered a consulting position at John's office, where she is hired to teach social skills to the "geeks" in the business. She meets Keli—with one 'l' and one 'i'—HR employee of the company. Young, vibrant and sexy, Keli befriends Sarah, though her ulterior motive in doing so is questionable.

After many attempts to get her and Horatio to take to each other, Sarah has had enough. She tells John their relationship is over and, despondent and heartbroken, Sarah leaves. Meanwhile, Michael is headed for Savannah where his wife Phoebe is visiting her parents with their two daughters. Phoebe does not return to Boston with the girls when promised, and Michael finds out she plans to stay in Georgia for good. This leads him to panic and attempt to get on the first flight out there.

Sister Carol and their dad jump in to rescue Michael, and soon the four of them head to Georgia. Sarah is so busy lending a hand to her brother that she has no time to think about Michael until she decides to check up on her "geeks" via email only to discover things are changing at work, too.

The closeness of this large Irish Catholic Massachusetts family highlights all the laughter—along with the frustration—that goes with loving, close family bonds. Cook's penchant for humor is evidenced clearly in this sequel, making this a delightful and fun read, and leaving one to wonder if this book will also be made into a heartwarming and comedic movie.