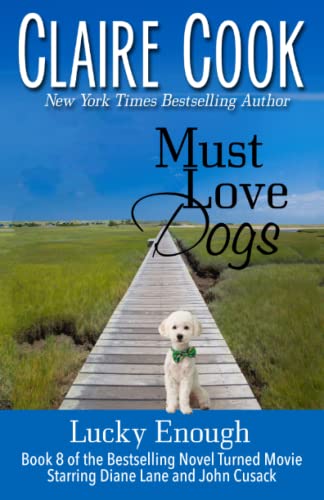 “Be prepared to be welcomed by the loving, lively, and amusing Hurlihy family in Must Love Dogs: Lucky Enough, as with previous novels in this series. Though this stands alone, you will want to read the other seven books . . .”

Claire Cook's novel Must Love Dogs, released in 2002, was made into a major motion movie starring Diane Lane and John Cusack in 2005. Since then, Must Love Dogs has become a bestselling book series. Must Love Dogs: Lucky Enough, book eight, brings us back to Marshbury, Massachusetts, to enjoy the humorous antics and affection within the Hurlihy family. This heartwarming collection is sure to become a much-watched television series.

Sara and John have bought Sarah's childhood home and are in the process of doing renovations. They convert the garage for Sarah's dad, who goes by "Billy Boy," into an apartment he calls his "man cave." They built this hoping to achieve some privacy for themselves. But with this family, privacy is hard to attain.

In addition to remodeling the house, Sarah is busy as a preschool teacher while caring for a mother cat and her four kittens, two dogs, and finding time to be alone with John. There is never a dull moment with pets and people always in attendance, and now since Sarah's brother Johnny has returned home. He is residing in the "canned ham trailer" parked on the driveway. And Polly, Sarah's teaching assistant, hugely pregnant and single, has become their roommate after a hurricane forced her out of her rental. Sarah takes this all in stride, used to always having people around.

Sarah, who loves her family, home, and students, couldn't be happier. The only thing missing in Sarah's life is a child of her own. In a second marriage for both, Sarah is a bit older to start a family. She is considered a "geriatric mom" by her physician, which, of course, doesn't go over well with her. Still, they are determined to do what they can to have a baby, including dealing with embarrassing medical appointments and fertility pills, making Sarah an emotional wreck as she prepares for in-vitro fertilization. It doesn't help that Polly, now an honorary family member, is sporting a belly growing larger every day. Though thrilled for her friend, this causes Sarah some anguish about her situation.

St. Patrick's Day approaches and Marshbury's residents, primarily of Irish descent, lovingly term the area "The Irish Riviera." Well-known for hosting a spectacular parade on the holiday, Billy Boy runs for the title of parade mayor. Family members pitch in to help in his campaign, but things get out of hand when his rival, Sweater McShaggy, constantly puts obstacles in his way—like removing the sign from their front yard and replacing them with his own. Billy Boy doesn't let anything unsettle him, and he retaliates, though not in a mean way.

The boisterous, congenial senior citizen and proud father of six children and several grandchildren, Billy Boy offers many endearing quirks. The Boston dialect is used with terms like "evah," and "thickah," etc., to give the setting more credibility, along with some chuckles. Billy Boy loves using a play on words, as shown in the following:

"He patted me on the back, looked over my shoulder. 'Well, I'll be jiggered and jitterbugged. That's quite the hullabaloo you've got going on in my yard.'"

Things become tense in the household with Polly's upcoming birth, Billy Boy's race for the parade mayor, the neutering of feral felines, and Sarah's anxiety about her fertility treatments. Yet they all band together in a message of love, comfort, and understanding.

As the gloomy winter days pass with the promise of spring, Sarah is praying to receive some good news. Will she be able to conceive? What will happen when Polly has her baby if she can't? Will Polly continue to live with Sarah and John or move to her own place?

Be prepared to be welcomed by the loving, lively, and amusing Hurlihy family in Must Love Dogs: Lucky Enough, as with previous novels in this series. Though this stands alone, you will want to read the other seven books to not miss out on any part of this humorous and devoted group. As it is written in the first person, the reader feels part of the clan. Though they all endure problems, pain, and sorrow, the joys of this close-knit family and friends cannot help but yield a feel-good read. Though the ending is a bit of a cliff-hanger, it leaves one looking forward to what book number nine will bring.