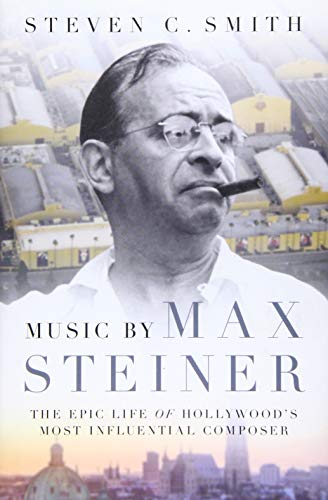 Max Steiner essentially created the concept of composing for the movies. From the start of the sound era, Steiner defined a musical orchestral “cinematic” scoring for the American movies. Music historian Steven Smith’s biography Movies by Max Steiner is a lively portrait of an Austrian immigrant who came to the US in the ’20s, leaving behind his privileged artistic background in Austria where he grew up as an aspiring pianist and in the company of family friends the Strauss brothers and Gustav Mahler. His father Gabor helmed a famous arts impresario empire that ended up in bankruptcy.

Steiner’s detailed narrative underscoring, sound effects, and classical integration were all innovations he brought to film. By the 1930s, movie moguls David Selznick, Jack Warner, and Irving Thalberg fought for his services.

Hollywood star Bette Davis knew he was so good that his music could upstage her acting. On the set of one of her biggest hits Dark Victory during her final scene she stops and asks her director Edmund Goulding if there was going to be underscoring to the scene and he lies to her and tells her no. “Good . . . because either I’m going up those stairs or Max Steiner is . . . but we’re goddamn well not going up together.” Later, Davis was grateful, “Dear Max . . . I’m glad we went up those stairs together.”

From his early work in silent pictures to his first smash success scoring King Kong for RKO studios, everyone loved Max and drove him to despair. The studios demanded that he score pictures in record time, compose full scores, and record them in mere weeks. The studio bosses fostered rivalries with his contemporaries (Erich Korngold, Alex North, Alfred Newman). He was consistently sleep-deprived, often rehearsing musicians well into the night, because of the studio factory system of only letting the composer see the film when it was just weeks away from its release date. Steiner took Dexedrine to handle the hours, he acted out by giving in to gambling addiction.

The studio bosses also knew Steiner was constantly in debt and always said yes. He lived extravagantly, gambled regularly, was generous to family, friends, and colleagues, he paid alimony to his first wife, sent money to his parents who were still in Austria. By the late thirties, he was desperate to get his family members out of Europe when Hitler invaded Poland and invaded Steiner’s homeland Austria. He’s got his father Gabor Steiner, then a widower, on the last refugee boat to the US.

Max was as busy as ever, scoring some of his biggest successes, Casablanca, Dark Victory, The Big Sleep, Sgt. York, Life with Father, Treasure of the Sierra Madre, Key Largo, Johnny Belinda, etc., picking up more awards and industry recognition.

But even with these successes, he had to pay more dues, contractually obligated to work on humiliating B-pictures that sapped his creative energy. That did not ease his money problems though, for one, he owed hundreds of thousands of dollars in back taxes.

Steiner and his wife, cellist Louise Klos, after ten years of marriage, started to have problems that continued even during the joyous birth of their son Norman and they adjusted to the pressures of parenthood.

Max’s obsessive work habits, as well as his gambling and boozing eventually took a toll at home. During one argument Max was suddenly so out of control that he threw an ashtray at Louise’s head, leaving a wound that required stitches. The incident caused her to separate from Steiner, subsequently picking up her opera career as a singer at age 35, moving to New York to study voice.

After the war, even though he was still sought after as Hollywood’s top film composer, his style was falling out of favor with the film executives

The style dramatically changed after WWII. Selznick had long bristled at Steiner’s musical literalism. Steiner was a master at scoring a character’s psychological themes that were considered brilliant and vital to several films. But directors more and more wanted to control what the score would be. Jack Warner was the exception who championed Steiner’s approach.

Steiner bristled back and stuck to his guns. Meanwhile, for years Steiner led the fight for film composers with ASCAP, the organization that didn’t count film score composers to receive any residuals from the films they scored. Representing all film composers, Steiner’s successful five-year fight for royalty rights from ASCAP benefited hundreds of composers.

Steiner married his third wife Leonette Blair in 1947, and they stayed together for the rest of his life, even though there was every indication that he never stopped loving Louise. He accepted the blame and failure of his marriage to Louise.

Problems with Norman, however, continued to escalate. After several brushes with the law, Norman enlisted in the army, but couldn’t take it, went AWOL, escaped to Hawaii, and committed suicide in a hotel room. Steiner was devastated; it took him months before he could start piecing his life back together.

As Steiner approached 60, his taxing lifestyle was taking its toll on his health, starting with the fact that he was going blind. The movie business was changing, and Steiner wanted to pursue other musical opportunities on radio and in concert halls, but his continuing financial problems prevented him from stepping away.

He had a late-career hit pop song from a teen melodrama A Summer Place that was recorded by the Percy Faith Orchestra and became a mainstream hit, so big that it rescued Steiner financially.

Smith doesn’t back away from Steiner’s composing techniques, but for those not used to reading about musical transcription, it can be heavy going. It is fun though, to pull Steiner movie clips up on YouTube to see and hear what is being analyzed in this book.