Music of the Ghosts: A Novel 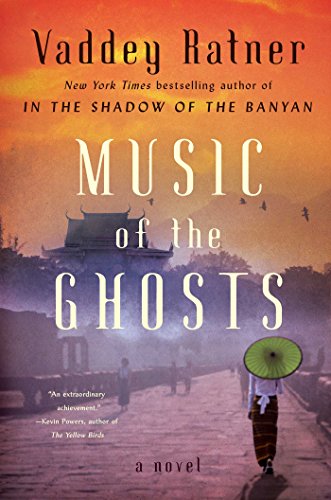 Vaddey Ratner’s second novel about the horrors of the Pol Pot regime in Cambodia and the price survivors pay is the story of Teera, a now-American woman who returns to her native country for the first time since her escape over 20 years ago. Her aunt and last surviving relative, with whom she narrowly escaped, has died and she is taking her ashes to their final resting place.

Teera has also received a mysterious letter from someone identifying himself as “the Old Musician,” who says he knew her father when they were both imprisoned. She wants to find out who this man is and what he knows of her father’s death. As it turns out, Teera and the Old Musician have more than casually entwined pasts. As their histories unfold and other key figures emerge and merge, the fictional narrative reveals their links as well as the unbearable brutality of the Khmer Rouge.

Ratner writes exhaustively about the Khmer regime and the pain it inflicted on a nation and its people, and therein lies a potential problem for readers who loved her first novel, In the Shadow of the Banyan, for Teera’s story itself becomes brutal and unbearable in its unrelenting descriptions of deprivation, torture, loss, and grief.

A troubling distance also exists between the omniscient narrator who tells Teera’s story and the reader, in large part because the tale seems to demand to be told in the first person, or from an exterior dramatic approach, in which a writer tells the story by sharing only what people say and do versus presuming to get inside their heads.

Here is the narrator describing what Teera feels. “She realizes with a pang of guilt that before she was even aware she loved her father, her mother, loved another human being, she had loved a place—this land, which, in her innocence, she didn’t understand as defined by borders, and geography, its relationship to other countries, only in the intimate sense of family, safety, and home.”

And here is Teera in her own voice writing in her journal. “Love, hope, humanity. These are the most durable possessions I have. I walk into a family scene, and find the scent of home cradled in a tray of spices. A cut of fresh galangal releases a bouquet of memories. The air is filled with the aroma of my childhood, fragrances that envelop and linger, haunt my senses like ghosts. I take a deep breath, inhaling the pralung of a lemongrass, and I feel nourished, healed, even if only in this moment.” Oh, to have more of that voice!

To her credit, Ratner paints vivid pictures, creates sympathetic characters whose grief we share, and offers meaningful reflections, the best of which are offered via the dialogue of others. Here, for example, is a kind abbot speaking. “Foreigners have often said that ours is a ‘culture of impunity.’ . . . What does it actually mean, impunity? Are we truly exempted from punishment for our crimes, when our culture, our core belief, tells us knowledge of the atrocity we commit is itself a punishment?”

Ratner is fundamentally a good storyteller, which the awards she received for her first novel testify to. That’s why it’s a bit of a let down when she falls back on a denouement that feminist readers may find disappointing.

Teera finds her way to peace (and the answers she seeks) with the help of a man she falls in love with who sounds almost too good to be true, and a child orphaned like herself, who appears deus ex machina-like, representing purity and hope. Once again a writer, a female one, finds no other way to end a woman’s story without giving her a prince charming and a child to help her find her way to renewed hope, identify and resilience.

Given Ratner’s personal experience of escape from the Cambodian genocide, such a critique may seem unkind. As she explained in a pre-publication interview, “An experience like this marks you forever. . . . You can never stop asking questions about what happened and why. . . . To this day, I’ve never learned what happened to my own father after he disappeared. . . . So I feel a duty to understand the suffering of others that is equal to or greater than our own.”

But the kind of experience Ratner and other Cambodians who survived needs urgently to be told. And that’s why telling it in a way that is not too hard to read, in a voice that resonates deeply within those who dare to “go there” with her, is imperative. It’s why we need more of Teera in her own voice, and less voyeurism into the atrocities that informed it. Ratner is entirely capable of telling a story that way. Hopefully, next time, she will.