The Music of Bees: A Novel 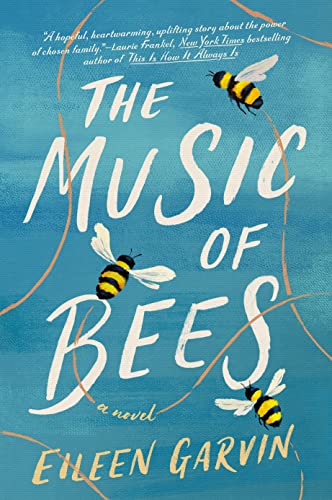 Life is stagnant for 44-year-old Alice Holtzman. She was born in the town of Hood River, Oregon, and her parents are a part of its history and have been well-known and respected for their apple orchards. Though now they are deceased, Alice sees life passing her by with unfulfilled dreams. An only child she once envisioned her future as a farmer taking over her folk's orchards, but instead, she's worked for the country for more than 20 years.

A self-imposed loner, Alice finds her main pleasure is raising bees. On her way home from Portland and purchasing 120,000 Russian honeybees to add to her hives, she narrowly escapes running over a young man in a wheelchair on a deserted road. Stopping to help him, she is relieved neither he nor his chair suffered any damage. Frightened and angry, she offers to take him home, and on the drive learns his name is Jake Stevenson.

Jake was also looking forward to a musical career for he won a scholarship based on his talent with the trumpet. But a stupid accident left him paralyzed and facing a life as a paraplegic. Wishing to run away, he finds his home life leaves a lot to be desired. For several years, his father has been surly and downright nasty to him and his mom, but she dares not speak up for her son, so living with them is miserable for Jake. With nothing to do all day he ruminates over his condition hating when his parents are home, so he sticks to his room wearing his earbuds, to not hear their fussing and fighting.

Dreading to return home, Jake wishes Alice would leave him on the lonely road. She gives him some information about her bees:

"A hive of sixty thousand honeybees, she explained, has one queen—leader and mother to them all. And ninety-seven percent of the other tiny golden bodies buzzing away in there are her daughters. The remaining handful is made up of males called drones. Daughters and sons recognize the queen by her scent, which is called her pheromone. The queen pheromone said, 'All is well.' It said, 'We are together.' It said, 'You belong here.'

"From the time they emerge from their larvae, those golden creatures know exactly what to do. The daughters are called worker bees, Alice explained to Jake as the light faded between them. The very first thing they do after hatching when they are known as callow bees is clean up the cell they were born in. Then they start taking care of the other baby bees, feeding them, and capping the larvae cells, and helping other newly emerging callow bees learn how to contribute to the hive. She told Jake how workers get promoted up the ladder as they got older, moving toward the front door to receive nectar and pollen from the bees that fly around collecting out in the field; those were called foragers. Some workers   eventually graduate to foraging or become guard bees, she explained. Guard bees kept watch at the entrance and only let in other bees that belonged there."

The boy is enthralled by her commentary and wants to learn more. All too soon they reach his house where he and Alice are subjected to his dad's wrath, making him want to crawl into her truck and hide.

Alice cannot believe a father could be so cruel to his only offspring, and she feels sympathy for the young man, but what can she do? She needs to worry about her own life. And worried she is, because the accident with Jack is distressing her bees, and she wonders if some did not survive. She arrives home unnerved, though her cargo appears to be okay.

Alice discovers Jake's backpack in her truck and knows she must return it to him, yet she's not about to get into another scene with the irascible father, so she decides to wait a few days, hoping the man will not be home.

In an aside, 24-year-old Harry Stokes enters the plot. Harry, with a prison record from a stupid mistake he had made now is looking for a fresh start. He moves to Oregon to stay with his great uncle H who lives in the woods in a ramshackle trailer without the luxury of running water and electricity, but at least Harry and H are compatible. Living conditions are deplorable, but much better than jail or listening to his stepfather berating him.

With no money to speak of, Harry must attain employment, so he can start over. Uncle H is elderly and not well and though Harry loves the "pastoral beauty" of the forest, he cannot stay there forever mooching off H.

Alice decides she needs help with her enlarging colony and must place an ad. First, she stops at Jake's house to return his backpack only to be confronted by his bully father who shows his true colors. Fearful for Jake, she mentions her need to hire someone and offers a job to Jake, which he accepts immediately, ecstatic to leave his dad.

Jake proves to be a natural with the bees and believes he's found his calling, but he realizes he is not physically able to handle some chores that need doing. This is where Harry comes into the picture to perform the duties Jack cannot. By this time Uncle H is taken to the hospital for he is extremely ill, and his trailer is hauled off to the dump. With no place to say, Alice offers her room and board in the barn, while Jake takes the guest room in the house.

Before long, the trio bond, and Alice enjoys the company of the two young men. They prove to be an asset to her farm as well as her mental health, for she had    been holding herself aloof from everyone and suffering grief she does not want to share.

This is a debut novel, which not only gives readers insight into raising bees but also takes away the fear many may experience with them while it explains the complexities of their lives and their jobs. Each chapter is prefaced with additional facts about bees as told by the L. L. Langstroth method--Langstroth is considered the father for American beekeeping, and the comments offer insightful information that is both educational and fascinating. In addition to this, the reader gets to meet three unlikely individuals who bond together to overcome their fears, sorrows, and upsetting pasts to learn how to grow, heal, and find a lasting camaraderie.