The Muses Go to School: Conversations About the Necessity of Arts in Education 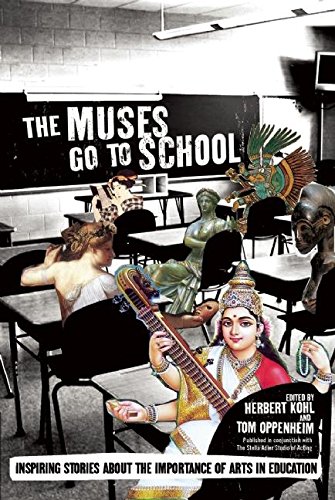 “Parents fighting to keep band, orchestra, drama, and dance programs alive in their children’s schools need to read The Muses Go to School: Conversations About the Necessity of Arts in Education and send copies to their legislators.”

Schools across the country are under pressure to teach more math and science courses. Since educational funding is finite many are eliminating art, music, and drama in the process. The authors of The Muses Go to School have provided fresh proof of the vital role the arts plays in educating students. Though the evidence in the book is anecdotal, it is compelling.

Herbert Kohl and Tom Oppenheim have edited a collection of autobiographical essays by famous people in the arts world who tell their own personal stories about the difference arts education made in their lives.

Each artist’s personal story about his or her engagement with the arts is accompanied by an analysis from an educator who gives insight into the particular artist’s transformative experiences.

“When I got with the theater,” says stage and screen actor Philip Seymour Hoffman, “there were teachers that I started connecting to on a much more cultural, artistic level through my enthusiasm for theater. My whole academic performance went up in high school.”

Hoffman describes a life-changing event performing in a school play as a 4th grader. “I remember when I had to perform Tom Sawyer, being very sick with nerves and then going out and doing it anyway and then feeling the release of that. It required concentration and walking into the fire with my fear.”

With so much research available on learning differences among children, the argument for retention of drama, music, creative writing, and dance programs is especially compelling.

Whoopi Goldberg, world-renowned comedian, actor, talk show host and social activist, is dyslexic. As a child, she had trouble reading but could always describe what she saw. She says many dyslexics (the singer Cher comes to mind) go into the arts “because for us it’s a way to communicate that is safe and comfortable.”

“The idea that somehow the arts aren’t as important as reading, writing, and arithmetic is generally held by people who haven’t had a child who needed other ways to learn. . . . No one is left out of the arts,” says Goldberg.

The artists in the book advocate more arts emphasis in education not necessarily so there will be more artists, but so young people will be able to discover a means of identity and self-expression, losing the fear of exploring their true potential in the process.

“This sense of possibility is not encouraged enough in education,” says Hoffman, who sits on the board of a public school in the Bronx in which everything in the curriculum is influenced by the arts.

Mr. Kohl says rigid educational delivery and emphasis on test performance is creating a dichotomy in students’ lives. For a large part of the day, they sit encoding information and then taking tests. The other part of their lives is deeply involved in social media, making their own videos, creating graphics, and communicating creatively. In most cases, these activities are completely separated from the academic learning process. Mr. Kohl advocates integrating creative activity into all aspects of learning—drama, dance, music, and the visual arts.

“The arts play a powerful role in shaping young lives,” says author Kohl. “And the struggle for some to achieve academic excellence and a positive, imaginative sense of one’s place in the world without the benefit of the arts is a form of impoverishment.”

Tom Oppenheim, son of famed theater teacher Stella Adler, is the artistic director of the Stella Adler Studio of Acting: “We have learned that the arts inspire a profound and personal self-confrontation on a multiplicity of levels: physical, vocal, imaginative, emotional, and intellectual. They also inspire community and the skills needed to function and be creative with and for other people. The rigors of artistic discipline lead organically toward self-transformation. They help break down received and self-inflicted stereotypes by opening both the mind and heart.”

Parents fighting to keep band, orchestra, drama, and dance programs alive in their children’s schools need to read The Muses Go to School: Conversations About the Necessity of Arts in Education and send copies to their legislators.