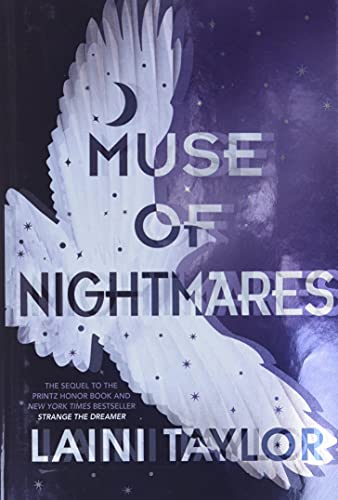 “The scope of this brilliantly imagined story is breathtaking. In it we cross dimensions and enter worlds never before seen . . .”

Second in a duology, Laini Taylor’s award-garnering Muse of Nightmares is best enjoyed after reading the first book, Strange the Dreamer. Muse of Nightmares starts where the previous book left off. Cinnamon-haired Sarai had fallen from the gigantic seraph that looms over the city of Weep. She died when she landed, heart impaled on an iron fence, red blood flooding from her blue body. Sarai’s ghost emerged from her shattered body and gazed up at the home that seemed forever lost.

Tiny Minya captures Sarai’s ghost and controls it as she controls so many others. “The little girl was stronger than the world’s whole sucking mouth. She pulled ghosts right out of its throat while it tried to swallow them whole. She’d pulled Sarai out. She’d saved her. That was Minya’s godspawn gift: to catch the souls of new dead and keep them from melting away.”

Minya is set on using her ghost army to kill the villagers of Weep. For decades, gods and goddesses had lived in the seraph, stealing young wives and the occasional young man to bear or sire their children. It seemed fair enough for the Godslayer Eril-Fane to lead villagers into the seraph and kill the gods and goddesses for their depravity. But they went too far when they began killing the half human, half god children as well. They had been so innocent, so small, their gifts not yet developed. Six-year old Minya could only save four. The villagers were sure all the children died, so they’ve lived in the seraph for the past 17 years without harassment.

The scope of this brilliantly imagined story is breathtaking. In it we cross dimensions and enter worlds never before seen where the thousands of godspawn children who came before Minya and Sarai were sorted and sold according to their magical gifts. Some control fire or clouds or free will. Only a few are strong enough to navigate the portals between the worlds that lay stacked one atop another like pages in a perverse book, separated by portals nearly impossible to navigate.

As Sarai, Lazlo Strange the dreamer, Minya, and a handful of others struggle to understand what’s going on, we meet Kora and Nova, two powerful sisters separated hundreds of years ago, one to become an avenging legend, and the other doomed to search through time and space for the only person she’s ever loved. Kora had been responsible for stealing and selling hundreds of godspawn children, although unwillingly and only in return for the promise to save Nova’s life.

Nova, unaware Kora has long been dead, has the ability to steal any gift she wants, turning her search for Kora into a bloody trail of destruction through the centuries. “There comes a certain point with a hope or a dream, when you either give it up or give up everything else. And if you choose the dream, if you keep on going, then you can never quit, because it’s all you are. Nova had made that choice a long time ago.”

Can Sarai, whose gift is entering dreams and bestowing nightmares upon the sleepers, turn her gift to good? She enters Minya’s dreams to discover the fear, horror and hatred that cause her to snag ghosts before they disappear and turn them into her own avenging army. Nova dreams only of violence, and of searching through endless worlds for her lost sister. Minya and Nova both need saving as much as the Godslayer had.

Sarai brings Kora and Nova together in Nova’s dream, where she learns Kora is dead. “Sarai was standing, devastated in the dream, her arms wrapped around herself . . . Nova met her eyes, and Sarai felt like she was falling with her into the black place inside her. There could be no denial after this. Kora was gone and Nova knew it.”

The story’s unexpected twists and revelations make it difficult to put down the book. The suspense ramps up as secrets are revealed until the surprising and satisfying ending plays out.