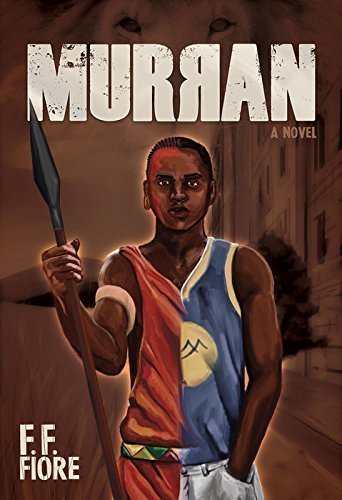 “From the dark, grimy delinquency of Brooklyn to the hot grasslands of the African savannah, Fiore’s exhilarating story and unforgettable characters sweep the reader onward.”

Murran, set in the 1980s, is the story of fifteen-year-old Trey Davis. He and his teenage sister move to Brooklyn to live with their stern grandmother after their father is murdered and their mother, a drug abuser, is largely absent. Vulnerable, with no stability or mentor, Trey desperately seeks respect and a sense of belonging, of being valued. But his morals have been compromised by a lack of guidance.

Years earlier, Trey’s father had shared a picture of a Massai warrior that captivated Trey’s interest. Seeking approval from his new friends in Brooklyn, Trey joins a street gang called the Warriors. Caught in a life of crime, Trey is in a downward spiral. His judgment is poor and mistakes follow.

After he receives bad grades, Trey’s grandmother forces him into tutoring with one of his teachers, Mr. Jackson. Jackson, who grew up as part of the Massai tribe in Africa, shows Trey a picture of a Massai warrior just as his father had done years earlier. Trey is fascinated. To escape the fear of going to juvenile prison, Trey agrees to go with Jackson to his tribe in Africa. The night he is to leave, Trey is involved in a gang shootout and framed for murder. He goes to Africa to escape justice.

With the Massai tribe in Kenya, Trey learns another kind of fear. Each day carries the chance of being attacked by a wild animals or other tribes, or to die of thirst from drought. Trey also learns the real meanings of trust, responsibility, and ethical behavior. He falls in love and learns to be a constructive member of the tribe and to accept accountability for his actions. After killing a lion in self-defense, Trey becomes a Murran: a warrior and member of the Massai.

From the dark, grimy delinquency of Brooklyn to the hot grasslands of the African savannah, Fiore’s exhilarating story and unforgettable characters sweep the reader onward. Trey must grow up very fast with the Massai, and Fiore shows his reader how important responsibility is to any mature person. The bond of obligation to the welfare of others marks the quality of the true Murran.

Author Frank Fiore delivers rich characters, well-researched events, convincing dialogue, and haunting narrative. Trey’s life and death struggles are captivating, well supported with plot and tempo. The story is energetic and it flows smoothly with clever use of tension and release. The spellbinding scenes are colorful and memorable. The book is certainly suitable for all adult and young adult readers.