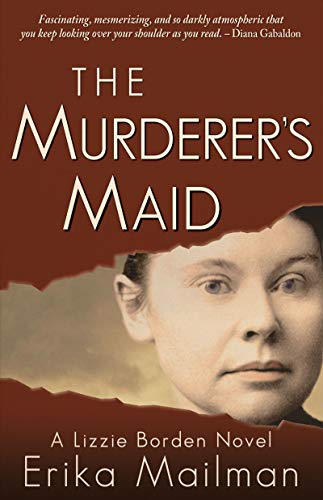 “the most frightening book to be published this year . . . Lizzie Borden . . . reminds one that the scariest monster is always a human one.”

Bram Stoker Award Finalist Erika Mailman writes a page turner of a thriller that will fascinate as well as terrify. If The Murderer’s Maid: A Lizzie Borden Novel doesn’t win an award from some professional writers’ organization, there is no justice or judgement in the world of writers.

“Lizzie Borden took an ax and gave her mother forty whacks. When she saw what she had done, she gave her father forty-one.”

Actually Lizzie gave her stepmother, Abby Borden, 20 whacks, and her father only 10, but then rhyming doggerel isn’t usually known for its accuracy as much as for its melodrama.

The reverse is not altogether true of The Murderer’s Maid, but the fictional additions to the tale of Lizzie Borden are not melodramatic as much as simply dramatic. The scene where Lizzie tries to help her decapitated pigeons find their missing heads is dramatic in the manner of a Greek tragedy: horrifying, over-the-top, signifying the madness induced by a hurt so deep it cannot be contained.

“Father murdered it and all of them,” said Miss Lizzie in a low awful voice. It was such a voice, indeed, a growl from some hell the woman had reserved inside her, half feral, . . .”

Lizzie braces the heads upright and lays the pitiful bodies in a row. “Each gets to pick its own body,” she said. “We can never know now which is proper, so they get to decide.”

Mailman states in her Author’s Note that this particular scene is imaginary, but it serves to underline the unstable state of Lizzie Borden’s mind, and the incredible insensitivity of her father. In fact, given the number of instances in which Andrew Borden disregards the feelings of his youngest daughter, one is surprised that Andrew received the fewer number of whacks.

Mailman interweaves the story of Lizzie’s descent into the vortex of hate that finally erupts into murder as seen through the eyes of Bridget Sullivan, the Borden’s maid, with the contemporary story of Brooke, illegitimate daughter of a Mexican immigrant, who flees from city to city to escape the men who seek to kill her.

Bridget Sullivan, an Irish immigrant, takes a position as a maid for the Andrew Borden household. The family relationships are toxic. The two daughters, Emma and the younger, Lizzie, are estranged from their father and stepmother, speaking only when unavoidable, and eating at separate times.

The Borden’s former maid warns Bridget that the Borden household is unsafe. “I worry Miss Lizzie is dangerous . . . She isn’t right, and if you don’t see it yet, you will.”

Bridget learns a few hours later what the former maid is trying to tell her. As she climbs the backstairs she sees a dark bulk on the narrow stairway. It is Lizzie Borden. Bridget “forced herself to continue climbing, no hitch in her step, as they drew even and Miss Lizzie’s silver eyes caught hers . . . The coldness of the gaze shocked Bridget. It was imperious, frigid glance of someone who did not care . . .”

Brooke, is an alias, one of many that Brooke uses as she flees from one city to the next, living under the radar. She owns no car or phone, always pays cash for any purchases.

An orphan who aged out of the foster care system, Brooke has no family and no friends except for Miguel who was also in the foster system. Miguel is the only friend on her Facebook page. It is a lonely, stressful life that allows for no permanent relationships, but Brooke believes it is the only way she can escape detection by her pursuers.

They murdered her mother, and they will murder her.

Brooke voraciously reads true crime books “to understand the motives, the thinking behind the pursuit . . . because maybe when they came for her for real, she’ll know what to say.”

When Anthony, a young lawyer, asks Brooke out, she accepts although it turns out to be a mistake. Brooke is incensed when Anthony defends the right of criminals to a fair trial. “Everyone deserves fair representation.”

“But what if it’s clear as day that they’re guilty? It’s already proven? They’ve got blood dripping off their hands, standing over the victim, their boot print in the victim’s face. Why do they deserve a trial?”

Brooke and Anthony agree to disagree on the criminal justice system, and they grow closer even as Brooke finds that objects in her apartment are not quite in the precise position she left them. She has been found. It is time to move on, adopt another identity, and leave Anthony behind.

Brooke doesn’t want to run again; she wants a normal life. In a last desperate effort to escape the life of a fugitive, she searches for information on her father and his family to plead for their help. What she finds is a link between her life and that of Lizzie Borden.

Mailman in her Author’s Note lists those scenes which are fictional, helpful for those unfamiliar with the details of Lizzie’s life. She also provides a short bibliography for those interested. A Private Disgrace by Victoria Lincoln is a very detailed account of Lizzie, her motivations, her trial, and her life after acquittal, although her description of the relationship between Bridget and Lizzie differs greatly from that of Mailman.

The Murderer’s Maid by Erika Mailman is the most frightening book to be published this year or for many past years. What makes it so frightening is Lizzie Borden. Her character reminds one that the scariest monster is always a human one. Don’t read this at night; it will give you nightmares.