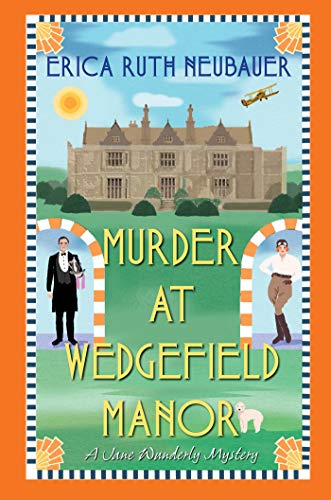 “A delightful cozy romance and mystery, set in the middle of a decade when times might be changing but the motives for murder remained surprisingly the same.”

It is 1926. Young widow Jane Wunderly has returned from her trip to Egypt where she and the mysterious Redvers solved a murder. Stopping at Wedgefield Manor in Essex, she and her Aunt Millie spend some time with Lord Edward Hughes and his adopted daughter Lillian, who is actually Millie and His Lordship’s biological child.

“I’d learned that Millie was Lillian’s natural mother during our time in Egypt. Millie and Hughes had an affair resulting in Lillian, and Millie had given the baby over for adoption to Lord Hughes and his wife.”

Millie and Lillian met at Mena House, and she and Jane returned with the girl to England where the now-widowered nobleman lives.

Lord Hughes’s staff is a surprising group, made up of veterans of the Great War whom His Lordship provided with employment. There’s Flight Lieutenant Simon Marshall, a former aircraft mechanic who takes care of the vehicles for the estate; Group Captain Christopher Hammond; and Sergeant William Barlow, from the West Indies, an amputee and the victim of racial prejudice.

Captain Hammond is teaching Jane to fly a Moth biplane, much to her Aunt Millie’s chagrin, while Lieutenant Marshall awkwardly courts Lillian.

Everything is going well until social-climbing Aunt Millie makes a snide remark about Simon’s attention to Lillian. “Edward,” Millie’s voice was loud and carried across the room. “Do you think it’s proper for one of your servants to socialize with the girls?”

Angry and embarrassed, Simon bolts from the room, gets into one of Lord Hughes’ cars, and races away. Since this is his usual way of reacting to anger, no one worries, until the next day when there’s a new arrival at the estate.

“I was about to excuse myself when an unexpected voice from the doorway broke the spell.

‘Good morning, everyone. I hope I’m not disturbing you.’

My heart leapt into my throat at the sound of that deep rumbling voice and I turned slowly to face him.

Redvers always seems to turn up when there’s trouble, and today isn’t any different. There’s been an accident. The car driven by Simon Marshall has gone off the road and the lieutenant was killed.

Redvers discovers the car’s brake cables have been tampered with. The police, in the person of Inspection Greyson, converge on the estate, along with Lord Hughes’ niece and nephew, children of his estranged brother.

Inspector Greyson becomes as interested in Jane as he is investigating the murder, though he doesn’t believe it’s right and proper for her to delve so deeply into the gory details. Jane thinks otherwise as she and Redvers gather evidence. When it’s discovered the gas line on the Moth has been cut, her flight lessons are indefinitely postponed, but who would want to harm Jane, a mere guest at the estate?

Is she getting too close?

Add a poisoning, a fugitive Communist, a bit of unsavory background about Lord Hughes, and a simple case of murder transforms into something else altogether.

The knife used to cut the plane’s gas line is discovered in Lord Hughes’ room, as are the bottle of poison and a razor used to slash a guest’s bedding.

Sergeant Barlow volunteers the information that Simon bragged he had information about Lord Hughes. “He wouldn’t tell me, though I asked him several ties. But I know it wasn’t anything good.”

There’s also the attraction between Jane and Redvers that makes the young widow ready to re-think her current single state. “It had been like this when I kissed him in Egypt, and if anything, the sizzle had intensified.”

The sizzle has to be put on hold, however, so the case can be solved.

Following the adventure of Murder at Mena House, the Widow Wunderly and Redvers the mysterious “government employee” are back together again, solving another murder, and becoming even more bogged down in what could become a love affair (or more) if they’d let it.

A great deal goes on in this novel, and there’s plenty of commentary on society views of certain people and lifestyles after World War One, from communists to gays to a woman’s place in that society.

Through it all, Jane Wunderly keeps pace with the man the reader rightly deduces is meant to become not just her friend but also her lover, if she’ll dismiss the memories of her mistreatment by her late husband.

Redvers keeps trying, however. As he and Jane once again bring a murderer to justice, there’s hope for the two in other areas as well.

A delightful cozy romance and mystery, set in the middle of a decade when times might be changing but the motives for murder remained surprisingly the same.