Murder, She Wrote: Murder in Red 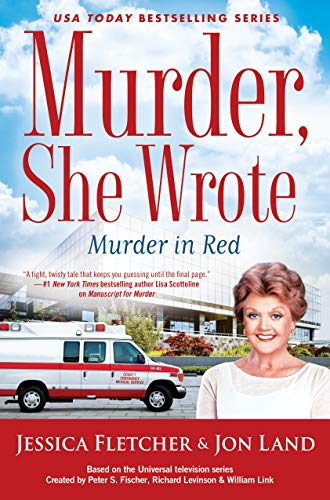 “Jessica Fletcher experiences numerous crises, a lot of tension, and a multitude of unexpected events as she falls down this rabbit hole while investigating two murders and attempting to prevent a third.”

Jessica Fletcher and Jon Land have once again documented a murder event in Cabot Cove, ME, for the enjoyment of Murder, She Wrote fans.

It should be said, up front, that in Murder, She Wrote: Murder in Red there is a disturbing aspect to this story that, once put in print, cannot be reversed. And that is the enormous growth of Cabot Cove. Once a comfortable small community of 3,000 (+) residents, the town has now tripled in size with high rises, condominiums, shopping malls, and displaced mom and pop stores.

The once welcoming small-town environment has become a large city and is no longer fun to read about.

Having said that, however, the story itself is strong, the plot a good one that has the reader turning the pages with lightning speed.

The book engages all the regulars—Mort Metzger, Sheriff of Cabot Cove; Seth Hazlett, resident doctor; and even Harry McGraw, private eye. It is comforting for fans of both the TV and the book series to rely upon the appearance of regular favorites.

The story opens with Jessica attending the funeral of the town’s long-term librarian, and while there, her good friend Mimi Van Dorn experiences a seizure. Mimi is taken to the hospital where she dies. Not one to take a friend’s death lightly, Jessica smells a rat—a rat that unplugged a medical device, ultimately ending Mimi’s life.

Upon further investigating, Jessica discovers that Mimi had been a patient of Charles Clifton, founder and owner of the newly created Clifton Care Partners Clinic, where she was participating in a clinical trial of a medicine designed to reverse signs of ageing.

As Jessica continues her search for clues, an old friend from Scotland Yard, George Sutherland, appears, and Jessica learns that he will be a patient at the clinic for a cancer he has been diagnosed with—a development that she never expected.

She digs deep, as only Jessica can, and her investigation takes her to the FDA where she learns about clinical trials, an education that causes her additional worry.

After gathering information from the FDA, Jessica follows more breadcrumbs to the pharmaceutical company that has provided Mimi’s medicine to the Clifton Care Partners Clinic for an unauthorized clinical trial. Upon meeting Jeffrey Archibald, CEO of the pharmaceutical company, she discovers that the company will also provide the medicine that will be used in the clinical trials by George Sutherland.

At the same time, she discovers that her friend Mimi had a paraplegic son, whom Jessica knew nothing about. Upon visiting the son, she learns that Mimi had stopped the trust fund set up for his care, only to use the money to further her treatments at the clinic. Worrisome, indeed, since the son, Tripp, will now be unable to remain in the clinic where he has been living.

Concern for her friend forces Jessica to alert George to the situation, and within days, George disappears. As well as this disappearance, Mort Metzger informs Jessica that Tripp Van Dorn has died. Although presented as a suicide, Jessica insists this is another murder, and she is convinced that both murders as well as George’s disappearance are connected to the clinic and the pharmaceutical company.

In need of more information, Jessica convinces Harry McGraw to drive her to Marblehead, MA, where the automobile accident that caused Tripp’s injuries a decade earlier occurred. She is directed to a nursing home where the retired police chief, who suffers dementia, was the man in charge of investigating that accident. His words don’t make a lot of sense, but there are clues that Jessica uncovers—clues that shed a whole new light on Mimi Van Dorn’s life, her son’s accident, and the misrepresentation of the clinic and pharmaceutical company.

Suffice it to say, Jessica Fletcher experiences numerous crises, a lot of tension, and a multitude of unexpected events as she falls down this rabbit hole while investigating two murders and attempting to prevent a third—George Sutherland’s.

As with all Murder, She Wrote stories, this one culminates in a satisfactory ending, although not one where Jessica makes the final discoveries. With the changes to Cabot Cove, and the twisted ending, it’s difficult to determine how any of the stories in this series will continue. With Cabot Cove’s growth, the entire sense of location is lost. Will Jessica and her group of cohorts move to another small community and start over? Probably not, but the sense of community is adrift, making future readings disappointing for true fans.

That consideration notwithstanding, the story is a good one and a fast read.