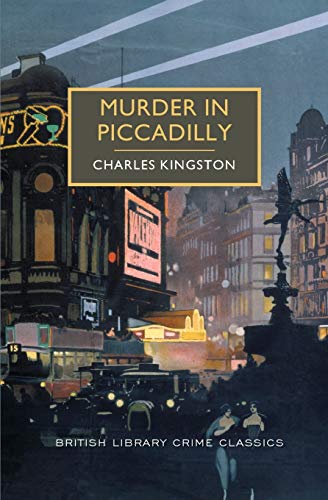 “highly recommended for all readers, not just those interested in the Golden Age of British crime writing.”

There is Massy Cheldon, owner of a country estate worth ten thousand pounds per annum; his nephew, Bobbie Cheldon, heir to the estate who wishes his uncle a short life; Bobbie’s widowed mother, Ruby, who has spoiled her son; Nancy Curzon, a beautiful nightclub dancer, best described in the parlance of the 1930s as “common;” and Nosey Ruslin, who lacks both principals and scruples.

While Agatha Christie and Dorothy L. Sayers, best known authors of the Golden Age of crime writing, describe their country estates in loving detail, Mr. Kingston explores the lower social sub-class known as Bohemians in their natural habitat of London nightclubs. Although the author draws a vivid picture of the genteel poverty of Bobbie’s and Ruby’s flat, he concentrates more on character than setting.

Massy Cheldon is an unpleasant man, tight-fisted, mean-spirited, resentful of his nephew’s youth and good looks. “Resentment deepened into something lower than mere jealousy when he reminded himself that all this youth and vivid enjoyment might one day—perhaps, soon—be allied with wealth. A street accident, poisoned food, any of the ordinary ills of life—the middle-aged man who was obsessed by meanness shuddered at the thought of being parted from his museum of coins, banknotes, share certificates, and rents.”

Bobbie, for his part, despises his uncle. “How often had Bobbie grumblingly adverted to the fact that every day his uncle lived he, the misunderstood heir, lost a day’s income.”

What is more unfair, in Bobbie’s estimation at least, is that Uncle Massy stands between him and Nancy, the dancer, the girl of his dreams. Nancy Curzon makes her feelings very clear on the subject of marriage and money. “A job! I don’t want to marry a man with a job. I want to marry a man who can afford to do without one!”

Bobbie either ignores, overlooks, or believes that Nancy’s ambitions to marry a rich man are not those of a materialistic gold digger. A girl expects to be supported in comfort. He just needs to find a way to become a wealthy man without the necessity of actually earning money.

Uncle Massy sees more in Nancy than youth, beauty, and crass ambition and tells his sister-in-law so. “Ruby, this girl has done more than make Bobbie fall in love with her—she’s transformed him, and I believe she’s got sufficient influence over him to drive him to any extreme.”

As Ruby recalls her son’s interest in their daily help, Florence, and her belief that her boyfriend arranged his own uncle’s murder in order to inherit a newsstand and five hundred quid, “A haunting dread passed over her like a spasm of impulsive terror. . . .” She tries to push away her thoughts that Bobbie might murder his uncle.

Uncle Massy doesn’t believe his nephew has the “pluck” to murder him, but he warns Ruby of her son’s weakness of character. “The weak can often become strong in the hands of the unscrupulous.”

Thus enters the unscrupulous in the person of Nosey Ruslin with his “large and bulging eyes, a sensual mouth, and ears than resembles a couple of cauliflowers waiting their turn to be washed.” He also has a flattened nose, a good intellect, and no principals whatsoever.

Nosey has a plan to help Bobbie clear a path to the altar and marriage to Nancy by arranging to remove the impediment of Uncle Massy. The words “murder for hire” are not used, just the term “services rendered,” and Bobbie, in the running for the title of “stupidest young man in the universe,” signs a contract so stating with Nosey.

Uncle Massy meets his end in the Piccadilly tube station via a knife through the heart. There are dozens of witnesses, but no one seems to have seen who murdered the rich old curmudgeon.

To Chief Inspector Wake of Scotland Yard it seems obvious that money is the motive for Massy Cheldon’s murder, and Bobbie is the obvious suspect. The problem for the chief inspector is that not only does Bobbie have an alibi in the person of Nosey Ruslin, but the young man lacks the character to commit murder. “He’s not a murderer, Clarke, and never could be, but he’s a spoilt, self-important and lazy young man.”

Wake’s suspicions rest on Nosey Ruslin. He is sure Nosey arranged the murder, probably for a share of the Cheldon estate, and Wake intends to prove it.

Murder in Piccadilly is a humorous mystery that will entertain the modern reader as much as it did at the time of its original publication in 1936. Charles Kingston provides an unexpected twist at the end that will deflate those who are sure that Chief Inspector Wake will solve the case with Nosey and Bobbie, as well as the actual murderer, facing justice at the Old Bailey. The guilty do face justice, but in a very unexpected fashion.

Murder in Piccadilly is highly recommended for all readers, not just those interested in the Golden Age of British crime writing.