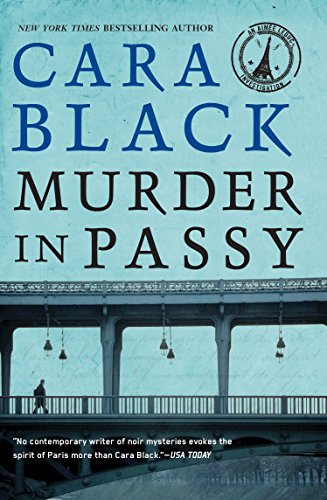 There is so much frenzied activity going on during the three days that Aimée Leduc is trying to solve a murder for which her beloved godfather and police Commissaire Morbier is the prime suspect, that it’s a wonder she has anytime to sleep.

Perhaps if she had been able to stop for an espresso and take a deep breath in her office on rue de Louvre, (one of the swankiest addresses for a detective agency in Paris.) she would have been able to calmly figure out who was responsible for the death of Xavierre d’ Eslay, a haut bourgeois matron of Basque origin and the girlfriend of Morbier. Instead, the dauntless French-American Aimée must run through the cobblestone streets of Paris trying to solve the murder while bringing the reader along for the bumpy ride.

The plot is at times puzzling and occasionally hard to follow, but since Aimée is so tenacious in her quest to find the real killer, the reader would feel guilty putting the book down, so the chase continues.

As Morbier says in the first few pages of the book; “You think life finally makes sense, then alors . . .” he shrugged. “Pouff, it turns upside down.”

The story continues to move upside down, sideways and every which way until the final pages when it is wrapped up like a package at Bon Marché.

Aimée is of course the one who discovers Xavierre’s body in the garden of the matron’s home in Passy, located in the 16th arrondissement, on the Right Bank. It is traditionally home to many of the city’s wealthiest residents, which makes the murder even more of a surprise to the neighbors. (The author sets each of her books in one of the 20 arrondissements, or neighborhoods, that make up the city of Paris.)

Even though Morbier’s footprints have been found at the crime scene, Aimée is convinced that her godfather could not be a killer. (Although when he is told about the murder of his lover, Morbier expresses as much angst as a French waiter taking an order for escargot.)

With the help of René Friant, a partner in her private investigation agency, Aimée searches into Xavierre’s past, hoping to find the murderer and the reasons behind Madam’s death.

Until Aimée finds a pamphlet from the Basque separatist group Euskadi Action in her mail, and wades through even more murders and the kidnapping of a Spanish princess does she realize why Xavierre was killed.

Aimée is a fantastic guide as she invites the reader along on an excursion of Paris on the back of her scooter, which most tourists traveling to the City of Light never see. Back streets and alleys, smoky bistros and Paris mansions set the backdrop for this mystery and in the end the author manages to provide a surprisingly satisfying solution to Xavierre’s murder.

Ms. Black’s series of books, set in 1990s Paris, are most interesting to Francophiles, each book introducing an eclectic and exciting neighborhood to the armchair traveler. To hardcore mystery fans the plots—such as this one—can be a little confusing and cluttered, but as the French say, C’est la vie.