Murder at the Opera: An Atlas Catesby Mystery 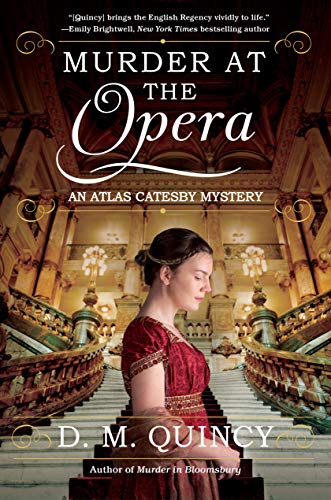 “an intriguing and tightly written drama, pointing out as it does that what one wishes to be true, and what actually is the truth don’t always mesh.”

Atlas Catesby is escorting his beloved Lady Liliana from the opera when he is told a murder has been committed outside. He is further shocked to learn the victim is Wendy Pike, mistress of his former brother-in-law, Malcolm Lennox, the Marquess of Vessey, the man Atlas believes killed his sister Phoebe.

What’s even more shocking is that Vessey appears to be completely distraught by Wendy’s death.

“When Vessey reached his mistress’ side, he crumpled. A harsh, feral sob escaped the marquess before he bent over the body and wept.”

This does nothing to change Atlas’ hatred of the man, however.

Atlas soon learns Wendy Pike was a very contradictory woman. A young clergyman seeks him out, saying that Wendy was planning to leave Vessey, marry him, and go to Wales to lead the wife of a country pastor.

“She was going to leave her sinful past behind to become my wife.” The clergyman’s voice broke. “She was dearer to me than my own life.”

Also, the owner of the opera house outside which she was killed, says she was planning to sign a contract with him to begin singing there.

“Mrs. Pike had accepted my offer. She’d decided to leave Vessey for a life on the stage.”

The current star of the opera is also known to have come to blows with Wendy over a visiting Russian nobleman.

The clergyman, Mr. Brown, asks Atlas to discover who killed Wendy, and Atlas, who believes Vessey is the murderer, agrees. Nothing would give him more pleasure than to finally bring his ex-brother-in-law to justice, even if it isn’t for his sister’s death.

Wendy and Vessey had two daughters, but now Atlas discovers they also have a son, who has been kept secret and is away at school, a son a few years older than the marquis’ legal heir, Atlas’ nephew Nicholas, who has been prevented from associating with the Catesby family.

The more Atlas learns about Wendy Pike, however, the more puzzling the woman’s life shows.

“Everywhere Atlas turned, he encountered another contradiction about the dead woman’s intentions for her future. Atlas somehow felt further than ever from finding her killer.”

Soon, however, there’s another murder, and facts start to come together. What they reveal isn’t to Atlas’ liking, for it appears his nephew Nicholas may be involved. Having just met Nicholas after 20 years, Atlas wants Vessey to be the murderer but the clues point elsewhere. Will the inquisitive Mr. Catesby solve the crime if it means incriminating his nephew for whom he’s taking an instant liking as his beloved late sister’s child? Atlas must do some severe soul-searching as the decisive moment draws near.

This third entry in the Atlas Catesby mysteries is an intriguing and tightly written drama, pointing out as it does that what one wishes to be true, and what actually is the truth don’t always mesh.

Between searching for clues and interviewing the people in Wendy Pike’s life, Atlas is also faced with a momentous decision about his relationship to Liliana, the noble lady who was the subject of the first novel, Murder in Mayfair. Will the young man whose father was recently-elevated to nobility dare tell Liliana exactly how he feels about her or does he still think his status isn’t high enough?

The other characters in this particular novel are many and varied, but all are given their space with detailed characterizations. Indeed, even the eventually-revealed killer may earn some sympathy from the readers because of author Quincy’s descriptions.

Murder at the Opera is an entertaining novel, set in the lively and romantic London of the early 1800s.