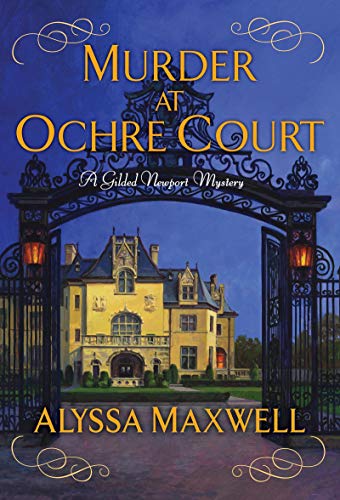 In Murder at Ochre Court author Alyssa Maxwell once again reveals her skill at creating a well-planned mystery with all the clues, foreshadowing, and red herrings needed to engage the reader and keep one reading.

Maxwell’s protagonist, Emma Cross, returns from New York to Newport, Rhode Island, ostensibly to cover the coming-out gala for debutante Cleo Cooper-Smith. But Emma has other plans as well. She sees her desire and drive to prove herself a capable female journalist in a man’s world as unfolding as she also follows Silas Griggson, a wealthy New York real estate developer with a shady history and a story to be told.

Her first step at covering the debut is to meet and interview the debutante and her patroness, Mrs. Goelet. Emma is no stranger to the wealthy set, as she counts the Vanderbilt family as her relatives—once or twice removed—so moving among these people is second nature to her. Of course, the purpose of the coming out party is to put Cleo on display for potential husbands, and Mrs. Goelet has picked out just the man for Cleo: Silas Griggson.

The stage is set for the grandest display in the history of Newport’s social set. As the party progresses, Silas approaches Cleo for a dance, and she summarily disregards his advances. Nothing is simple in the world of the socially privileged, and Emma senses an undercurrent of anger, jealousy, and subterfuge as she works the room, meeting and interviewing the elite.

But no one is prepared for the electrifying results of the party when the star performer, Cleo, dressed as Cleopatra, sits on her throne and to the horror of the attendees is electrocuted.

The sparks start to fly when Silas accuses the workman, Dale Hanson, who installed the electrical system at Ochre Court, of murdering his fiancé, although his position as such is unknown to everyone. Dale and police detective Jesse Whyte, rush to the scene, and both are nearly electrocuted.

Convinced that Cleo’s death was not an accident, and familiar with investigative techniques from previous brushes with crime, Emma takes it upon herself to dig through the events of the evening and uncover the murderer.

Thus Maxwell sets the story in motion as Cleo uncovers clues and suspects begin to grow in number. And the number is such that Emma will uncover dirty histories, other deaths, a theft or two, and problem relationships that all seem to relate to Cleo’s death. Finding the true murderer will not be an easy task.

Ilsa Cooper-Smith, Cleo’s older sister who seems devoted to her but because of a physical deformity will never have her own debut or marriage, is in love with Patrick Floyd, a wealthy man recently widowed. Was she jealous of her sister’s popularity and could she possibly murder her sister?

Patrick appears to also return Ilsa’s affection, and yet there are questions about his deceased wife’s suicide . . . or was it?

Emma questions Silas Griggson about his seemingly false statement about being Cleo’s fiancé and her rejection of him at the party. Could such rejection and humiliation at the party cause him to murder Cleo? Emma slides Griggson onto her list of suspects.

Camille Tate, a housemaid to both Cleo and Ilsa, is carrying on a tryst with Dorian Norris, whose family is high in the Four Hundred elite, and surely his family would reject a marriage between Dorian and housemaid. Camille is discovered with diamond jewelry owned by Cleo. Did she steal it in order to sell it for a fortune, and buy her way into the social register? And did Cleo uncover her treachery? Certainly a reason to suspect Camille in the murder.

Other members of the elite and the not-so-elite bubble to the surface until Emma has more suspects than she knows what to do with.

And while setting the investigation in motion, Maxwell builds a second undercurrent when Silas is discovered to be a member of a New York gang of thugs, and Emma must now determine if this group portends a possible invasion into the higher social circle of Newport, Rhode Island.

Throughout the story, Emma is thrown into confusion since both Detective Jesse Whyte, and Derrick Andrews, the owner of the local newspaper, The Messenger, and a member of the elite Four Hundred, are courting her, and she does not want to compromise her sense of independence.

As Emma wanders through the maze of suspects, gangs, and social diversions, she is caught in a whirl of emotional personal questions, as both Jesse and Derrick each continue to pursue her.

Maxwell plants the right clues that lead to the wrong conclusions and makes the reader go back and rethink whom the murderer—or murderers—might be. Right up to the very end, when she places Emma in a life-threatening situation, the reader will wonder, “Who the heck committed this crime!”

She has a unique writing style and her story arc rises to the occasion of a true page-turner. Her characters, both major and minor, are three dimensional—the kind the reader really wants to love or hate. Her setting in the gilded age of Newport Rhode Island is clear and believable; she places all of her characters in conflict with themselves, their situations, and with other characters.

This book is a joy to read and hard to put down.