Murder Is a Must (A First Edition Library Mystery) 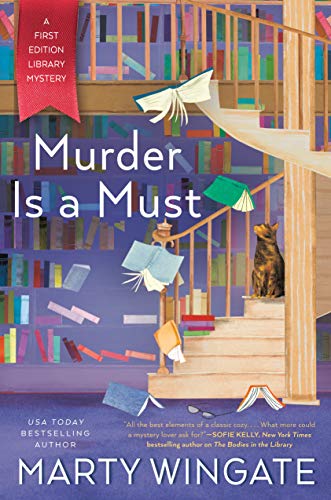 “As cozies go, this one is well written with some good twists and turns to keep the reader turning the page.”

Hayley Burke is embarking on a new life as the Curator, First Edition Society, an organization first started by Lady Georgiana Fowling to celebrate the Golden Age of Mysteries, and in particular the female writers of that period.

Hayley, a mid-forties woman, a divorcée with a new relationship blossoming and a twenty-something daughter, Dinah, has the world at her fingertips. It would just be nice if her fingers could grasp the unfolding challenges before her.

Hayley forges ahead with plans to improve the society’s finances and its standing in the community as she embarks on a series of weekly programs discussing the various issues of crime. An interesting start, but not as impressive as her goal to launch a program celebrating the life of Lady Fowling and her society, set for April, a mere two months away.

Life should be so simple, but of course, it is not. Her challenges start with Mrs. Glynis Woolgar, secretary of the society, who is not the warmest of people, and not ready to accept her new boss, and then there is the board of six women, three of whom appear to have little use for Hayley—and so the challenges continue to mount up.

The second challenge she faces is to find a signed first edition of Dorothy L. Sayer’s book, Murder Must Advertise, not only signed by the author, but also signed by renowned members of the Detective Club of the time. Hayley has discovered a cryptic note in Lady Fowling’s handwriting hinting at the location of this elusive first edition. But the book was hidden by Lady Fowling many decades earlier, and to find it would be the icing on the cake for the display.

The third challenge is to find a professional event manager. Her search brings her to Oona Atherton, events manager extraordinaire, and one of the most difficult women Hayley has ever had to work with. Arrogant and pushy, Oona wants something, she gets it any way she can, and she wants to be the events manager for the Lady Fowling display.

She makes an amazing presentation to the board, who agree collectively that if this program is to succeed within two months, Oona is the one to take it on. And so, Hayley meets her third challenge with as much enthusiasm as she can muster.

Enter her next challenge in the form of Zeno Berryfield, a man who considers himself to be the best events manager ever. A bit of an odd duck, he nevertheless has presented himself to Hayley as the best candidate, and yet the decision has been made. Oona it is.

That is, until Oona is discovered at the bottom of a spiral staircase, her head bashed in, and as cold as ice, and Hayley soon discovers that Lady Fowling’s note hinting about the whereabouts of the first edition, is missing. Does this missing note connect to Oona’s murder? How?

And the suspects begin to pile up: Zeno Berryfield, Oona’s strongest competitor; Clara Powell, Oona’s assistant—learning the ropes to maybe take over? And Stuart “Bulldog” Moyle, an avid book collector who covets the lost Sayer’s book, inches his way onto the list. And not to be ignored, Adele, one of the board members who has not been entirely honest about her relationship with Oona in days past. Unrequited love, perhaps? Not to be discounted is Naomi, the manager of “the Charlotte,” the venue for the upcoming event—a woman who had a previously disastrous business encounter with Oona—one she tries but fails to keep undercover.

And, of course, once Oona is murdered, the search begins again for another events manager, with Zeno Berryfield being the only candidate in town. He at first declines, then ultimately agrees.

Wingate has gathered together a number of good suspects, each with secrets that eventually surface, each with a possible motive for wanting to do away with Oona. The story progresses with the foreshadowing and red herrings that make for a good mystery, and keep the reader selecting the one they think best suits the murderer role, only to find themselves at a dead-end street and having to regroup.

Wingate’s cozy mystery is in some ways similar to most cozies, and yet it differs. Her heroine, Hayley, is not as outward in searching for clues as many cozy heroines are—the clues just appear, and Hayley cooperates with the police with every clue she discovers.

Also, as with most cozies where there is a possible side romance, in Murder Is a Must, that romance is in full bloom with Val Moffat, professor at the local university. Hayley, divorced with a daughter; Val, widowed, with twin daughters—make a good team. The romance is not hurried but moves along at a comfortable pace.

As cozies go, this one is well written with some good twists and turns to keep the reader turning the page.