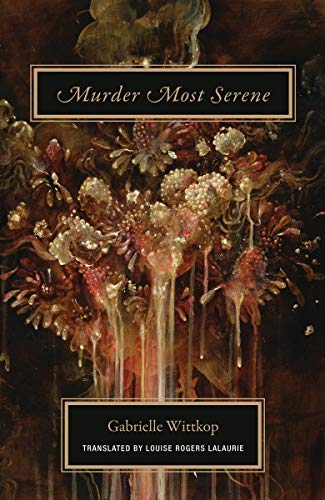 Venice, renown the world over for its beauty and riches, becomes the setting for Gabrielle Wittkop's Murder Most Serene. The slim novella opens in the latter days of the Serene Republic of Venice, in 1796. Corruption, both moral and physical, run rampant, creating a fetid atmosphere of gorgeous decay and depravity.

Events center around the unfortunate household of Count Alvise Lanzi, an elderly bookish aristocrat whose wives mysteriously end up dying. The mysterious deaths are not investigated Agatha Christie-style, but create a curdled and festering air of conspiracy and rumor. This isn't Venice with beautiful sunsets and romance on the lagoon, but a city of labyrinths, poisonings, freak shows, obscene wealth, and moral bankruptcy.

Amid the depravity and death, Napoleon is on the march. Wittkop's words shimmer with dark brilliance, deftly translated from the French by Louise Rogers Lalaurie, and manipulate the narrative into her own personal bunraku puppet theater. But the artificiality doesn't seem intrusive or come across as a postmodern wink, instead it reflects Venetian society. It is a society slowly sinking into the lagoon, oblivious to the seismic political shifts, at play in bordellos or during the annual masquerade.

The prose flows forward, violent, luxurious, and bitchy. Scenes alternate between opulent descriptions of death and sickness to snippets of gossipy dialogue to a letter writer addressing his “dear Siren.” Imagine The Grand Budapest Hotel but rewritten by John Waters and directed by either Luchino Visconti or David Fincher.

Wittkop writes purple prose, inasmuch as it possesses a gaudy excess, but this is excess rendered with precision, irony, and humor. In Lalaurie's introduction to the novel, she tells about Wittkop's unique embrace of Eros and Thanatos. An autopsy is described with delicious sensuality. “Carved in gray, the brain, smooth as soapstone, lies in a nearby bowl. An appetizing morsel. Moist and pink, the thorax is emptied, a gaping wineskin, slit wide open in a mocking replica of the lifeless vulva, opened by mistake and yawning, dead, beneath the swollen mons, the simultaneous slackening of two stupidly vertical mouths.” Wittkop rides the fine line between beauty and horror.

Count Alvise marries again and again his bride dies. Each successive victim becomes the object of rumor and gossip, the Venetian chattering classes blissfully unaware of Napoleon's conquest of their Serene Republic.

The book doesn't feel like it was written in 2002. It seems like a distaff cousin to Jean Genet's hallucinatory revel in depravity and murder, Our Lady of the Flowers. To tag it as a “historical fiction” would do the novella a severe injustice. Even though the Venetian gossip exhibits a lived-in authenticity, the novella possesses a formal daring and a gleeful disregard for morality ill-suited for the confines of middle-class literary realism.

This isn't simply a transcription of past events, but a kaleidoscopic vision of a society on the verge of moral, physical, and political collapse. The inevitable death of the Serene Republic rendered in a precocious admixture of apocalyptic foreboding and arch comedy.