Murder at Morrington Hall (A Stella and Lyndy Mystery) 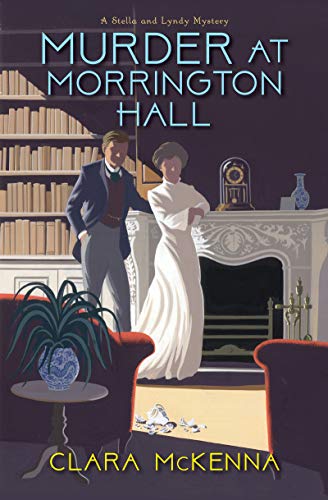 “A charming first entry in a new series, introducing an investigative duo who are at the same time exact opposites while being obviously made for each other.”

American heiress Stella Kendrick was thrilled to be invited to accompany her father to England for the sale of two of his thoroughbreds, until she arrives that is, and discovers the horses are part of her dowry and she’s to marry their new owner.

Viscount Lyndhurst—“Lyndy” to his friends—definitely wants the horses, but he isn’t particularly wild about getting married, especially to an American, heiress of not. Nevertheless, his family needs the money the stallion will bring after one of his colts wins the latest Derby.

“Perhaps Miss Kendrick will be one of those radical Americans we’ve all heard of,” Lyndy said. “Maybe she’ll drink Irish whiskey instead of coffee after dinner.”

When the two are introduced, it definitely isn’t a meeting of the hearts, though Lyndy finds Stella so different in her attitudes he’s definitely intrigued. He learns soon enough she has no intention of marrying him, but he likes the way she keeps her chin up when his fellow peers openly insult her, and how she hides her pain when her own father does the same.

He’s also determined to go through with the wedding.

“I, too, had no choice in the matter. It was marry an heiress or give up everything. I have no intention of forfeiting my ancestral home, my title, or those lovely horses, so unless you know a better way, we must abide by our families’ wishes.”

Later, Lyndy offers to take Stella on a tour of the manor house while they look for the vicar who’s to officiate at the wedding when that guest fails to appear.

They find the vicar, all right, but he won’t be performing any weddings—ever—for the poor man is face-down in His Lordship’s library, his head bashed in with a poker.

Thus begins the investigation into the death of the Reverend Bullmore, in which Lyndy and his American fiancée soon find themselves not only involved as witnesses but also in solving the crime. There are plenty of suspects, and even more after one of the wedding guests is assaulted and her jewelry stolen, and a gambling scandal in which Lyndy’s best friend may have been involved, but—at least as far as Stella’s father is concerned—the worse crime is yet to come. Orson, the stallion that is part of Stella’s dowry, sire of the current Derby winner, is stolen.

Stella’s certain she knows whodunnit. No one wants to listen to a woman, however, for everyone know how delicate they are and how hysterical they become at the least provocation, and Americans—well, they act so oddly, no one can believe them anyway.

This is not only a historical cozy mystery, but also a very good comedy of manners. Set in a time when a great many American women, the so-called “Million Dollar Princesses,” were being married to British nobility to gain their nouveau riche parents prestige and the peerage their fortunes, the story immediately points out the difference in attitudes between the societies of the two countries. Stella is considered ill-mannered, ignorant of social niceties, and much too outspoken while Stella is astounded by the arrogance, rudeness, and inbred belief in British superiority.

Actions and expression taken for granted on this side of the pond are definitely frowned upon on the other.

Only Lyndy manages to see past their differences to the frightened but angry young woman who’s been tricked into marrying him.

A Murder at Morrington Hall is a charming first entry in a new series, introducing an investigative duo who are at the same time exact opposites while being obviously made for each other.