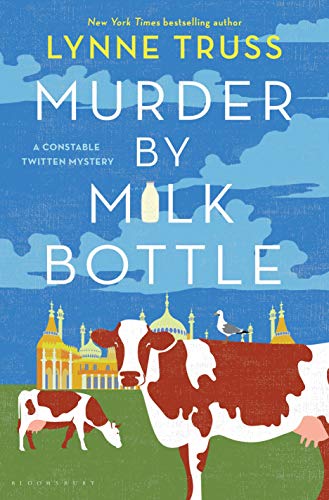 “Full of British humor as well as a wealth of description of Brighton in the late Fifties, Murder by Milk Bottle is the best of the Constable Twitten novels thus far—at least until the next one is released.”

As the introduction states, “the action of this book takes place over the weekend of the August Bank Holiday 1957, and what a weekend it is!”

At that moment, Constable Peregrine Twitten of the Brighton PD, is going about his self-appointed “rounds,” and mulling over the hand fate has ironically dealt him, namely, that:

“1) He has discovered that the police station charlady, Mrs. Groynes, is in fact a cunning criminal mastermind in disguise, and

2) Mrs. Groynes’ brilliant countermove involving bogus stage hypnotism rendered it impossible for Twitten to convince others she isn’t what she seems.”

As a result, Mrs. Groynes is still running free, making tea for the constables, and keeping one step of the police by learning their plans.

Things are happening in Brighton, however, that make Twitten’s concern over Mrs. Groynes pale in comparison.

The first is that Constable Brunswick (he who is forever being shot in the leg and ending up in hospital whenever a crime occurs) is stood up for a date with a pert young miss who seems disproportionally interested in his bullet wounds.

The second is that the heads of criminal groups from all over England are converging in Brighton for a summit meeting of sorts, headed by Mrs. Groynes and her partner-in-crime, Terrance Chambers.

The head skater at the Ice Circus has gone missing, the barber’s son has just bought a gun to avenge his father’s not being allowed to enter the barber of the Year competition, and the Brighton Dairy Festival finally has a rival.

Everything is set in motion by a call from a frantic reporting the death of Office Andy of the Automobile Association Brighton Control, followed by reports of further crimes nearby.

“It was bad enough that one murder should disturb his self-prescribed rest cure, but three? One was a beauty-contest runner-up barely old enough to have enemies; the second, a much-loved AA patrolman of spotless record; the third a visiting radio celebrity.

From there, it’s a merry chase to discover the whos, whats, wheres, and definitely the whys of the situation—and Twitten and Brunswick need to hurry to solve the case, because, as Inspector Steine laments, “They’re calling Brighton the milk-bottle murder capital of Great Britain.’”

With a little romance thrown in for Twitten as he discovers the now grown-up daughter of the family with whom he’d roomed the year he decided to become a police officer, and the threat of a wily reporter deciding to ruin Inspector Steine’s reputation because it’s a slow day at the newsroom, there will be more dead ends, wrong turns, and a fantastic drawing together of the tangled skeins of the crime(s) before the Bank Holiday comes to a close.

As in the two previous novels in this series, the Pythonesque adventures of the benighted Brighton PD will evoke laughter as well as astonishment at the way author Truss creates totally unrelated incidents—and often seemingly trivial events—then cleverly draws them together to show they are related after all.

There’s a little more delving into character in this novel, however, as Twitten begins to realize that perhaps his colleagues don’t always want to have everything explained to them in such detail by a know-it-all constable; nor do they care to have it revealed how totally ignorant they are in some matters—even if they actually are.

Brunswick gets a good psychological going-over, as well, that may or may not send his love life along more productive lines, and Inspector Steine—?  Perhaps the less said about the good Inspector, the better.

As for Mrs.Groynes, the old girl will undoubtedly come out on top for a long time to come.

Full of British humor as well as a wealth of description of Brighton in the late Fifties, Murder by Milk Bottle is the best of the Constable Twitten novels thus far—at least until the next one is released.