Murder at the Mena House (A Jane Wunderly Mystery) 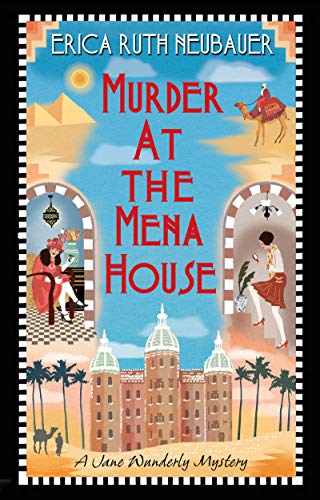 “Murder at the Mena House reflects a much more glamorous and gentler age of sleuthing, when the detective wore a tuxedo instead of a trench coat and his lovely companion didn’t merely sit around and wait to be rescued from the villain’s clutches.”

Upon their arrival in Egypt, Jane Wunderly’s Aunt Millie expects her widowed niece to become acquainted with some of the available men at the Mena House where they have reservations.

Having escaped a nightmare of a marriage when her sadistic husband died in the Great War, the last thing Jane wants is to become romantically involved—until her aunt maneuvers a meeting between her and Redvers.

“Handsome men were not my concern, especially ones with post British accents.”

Is it his first name or his surname? No matter. There’s an immediate attraction though Jane won’t admit it. He’s handsome, erudite, and definitely a gentleman.

I burst out laughing. “You look too dangerous to be a banker.”

Learning the truth about Redvers’ name will soon be the least of Jane’s worries.

When Colonel Justice Stainton and his daughter Anna arrive, Jane finds herself with a rival for Redvers’ attention. At least Anna seems to think so, even going so far as to pour wine on Jane to get her out of the way.

The next morning, when Anna is discovered dead in her room, an obvious victim of foul play, the investigating police official seems to think the little mishap the day before was serious enough for Jane to murder Anna.

The fact that Jane’s scarab brooch is found in Anna’s room aids his theory.

Redvers assures Jane he’ll prove her innocent by doing some investigating of his own. When Jane insists on tagging along and doing her own sleuthing, he can’t resist—though he strongly appears to want to.

“I’d suggest we wait and see what comes to us but I’m guessing that’s not something you can do.”

“All signs point to no,” I admitted.

Before long, there’s another death, that of Amon Samara, another guest.

Jane doesn’t want to be accused of that death also, so she and Redvers double down on their investigations—between taking sightseeing jaunts to the Great Pyramids and through the Cairo bazaars.

The more the two are thrown together, the more Jane realizes she likes Redvers, but she’s also suspicious. He seems to know too much about criminal investigation to be a mere banker. What’s a British banker doing in Cairo, anyway? Why does he know some slightly shady characters in the city? And why is he so chummy with the local police?

When Jane discovers Amon Samara was blackmailing various people, including her aunt, she believes she’s found the reason he was killed but that doesn’t explain Anna’s death.

“Despite all the years I spent with my aunt, I still knew very little about her personally. Millie kept her private affairs very private.”

Uncovering the murderer’s identity without revealing her aunt’s secret will take some finesse as the two sort through the various guests to discover if they are looking for one killer—or two.

Murder at the Mena House is a cozy mystery reminiscent of Agatha Christie’s novels set outside England (Death on the Nile or Murder on the Orient Express).

Set during Prohibition which some of the participants are escaping, the characters in this story would fit well into any cinematic mystery of the early thirties. Redvers and Jane make a lovely Nick and Nora Charles because Jane isn’t a woman to simply sit back and let Redvers endanger himself. She’s right there, getting into danger with him.

With a cast diverse as well as interesting, this novel is good one for some quiet and enjoyable reading. Far from the hardboiled detective “shoot-’em-ups” that would fill the bookshelves as the Second World War rolled around, Murder at the Mena House reflects a much more glamorous and gentler age of sleuthing, when the detective wore a tuxedo instead of a trench coat and his lovely companion didn’t merely sit around and wait to be rescued from the villain’s clutches.

It also features that give-and-take between the two main characters that makes this kind of reading so entertaining.

“Do you enjoy arguing politics with a woman?”

“I prefer an argument with an intelligent woman over two minutes with a simpering one.”

“I assure you I never simper.”

It’s a fun book, in spite of having murder as its subject, as well as an absorbing series first entry.

When Redvers says at the end, “I’ll be seeing you again, Jane Wunderly. Don’t you worry,” it’s a promise, not a threat, and the reader will also be looking forward to their next meeting.

Bring on the sequel!