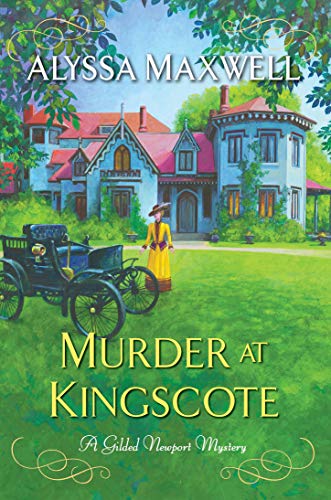 “Throughout the story, Maxwell weaves new and enticing situations that make the reader turn the page.”

It is July 1899, in Newport, Rhode Island, and the town faces the end of one century and the beginning of another with excitement. Life in America is facing major changes, not the least of which is the introduction of the horseless carriage, and Newport is holding its first motor vehicle parade. The entire population of Aquidneck island is decked out in its “frippery.”

Emma Cross, newly named as editor-in-chief of the local newspaper, Messenger, walks along the parade route admiring the vehicles—equally decked out—owned by the wealthy Four Hundred. She is joined in her walk by Derrick Andrews, her boss and sweetheart; it cannot be a better day.

Emma’s position in the community is well known, and although she is only distantly related to a member of the Four Hundred—specifically to Cornelius Vanderbilt—her own life does not carry such high position. She travels on the edge of the wealthy society of the island, not fully accepted yet not fully rejected, and her heart belongs to Derrick, scion of a Providence publishing family. It’s a mutual appreciation.

Of course, all good days must have something happen, and when Philip King, scion of the wealthy King family, and under the influence of alcohol, steers his auto into a street decoration, the crowd rushes to watch. Fortunately, no one is injured, and Philip seems not to notice.

Derrick and Emma are invited to Kingscote, the home of Mrs. Ella King, Philip’s mother, and during dinner, Philip arrives late and drunk. Within moments of his arrival, a commotion occurs outside and as the guests rush to learn its cause, they discover the body of Mr. Baldwin, the family butler, pinned against a tree by Philip’s automobile. Phillip claims to know nothing about it when the police arrive with an ambulance.

The next day, Baldwin dies, and Philip is in hot water. Emma’s experience with solving crimes does not go unnoticed, and Mrs. King asks for her help in proving Philip’s innocence. Tension builds as the local citizens demand true justice, knowing that a wealthy son will most likely get off for committing murder. In spite of her background with the Vanderbilt’s, Emma is respected in the community and calms the crowd.

As Emma, with Derrick’s help, begins to unpeel the mystery, suspects begin to pile up. Olivia Riley, a housemaid at Kingscote has secrets that put her in the spotlight; Donovan, one of the house servants, hides his own secrets that also bring him into the spotlight. But not only the employees are questionable—Francis Crane, a wealthy young man and a friend of Philip’s—keen on Gwendolyn King, Philip’s sister, has motive to see Baldwin injured.

Maxwell creates a strong cast of characters and weaves a web of mysterious events throughout the story. Specifically, does the King family deserve the wealth they enjoy or was it come by through unconventional means?

As a side story, Maxwell introduces Mrs. Eugenia Ross, a woman who claims she is the only person who has a legal claim to the King fortune. The family history is tarnished from decades earlier when William King, the head of the family, was committed to an insane asylum while his family took control of his wealth.

Mrs. Ross took advantage of that and ingratiated herself with the patient, learning about the family history and she has spent years suing for what she believes is rightfully hers. Her efforts have not been successful, but that has not stopped her from pressing forward.

Here the story widens when Emma and Derrick travel to the insane asylum to gather more information about the King family history where they meet Henry Ainsley, a patient and once well-known boxer who, through one especially hard-fought match, was injured and is now living in the insane asylum.

Emma meets with Mrs. Ross, and another suspect is added to the growing list. But Emma believes the answer lies in the household, and with Mrs. King’s acceptance, Emma places one of her reporters in the house as the new butler, where he can conduct a quiet investigation of the servants.

The web Maxwell has designed continues to grow and tighten, and a second murder occurs at Kingscote when another young servant is found drowned in a barrel of rainwater—a curious situation since no one can imagine what he might have had to do with Baldwin’s death. Throughout the story, Maxwell weaves new and enticing situations that make the reader turn the page.

At the end of the story, not to be a spoiler, Maxwell expresses one situation that makes a lot of sense, until it doesn’t, and the reader is surprised and pleased with the satisfying conclusion to the story.

A good, short read, this one belongs on the library shelf.