Murder at Keyhaven Castle (A Stella and Lyndy Mystery) 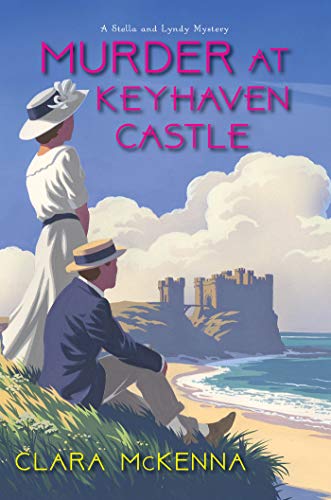 “Even with murder involved, the sprightly dialogue, interesting characters, and intwined intrigue offset the violence so the cozy mystery air—turn-of-the-century style—is easily maintained.”

It’s only a few days until Stella Kendrick’s marriage to Viscount “Lyndy” Lyndhurst, the event for which Stella’s father brought his daughter to England, offering her to the impoverished aristocrat’s family in marriage as well as a good portion of his own fortune. All so he could brag of his relationship to British nobility.

Luckily for Stella and Lyndy, the two young people fall in love, and in a short time, Stella will be free of her father’s domination and married to her beloved viscount.

Guests are already arriving for the wedding, though some of them Elijah Kendrick would rather not see, and swears he didn’t invite. Such as his brother Jed, and Stella’s Aunt Ivy, who was the girl’s mainstay after her mother’s untimely death until the day Elijah and Ivy had a terrible quarrel, and she was never allowed to see Stella again.

There are some people Stella doesn’t care to see, either, specifically Penelope Swenson, a childhood friend arriving with her parents. Penny and Stella have a rivalry, all on Penny’s side, and now the snide Miss Swenson sees Stella’s wedding as a way to snare a titled husband of her own.

Soon, however, Penny’s gibes are forgotten as two events occur in succession.

An accident at the docks brings a momentary lull in the feverish preparations when Jessie James Prescott is trampled and killed by a runaway horse team and wagon.

Investigation reveals that Prescott was an American jockey, disbarred from racing in the States because of his involvement in drugging horses and other nefarious acts. The belief is that he came to England to continue racing and was accidentally killed.

The second occurrence is more devastating and personal.

In an attempt to entertain Uncle Jed’s two young children, Stella arranges an all-day tour of nearby Keyhaven Castle, only to have it turn into a family affair when the Swensons and Penny, as well as Lyndy’s cousin, Sir Owen, Elijah, and Jed, tag along as well.

In a short time, Stella hears a cry and finds a body lying at the foot of the castle stairs. First glance tells her it’s her Uncle Jed, but a closer look brings a more personal shock.

Stella’s reactions startle even herself. Now she’s free of her father’s domination, but she feels guilty because she can’t experience the grief the loss of her father should bring. She’s also angry that Elijah won’t be there to see his goal of his daughter marrying a British noble, and she also wants revenge for her parent’s death.

When Sir Owen is arrested for Elijah’s murder, Stella can’t believe Lyndy’s cousin had motive to kill Elijah, and she’s determined to prove it. The resolution of the case will bring more revelations than merely the identity of a killer, stretching back to events happening in America in the distant past, and some of them will change Stella’s opinion of her father forever.

It will perhaps be a shock to some readers when the author kills off one of the major characters, but it certainly leads to some exciting revelations and a great deal of background story about the late Elijah Kendrick. It would seem there were several people with cause to want him dead. In comparison, Penny Swenson’s catty dislike of Stella seems mild.

With the introduction of Elijah’s brother, as well as the Swensons from America, there’s more contrast between the so-called new American “aristocracy” and the well-ingrained British one.

Lyndy has a few moments of uncertainty when he wonders if Stella will still marry him now that her father is gone. He also gets a chance to throw his weight around a bit as a privileged nobleman when he believes the investigating officers are bullying Stella, but all in all, he’s still the likable young viscount who’s perfectly willing to assist his fiancée in an investigation that will discover who killed her father.

No spoilers are included here, except to say there are several surprises in store for Stella before the villain is brought to justice, surprises that could offer plots for future novels.

Even with murder involved, the sprightly dialogue, interesting characters, and intwined intrigue offsets the violence so the cozy mystery air—turn-of-the-century style—is easily maintained.

This is the third entry in the Stella and Lyndy mysteries series. With the two now married, new vistas of crime-solving are opened for the couple, perhaps one or two on this side of the pond.