Murder at the Courthouse: A Hidden Springs Mystery 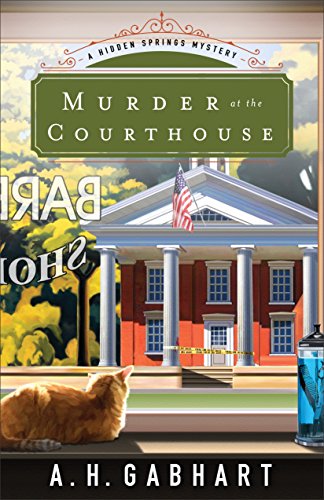 Born and raised in the small town of Hidden Springs, Kentucky, Michael Keane leaves all that he knows and travels to the big city of Columbus, Ohio, where he becomes a police officer. While serving there, his eyes open to the cruelty and inhumanity of man, as well as all the stress involved with urban life.

Fed up with his new reality, Michael moves back to comfortable Hidden Springs and assumes the job of deputy sheriff. Life is mostly serene in this quintessential small town, and Michael settles quickly into a routine of handling traffic accidents, writing parking tickets, and chasing a petty thief every so often.

One day that idyllic existence is shattered when a man turns up murdered on the steps of the courthouse. Shortly thereafter, another body is found—the beloved town barber. With no evidence or eyewitnesses, it seems the murdered stranger and the barber are enigmas that may never be solved.

As the story develops, the author introduces myriad characters that flesh out this likeable story. Michael himself unfolds as a person who has endured a tragic childhood. He lost his parents in a terrible traffic accident in which he also was involved and barely survived. His injuries were nearly fatal, and he suffered memory loss.

Then there’s the town busy body, Miss Willadean Dearmon. This sometimes-annoying woman actually finds the murder victim on the courthouse steps. Sheriff Potter, Michael’s boss, spends most of his time at the local restaurant working hard to avoid his responsibilities. Hank Leland, the curious and mostly annoying editor of The Hidden Springs Gazette, is someone who plays an important role in both the town and the murder solution. Judge Campbell, the heavy-handed bombastic town father with aspirations for state-wide political office, is involved in just about every aspect of life in Hidden Springs.

Most curious is Anthony Blake, a teen whose mother, Roxanne, turned up missing years ago. Her disappearance becomes central to a secret that’s been haunting Hidden Springs for years. Anthony is the local troublemaker and the first person cops look for whenever something turns up stolen or damaged.

Michael errs on the side of giving the kid a break, more often than not, knowing the boy’s childhood was tough and his teen years even tougher. However, Anthony becomes a key player in this murder mystery, and his character is wonderfully fleshed out by the time the book concludes.

Although readers may figure out who the murderer is before the story ends, the journey is an interesting one. There’s a love interest for Michael, as well as some twists that are not so obvious. The denouement is satisfying and ties up all loose ends.

Murder at the Courthouse is a comfortable, enjoyable read that introduces a pleasant venue with a cast of engaging characters. Readers will likely clamor for the next installment of this new series.