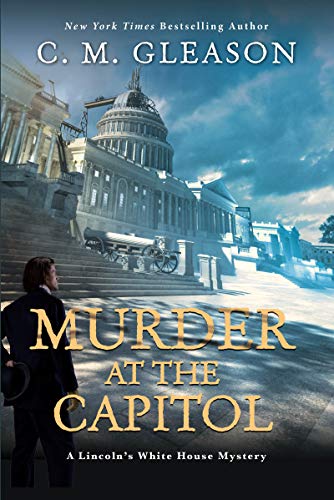 “Beginning with that very first sentence, this novel is definitely one for the historical mystery buff. One can feel the authenticity of Gleason’s research in in the opening paragraphs.”

Washington, DC, may be celebrating Independence Day as if there’s no war, but the undercurrent of tension in the city isn’t to be ignored.

Having just solved one murder case for the president, Adam Speed Quinn, the one-armed frontiersman and confidant of Abraham Lincoln, would be glad to simply rest in his room at the President’s Mansion, now being familiarly called the White House by Mr. Lincoln.

“Rest” won’t be in Quinn’s vocabulary for a while, however, for another body has been found, this one hanging from a crane used in the construction of the new Senate wing. There’s also a suicide note, or that’s what everyone is supposed to think.

Sophie Gates, who, along with Constance Lemagne, happens to be one of those discovering the body, knows exactly what needs to be done.

“Who do we send for? Pinkerton?”

“No, wait,” Sophie said, then paused, shocked by how her shout reverberated within the round space. “We must send for—”

Quinn is quick to realize it’s another case of murder, and Dr. George Hilton, asked to perform the autopsy, concurs. Pinebar Tufts was a clerk at the Patent Office. He’d encouraged many applicants to get patents and become successful inventors.

Why would anyone want to kill a patent clerk?

Quinn intends to question the guard on duty that night for more information.

Billy Morris is a malingerer. He might have been on duty but not at his post. To distract anyone from asking the wrong questions, he concocts a story of seeing a mysterious figure near the building just before Piney Tufts met his end.

“The more he thought about it, the more he was certain he had seen someone lurking about the capitol after the fireworks were done. The man had been wearing a top hat, which meant he was one of the rich people in town. And there was a carriage parked nearby, a fancy one.”

A short time later, Billy is killed in the same way as the first victim.

Quinn’s investigations lead him to believe Piney might’ve been involved in a bit of blackmail, especially after he finds some letters demanding money in exchange for keeping quiet, but if Piney was the blackmailer, why would his victim return the letters to him?

As for Billy? Obviously, his fabrication was a little too close to the truth.

As if Quinn doesn’t have enough on his plate, he also has to contend with the antics of the president’s two youngest sons, Tad and Willie, as well as the behavior of three headstrong women. There’s Sophie Gates, of course, who’s quite ready to assist Quinn in his investigation and whom Quinn wouldn’t mind getting to know in a more familiar, but very proper way. There’s also Constance Lemagne, the Alabama aristocrat, also setting her cap on the president’s man, but that lady has gotten herself involved in a bit of spying for the Confederacy. The third is Felicity Monroe, another Southern belle, with a dark and deadly secret her family might kill to keep hidden.

And in the background, the city prepares for the upcoming battle at Manassas, which just might turn the tide of the War.

Beginning with that very first sentence, this novel is definitely one for the historical mystery buff. One can feel the authenticity of Gleason’s research in in the opening paragraphs.

The Battle of Manassas, portrayed in the Afterword from an onlooker’s viewpoint, is a masterful description of ironic facts, likening the viewers’ attitude of the fight to that of ancient Romans at a gladiatorial event.

“Spectators drove their carriages to Centreville, jockeying their vehicles to get the best view possible. In their Sunday best with spyglasses at the ready, they could hear the distant sound of artillery. As the troops slaughtered each other below, they ate and drank merrily.”

And then, the tide changes and reality sets in and is driven home to the Washingtonians in no uncertain terms.

“As the inexperienced Union army retreated, they caught up the spectators in their carriages. It was a mess of dust, terror, smashing and spilling wagons, carriages, and panicked soldiers. Overnight and through the next day, soldiers, vehicles, spectators, and wounded straggled into the city, exhausted, terrified, and shocked.”

With Murder at the Capitol, C. M. Gleason scores another historical hit in the mystery genre. With four more years ahead for the war, readers should expect many more entertaining entries in this series.